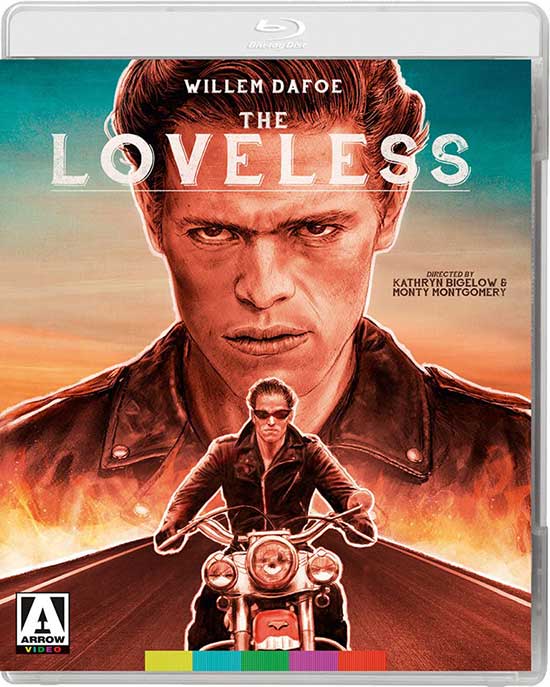 Trouble ensues when a motorcycle gang stops in a small southern town while heading to the races at Daytona.

Up until today, it was highly unlikely that I might ever review (or even see for that matter) 1981’s “The Loveless“, as a film that was generally lost and forgotten with exception of film book mentions. Though and rightly so, I am glad that it was re-released made for bluray and presented to the world to check out. Arrow films championed this one with a 2019 bluray release, of which I dove into.

Jumping back a bit, I was originally intrigued when thumbing thru a “best of” cult movies book, that made mention of this old film starring a much younger Willem Dafoe. Ok, better than that, it was really Willem’s first starring role introducing a future much-loved actor who would quickly garner all sorts of screen attention. Yes, Willem had that early bad boy look that fit this movie perfect. 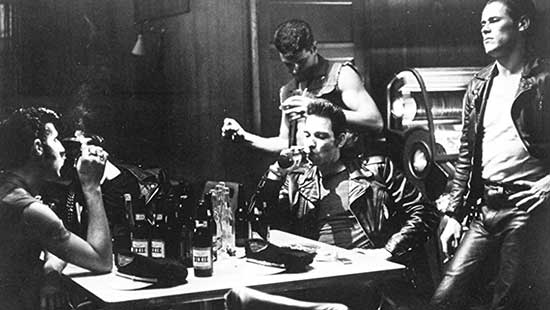 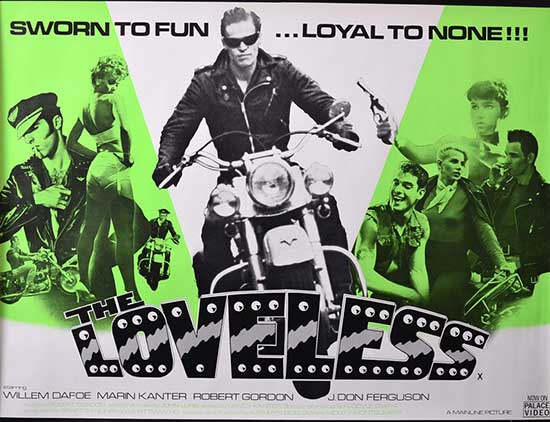 1981’s “The Loveless” Is indeed a very slow grind. I say that up front because it falls easily into that category seen in other films where the characters, the setting, and the story begin with a simmer and then cultivate into something else. That “something”, I’ve found, is usually a message, insinuation, or cinematic transformation. It could be felt in character transformations such as portrayed in the film “Taxi Driver” or with the film narrative itself such as it was in the film “China Town”. Other films that come to mind with this special quality are films such as: “Two-Lane Blacktop” and Easy Rider”

This transformation is important as some of the greatest cult films of all time have followed this trend. That trend can morph over the course of the movie or simply imply a deeper takeaway that sits long after the credits roll. “The Loveless” has that quality.

Getting to the story itself, We find Willem Dafoe playing Vance, a loner greaser and member of a motorcycle club called “The Loveless”. Nomadic, solemn, and a day-by-day survivor, Vance seems to just travel thru life figuring out its plan along the way. Playing it cool and mostly unemotional, Vance is scheduled to meet his motor cycle friends in a small town diner. 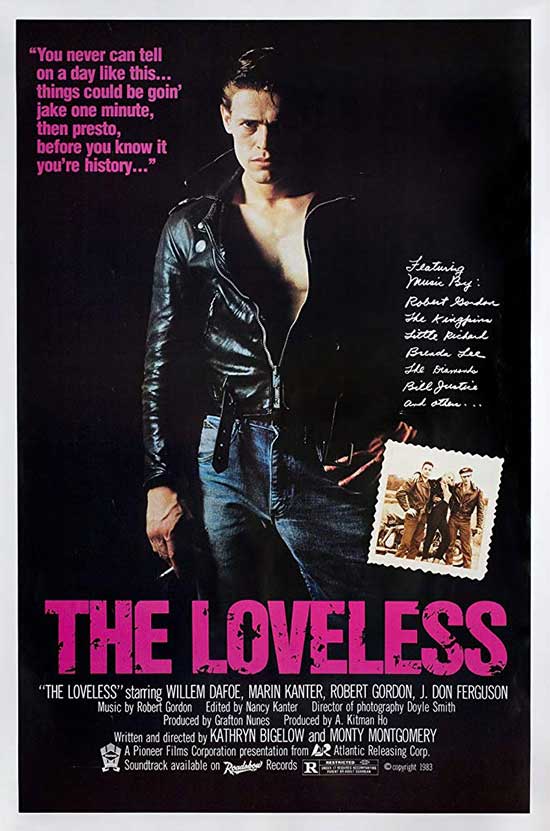 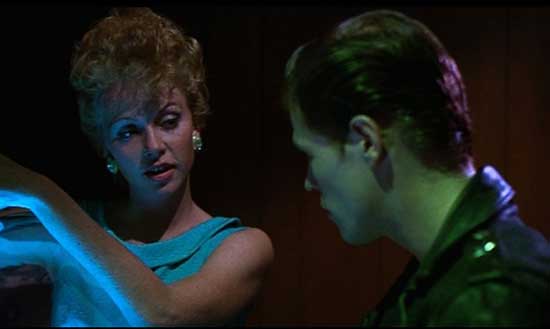 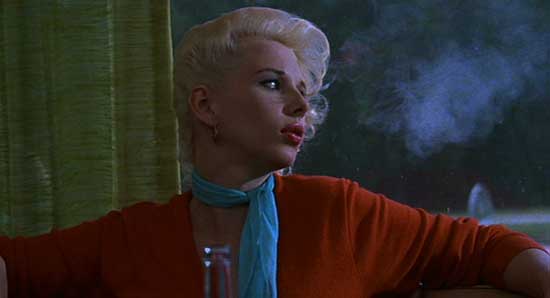 The meet eventually takes place with other like greasers gathering at the local diner. Thee local townsfolk are apprehensive as expected, however seemingly the gang plays it cool, setting up shop for a day at a local garage. As we discover thru the narrative, The Loveless are in route to a race located out in Daytona. The small southern town provides a place to rest, repair their bikes, and settle in for a bit (note: for some reason or another, they never make the race)

With the usual trend involving greasers is often to place them as the antagonists of the film, I got the sense that Kathryn Bigelow wanted to flip the stereotypes here making the locals the real antagonists, by keeping things subtle and then upping the intensity thru the emotional and conditions of living in a small town. This is further supported when a local waitress decides later to do an impromptu strip tease, or when the town business tycoon (Don Ferguson as Tarver) is seen invoking violent behavior (and for some reason sweating profusely). Even despite the gang always seeming to be doing the right thing…. paying rather than stealing, we get the sense that they are held to their stereotypes despite their civility. 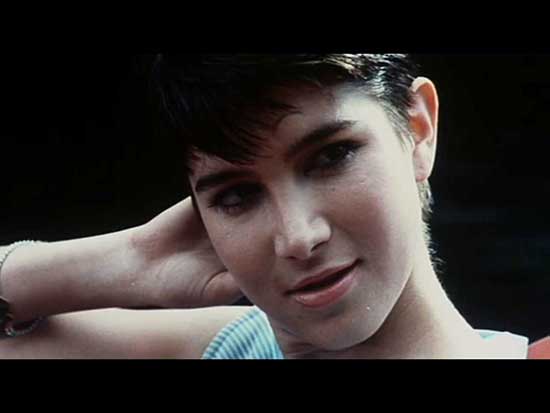 Marin Kanter plays Telena, the daughter of Tarver, who appears in the film sporting her daddy’s gifted new automobile. The scene is never more representative of the phrase, “here comes trouble”, however we find Telena to be curious and impulsive over the expectations of troublesome and antagonistic. 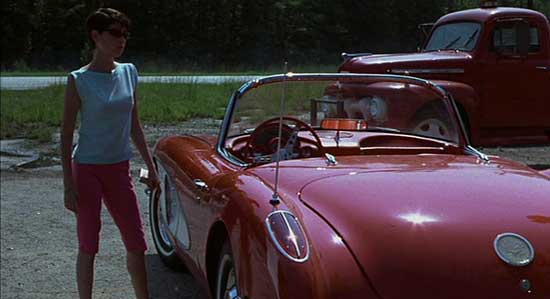 Keeping all this in mind, it all culminates to a rather brutal 3rd act. The solemn nature of Vance watching his momentary love interest Telana take her own life, is curious indeed but also reflective of the narrative that has been set (that everyone is just passing thru life with no real purpose).

We later learn much more about Telana’s past which plays into this scene with a sense of understanding and segues nicely into the bleak cold ending.

In all, this film is positioned on its drama, the small town life, nomadic living and a moment in time for those passing thru. Kathryn Bigelow has provided us with a piece that despite keeping things quaint and simple, presents to be a powerful well delivered statement about human nature. Willem acts as a center piece for the drama that ensues.

What stands out immensely here is the use of dialog and retro-fueled setting that despite being an 80’s film echoes the era of the 50’s taking its lead from films like “The Wild One”. It has a sense of authenticity that like Tarantino films, makes use of great dialog to carry its weight. 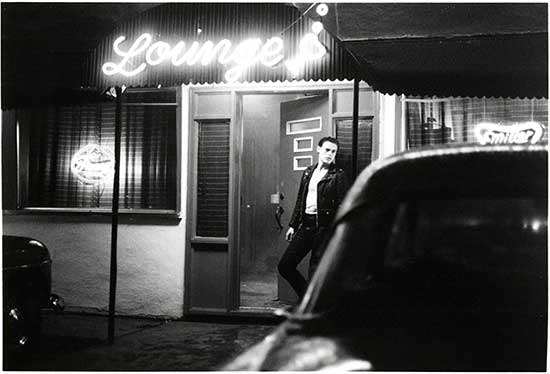 “The Loveless” was actually cult film director Kathryn Bigelow’s first feature film directorial debut. She would later come to be known for her work on “Near Dark”, “The Hurt Locker” and “Strange Days” (all films I really love). It was way overdue that I indulge in earlier works under her vision. “The Loveless” was indeed, an important earlier independent project of hers that needed some visibility.

While the film won’t satisfy most thrill-seekers it does provide a great cinematic experience that deserves attention and viewing. It was great to finally embark down that road and give this one a peek!

The Loveless is now on bluray per Arrow films