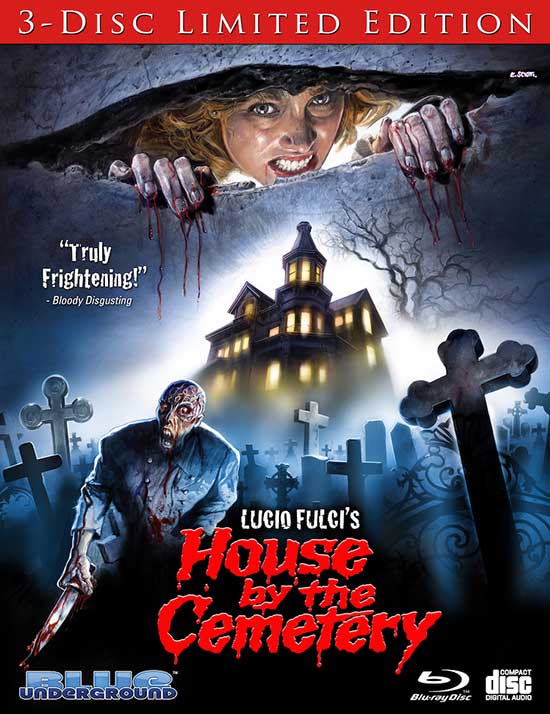 A mad scientist’s experiments unfurl on an unsuspecting researcher and his family.

The idea that a mad scientist named “Freudstein” would enact cruel experiences isn’t a very supernatural concept. We’ve seen human monsters in film. Conversely, the monstrous and ghoulish killings in this film are not at first explained by humans but rather as a curse on this bloodsoaked Victorian house/hospital.

This film is a horror fan standard along with all the films by its director, Lucio Fulci. This is a film you can start with the director to explain what’s going on, especially when he is an eccentric horror artist like Fulci.

The director is known by many in the horror world as “the Godfather of Gore.” Perhaps fans of modern gore will find “The House by the Cemetery” cheap looking and full of hit-and-miss practical effects that are hit and miss.

Still, for its time, it was very gory and what’s more, believable to its audience. The film grossed 788,460 dollars in Italy, making it Fulci’s most financially successful horror film of the 1980s. Since then it has earned untold numbers pleasing audiences. Along with the gore though, there is a clever, chilling story. Put all that together and you have a horror film for the ages. To appreciate the movie, it probably helps to know a little trivia about Lucio Fulci. 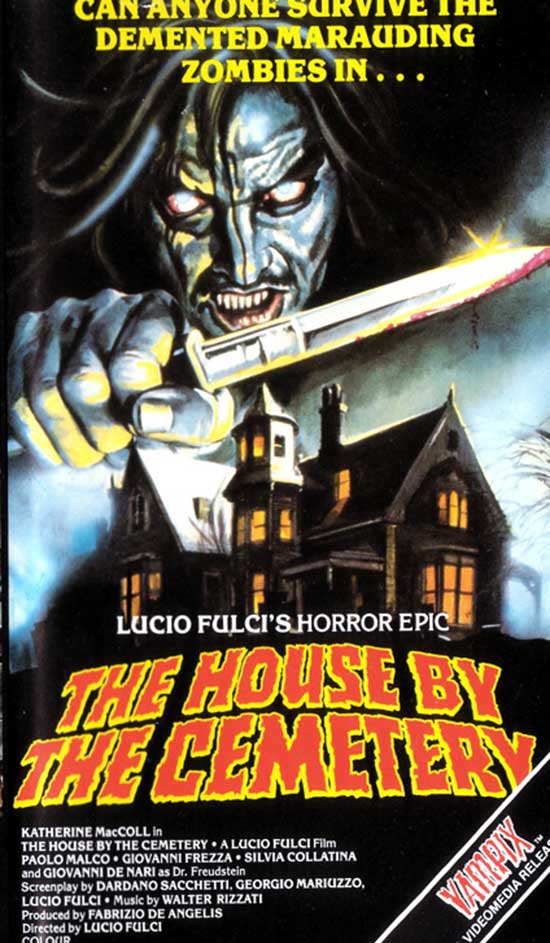 Known well for his “Gates of Hell” trilogy (City of the Living Dead and The Beyond), Lucio Fulci is clearly a dark filmmaker. Fortunately for him, that funnels right into fans like me in America who appreciate darker cinema and the poetic messages it can deliver. You’ll be shocked in the opening scene to see the gore of a woman being stabbed from the back of her skull through her eye socket. You’ll also give a final squirm at the end when an important character gets her throat ripped out. It has been said that Fulci saw death as savior. After reading that and then watching this film, I could see there was evidence to that effect.

I recall watching “The Beyond” a couple years ago and it does look a lot like this. You start to see pretty quickly, while watching, that Fulci is not just making a movie as a job. It is his horror passion coming through and I loved every minute of it. Insider trivia days the library is the same one used in both movies. I think most fans will agree there is a certain look and feel to Fulci’s work. That’s why he has been so successful in horror. I tend to fall on the side of “creepy” and “atmospheric” horror with my watchlist. I didn’t get much of that despite the foreboding sinister title. I must add though, there is a LOT of blood. I found myself thinking about the liquid latex they must make it out of.

As I close, do remember this is an Italian film that has been dubbed in English. I have to be honest I found that very difficult to get through, the quality is very poor. An example is the young boy “Bob” and his canned, overloud dubbed voice. His regular voice probably matches his head but as it was for me, he sounded awkward and older than he is. It made his head look giant (was this true for anyone out there?) Other than that, all the characters are easy to hear and understand if you just lower your 2020 film quality standards. The plot is good but erratic and the mystery is, I’d say, better than average making this staple horror film a 8/10 in my book.