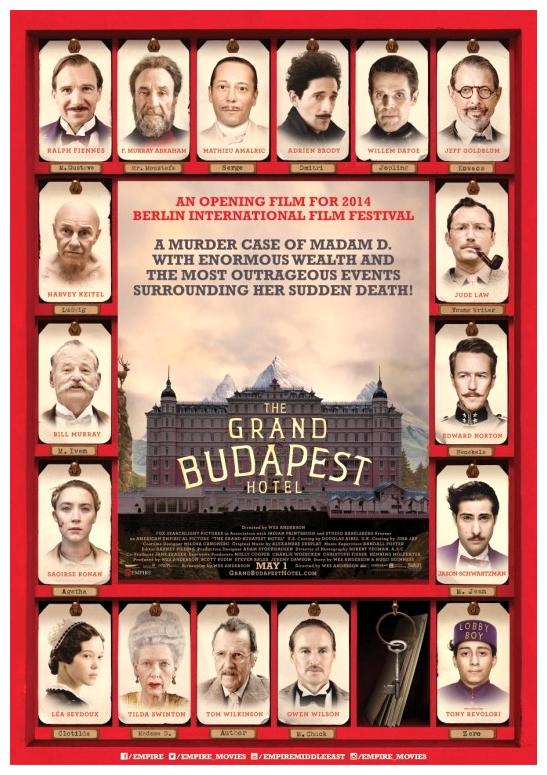 “A teenage girl visits the monument of the writer who penned the book ‘The Grand Budapest Hotel’. In 1968, that author was inspired to write the book when he visited that hotel, located in the European mountainous country formerly known as Zubrówka. Once a luxurious hotel, in 1968 it has fallen on hard times. The author meets the then current owner, Zero Moustafa, who recounts the story of how he became the hotel’s owner and why he holds onto it and keeps it open despite it obviously making him no money. Zero’s story begins in 1932, when the hotel was in its golden era. Zero was the novice immigrant lobby boy who, like all the other hotel staff, was under the guidance of M. Gustave, the devoted concierge. Gustave aimed to please, giving the guests whatever they wanted, especially the wealthy blonde women. The story largely revolves around one of those women, the wealthy Madame Céline Villeneuve Desgoffe-und-Taxis – better known as Madame D. – her opportunistic son Dimitri, the bequeathing of a valuable painting called ‘Boy With Apple’ to Gustave, the mysterious circumstances surrounding her death which is initially pinned on Gustave, and the attempts of Zero, his girlfriend – a baker’s assistant named Agatha – and others to clear Gustave’s name while Dimitri does whatever he needs to get what he believes is rightfully his, namely the painting.” (courtesy IMDB)

Isle Of Dogs (2018) was released just last week to the acclaim of critics and filmgoers alike, with Rotten Tomatoes declaring the film 92% Certified Fresh: “The beautifully stop-motion animated Isle Of Dogs finds Wes Anderson at his detail-oriented best while telling one of the director’s most winsomely charming stories.” The word ‘auteur’ – when accompanied by the word ‘director’ – usually means that this particular filmmaker’s vision is so pervasive and unique that they are to be considered the ‘author’ of a film, more so than the person who penned the screenplay. While Wes Anderson has both written and directed nine of his thirteen feature films, he is considered an auteur because of the very particular style every one of his incredible productions enlists – handmade detail, eccentric elements that are both decorative and part of the greater structure, very centred camera angles, solid text on screen, ensemble casts, several clear muses, and very erudite characters who are as whimsical as they are emotional and flawed. 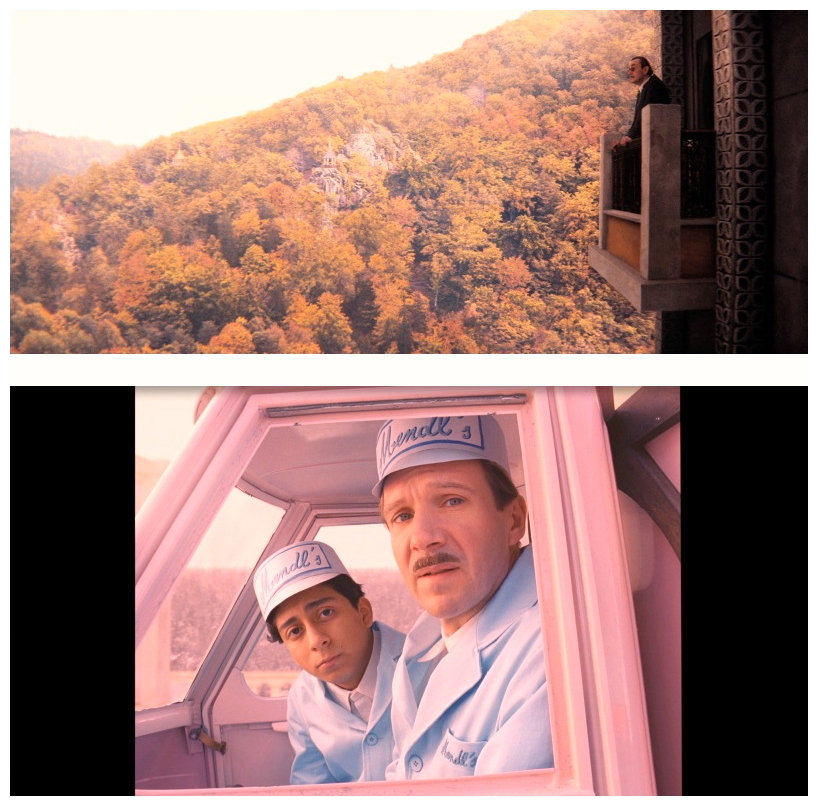 With The Grand Budapest Hotel (2014) Anderson takes us into a fictional world of caprice which is ambitious, even by his standards – the Republic of Zubrówka, an alpine European state. Named after a brand of Polish vodka, Zubrówka serves as a locale which is steeped in the historical going-ons of Europe during the thirties and forties, but also breathes enough of its own fabricated life that Anderson can insert whatever he pleases into its parameters. Producer Jeremy Dawson: “Every time Wes makes a film, it’s a whole world, and there’s a whole universe to be created along with it. Here he has created an entirely fictional part of Eastern Europe and, in Zubrówka, we find one of those great spa towns that cropped up all over before the turn of the century. The story really came from his interest in that time period, that history, that world, and also a certain type of character who is our Monsieur Gustave, the concierge at this grand hotel.” 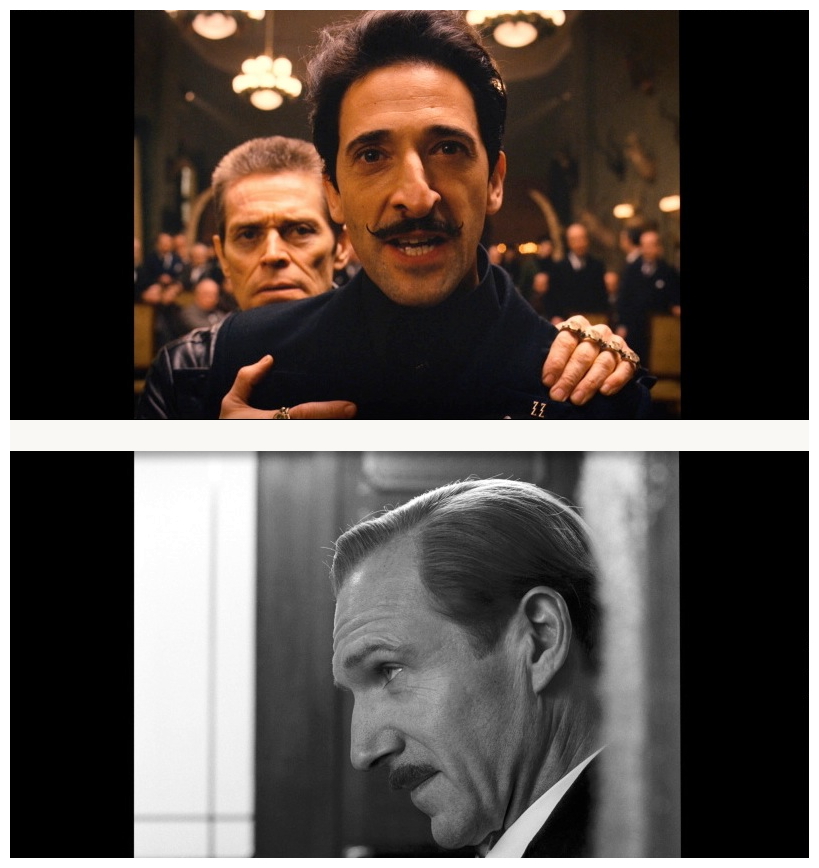 “So his idea of both the character and his entire world merged together, and Wes turned out this great script. Then the script, the acting and direction all combined to become something different even than it was on the page.” Who is this Monsieur Gustave, the lead character in Anderson’s world? As a long-time employee of the eponymous hotel, Gustave is meticulous and proud but dedicated. He is the concierge, a prestigious position to hold in such a magnificent establishment. Gustave is known for the extra attention he heaps upon the wealthy aged ladies who frequent the hotel and, when one of them dies and leaves him a valuable painting in her will, Gustave is immediately suspected of her murder. It’s these happenings which kick off the film, as Gustave embarks on a journey to redeem his reputation with the help of Zero Moustafa (Tony Revolori), a young lobby boy. 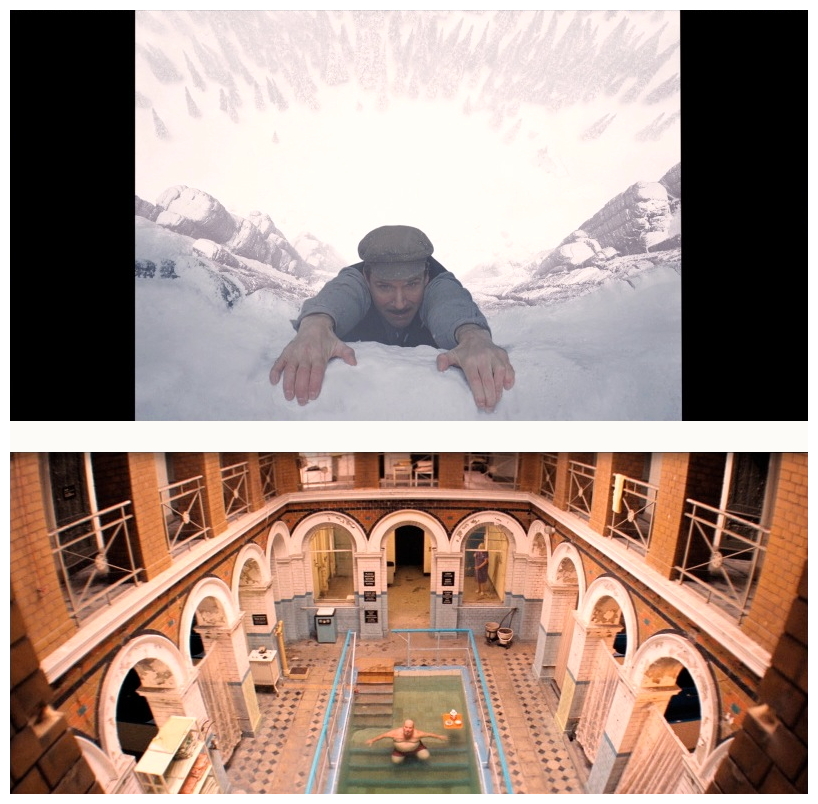 With such a detailed character in front of him, Anderson’s casting choice would have to be perfect, and he had only one actor in mind: Ralph Fiennes. Dawson: “The idea that Ralph was going to play this character enriched it completely. He just disappears into that persona until you simply say, that’s Monsieur Gustave.” Fiennes himself found the character immensely interesting: “Gustave is insecure, vain and needy, as it says in the script, but he’s also a very fastidious man who has a strong sense of principle rooted in this idea of how you look after people. To Gustave, Zero is an innocent inexperienced in the ways of the world and in need of instruction, but they ultimately become equal brothers-in-arms.” Fiennes’ co-star Edward Norton – who plays Inspector Henckles, the officer who pursues Gustave across the mountains of Zubrówka after the concierge is accused of murder – has even higher praise for the conceptualisation of the character: 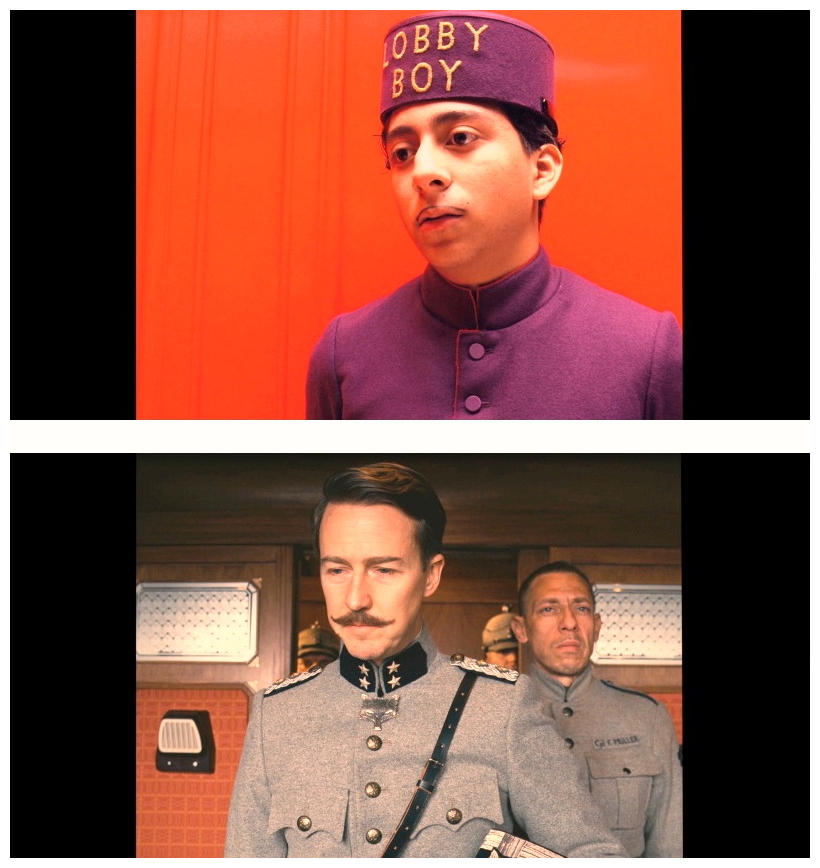 “Gustave is up there with the greatest characters Wes has created, and nobody could have played him better than Ralph. Gustave is contradictory – he has this incredibly haughty self-righteous view of proper values and, at the same time, he is ferociously loyal. He’s like a glimpse into an old world right before it disappears.” Fiennes recognises not only the singularity of a character like Gustave, but also the overarching creativity of Anderson’s approach. “With The Grand Budapest Hotel, Wes has created a true caper comedy with disguises and chases and escapes, yet there’s always that bittersweet undertone that is so distinctive. His films always have this idiosyncratic lightness of touch, inside which lies strong themes and emotions. It’s an unusual blend that no one else can repeat because it comes from inside Wes, from his personal sense of humour and perception of the world.” 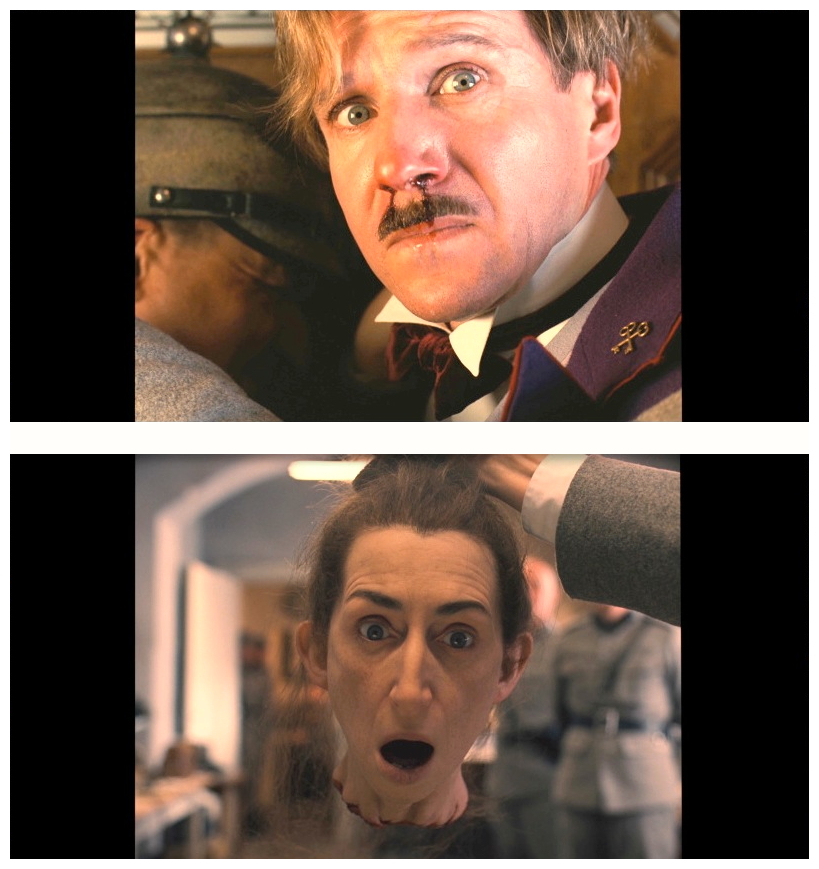 “Wes is exacting with his actors in a very positive way. He’s always refining a moment until has just the right feel, the right lightness. Speed of delivery is something he really values because this kind of material needs that kind of liveliness. Ultimately, he created his own made-up time and world where people are braver, more principled, and have much more fun.” Anderson, whose previous credits include The Royal Tenenbaums (2001), The Life Aquatic With Steve Zissou (2004), The Darjeeling Limited (2007) and Fantastic Mr. Fox (2009), delivers more of his revered (if not inimitable) style in The Grand Budapest Hotel. Anderson deploys a cast that, even by his standards, is bewilderingly star-studded, with many of the famous names onscreen for barely more than a minute or two, including F. Murray Abraham, Bob Balaban, Adrien Brody, Willem Dafoe, Jeff Goldblum, Harvey Keitel, Jude Law, Bill Murray, Saorise Ronan, Jason Schwartzman, Fisher Stevens, Tilda Swinton and Owen Wilson, but Fiennes is in the main spotlight here as the urbane omni-competent Gustave. 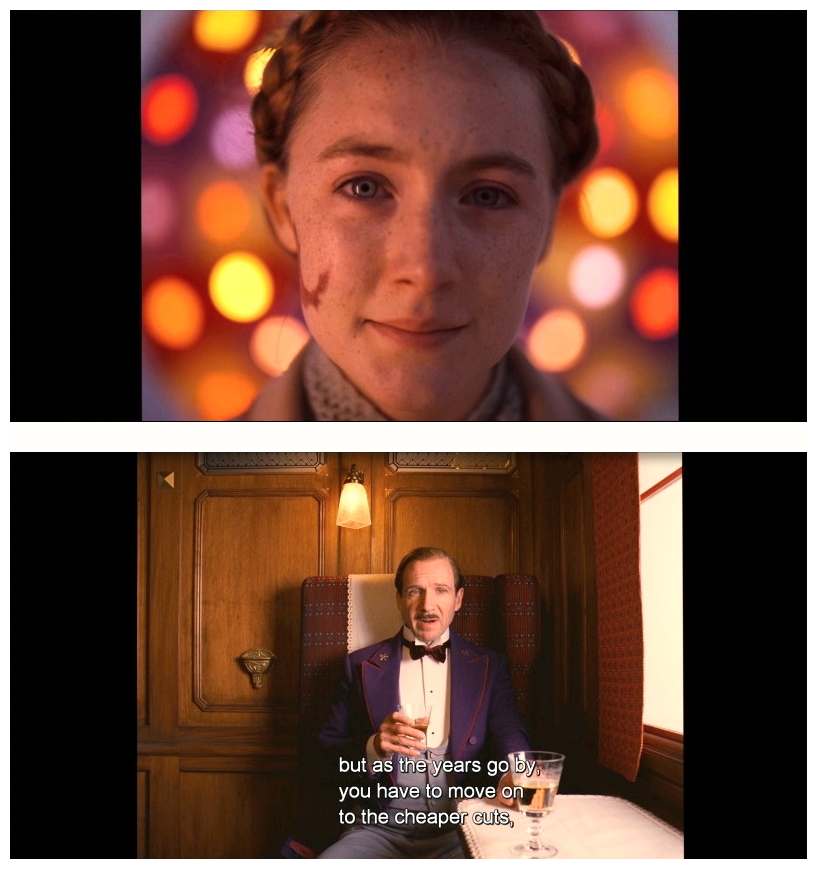 The narrative jumps back through four different time-zones (1932, 1968, 1985, 2014, each shot in different ratios to differentiate timelines), the mood is stylised comedy undercut with melancholia, and the joyously melodramatic plot includes murdered aristocrats, contested wills, purloined paintings, prison-breaks, high-speed pursuits, ejected cats, lovelorn widows, gourmet patisseries, and a secret fraternity of hotel concierges. Most of the tragedies within the film are not shown on-screen but, in one scene, a character fights several other men in a brutal close-quarter combat, killing all opponents before being stabbed in the heart. This is the only onscreen death, but the movie was still given an ‘R’ rating, not for violence but foul language. 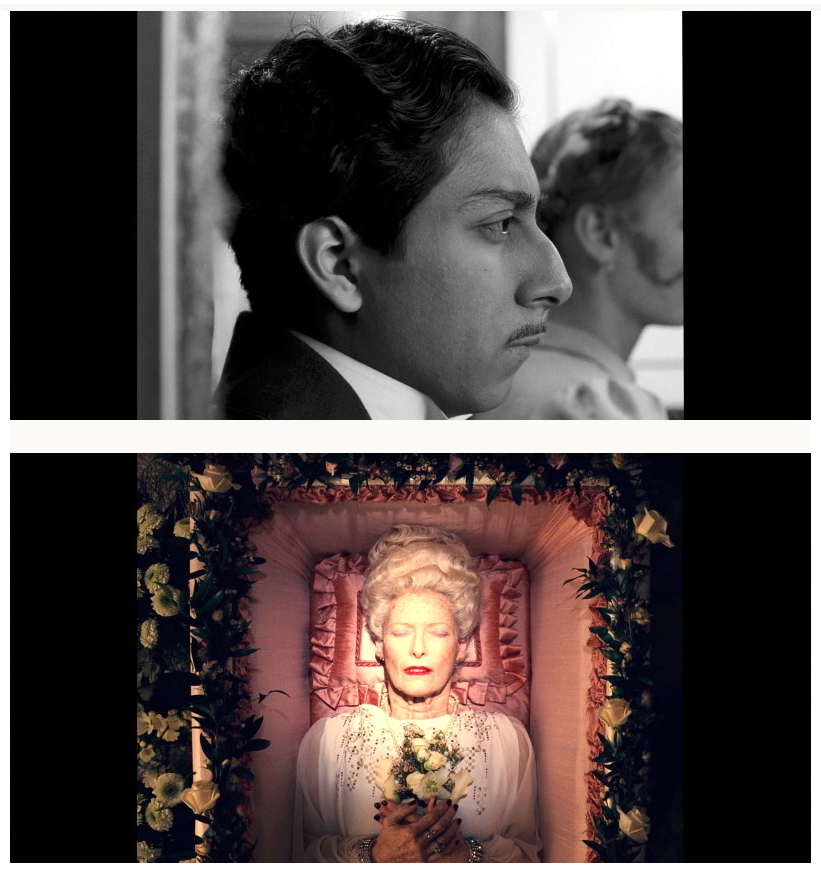 It’s a rich mixture indeed, perhaps too rich for some, but those not wedded to hard-edged realism and prepared to succumb to the charm of Anderson’s filmmaking (with its acute sense of design, playful tone and exhilarating pace), should find The Grand Budapest Hotel a delectable and unexpectedly moving experience. Above all, this is Fiennes’ film. Given a rare chance to play comedy, he demonstrates an impeccable comic timing that makes his performance as Gustave (informed by an obvious affection for the character) a constant joy to watch. On this upbeat note I’ll ask you to please join me again next week when I have the opportunity to tickle your fear-fancier with another feather from that cinematic ugly duckling formerly known as Hollywoodland for…Horror News! Toodles! 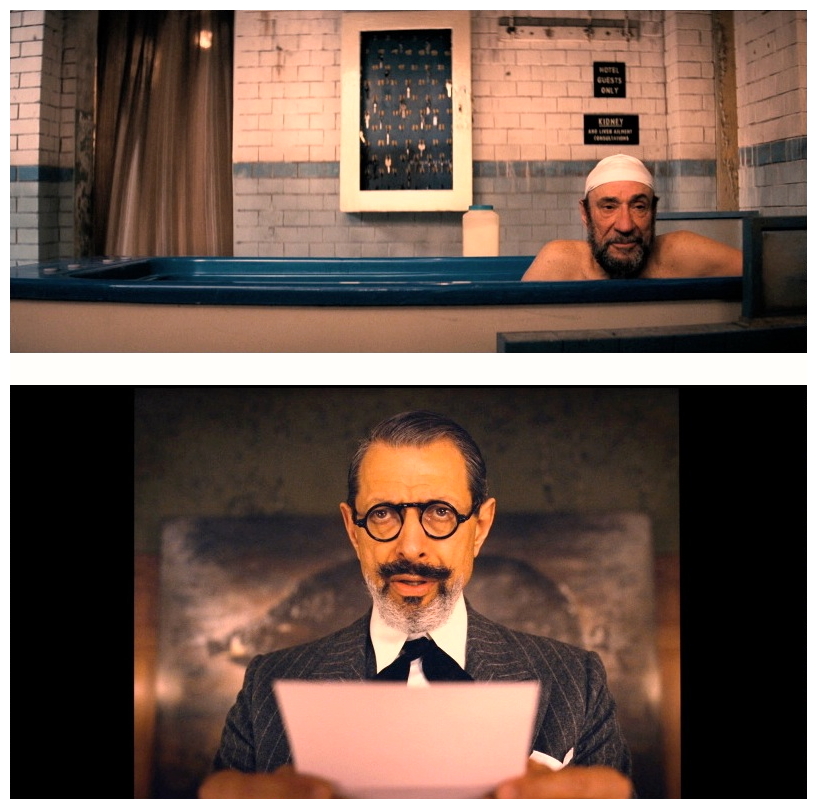