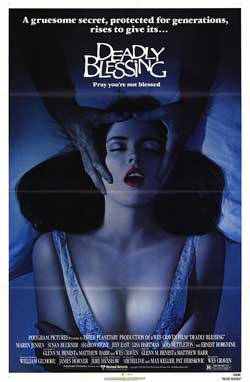 This film is set in Amish Country, at a local farm, where a woman’s husband is mysteriously killed by his own tractor!

Directed by the legendary Wes Craven, “Deadly Blessing” is much tamer fare after making the now classics, “The Hills Have Eyes” and “The Last House On the Left.”Perhaps the pressures of making his first seven figure budget movie (the budget was higher than “A Nightmare on Elm Street”) weighed down the risks he was willing to take, but there is much more character development and far less graphic scenes herein. This lack of shock doesn’t take away from enjoying the experience; rather the weakness here comes from a justified yet dull ending. 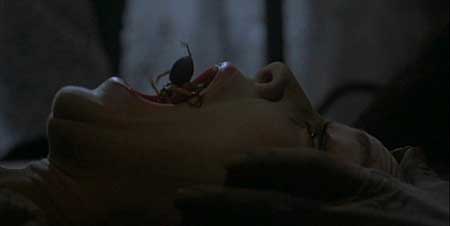 John Schmidt comes from a Hittite (a harsh, Amish-like sect) but was renounced by his family after marrying an outsider. They live on a farm near the family and clash with their old ideals, but when John is murdered with his own tractor his wife Martha must fend for herself. Maren Jensen of “Battlestar Galactica” fame stars as Martha Schmidt in what is to be her last role. While fine for the role she’s outshined by much of the cast including a fantastic and riveting performance by Ernest Borgnine as Isaiah Schmidt, the stern elder of the Hittite clan.
Two of Martha’s friends from LA come to the funeral to console her and decide to stay for a few weeks to support her. One of the friends, Lana Marcus (Sharon Stone,) is inexplicably unstable but struggles with nightmares and leads the story into some great moments of arachnophobia. She has a particularly unsettling dream where her head is held by an unseen menace and commanded to open her mouth ever wider until a large spider glides down into her open gullet. She wakes up screaming, much like I felt like doing after the scene. 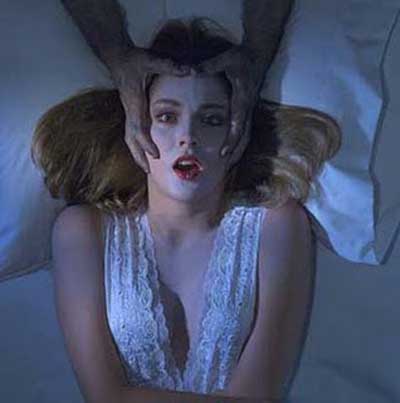 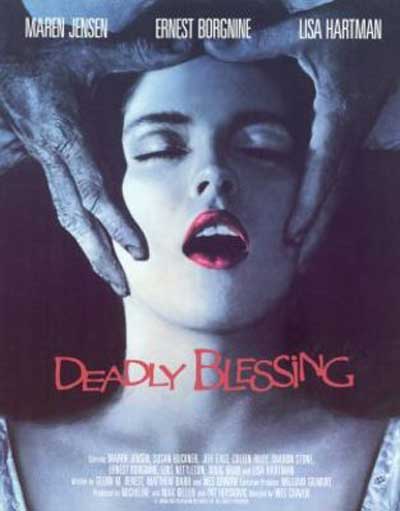 The other, Vicky Anderson (Susan Buckner,) gets involved with a young Hittite causing more strife within the already stressed situation.
Add in one of the greatest composers for film in James Horner and this should be one stellar film. It could have been one too if it weren’t for one missing piece, and a large one at that. Far too many movies make the mistake of having an undeveloped killer/ monster/ghost/ threat that is never explained or ‘fleshed out’ if you’ll allow me (I think I just made a “Hellraiser” reference.) Another movie I recently reviewed, “Behind the Wall” is a good example.

I understand the need for some mystery but there’s a line between mysterious and not having enough information to actually care. Instead, “Deadly Blessing” relies on developing the ‘victims’ so that it almost becomes a who-done-it. Just when you think you know, they get killed. When you do find out it all makes sense but seems to come from the outfield, plus there’s an additional twist at the end but feels rather tacked on. The signs were there throughout the movie but were given so little attention that it became needless to revisit. To top it all off, this was Sharon Stone’s first role in a named character and only her fourth movie and it shows. Admittedly her character was written as one of the flattest and it’s difficult to play crazy without going overboard but her youth and inexperience shows if only because of such a good ensemble. 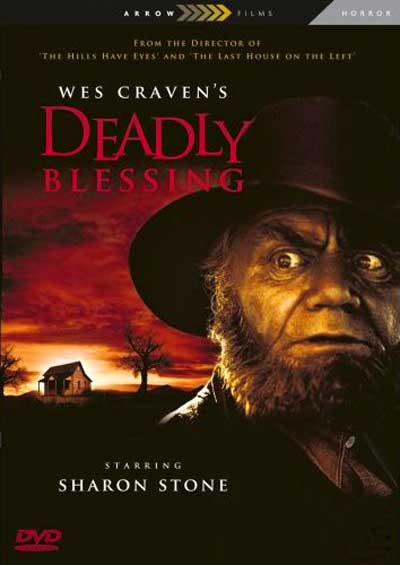 Despite the ending the script is well constructed and the characters are flawed and beset by conflict which draws in the audience to their plights. Though not very graphic the lack of onscreen violence creates a great balance between implication and giving too much away. There are many things done well in “Deadly Blessing” as well as some things that weren’t, but all of this is overshadowed by the biggest element missing from this early Wes Craven film; satisfaction. As with his other early films the endings seem to peter out but still leave you with a lasting impression that you can’t seem to shake, yet this time that mood becomes broken by the end. Despite a surreptitiously meaty movie this might leave you wanting more.