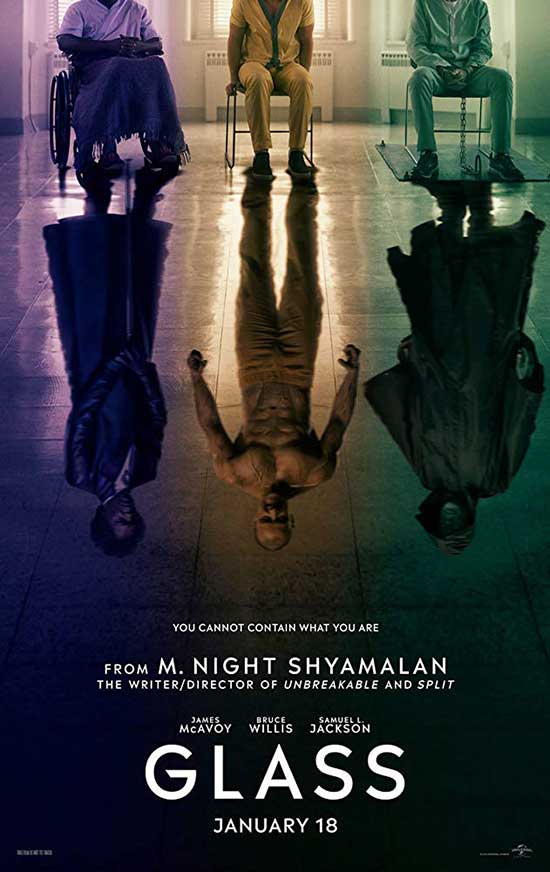 19 years in the making, seems like a unexpected time span that many noted directors shouldn’t have to wait (in order to fulfill a trilogy). In the case of renowned director M. Night Shyamalan, it is a fact and interestingly so a plot point to the actual 3rd film of this series (deemed the Unbreakable film series).

In review of this magnificent piece, I will profess from the get go that I not only thoroughly enjoyed it by consider it easily among one of 2019’s greatest movie success stories so far. For those who are reading this for review, I’ll offer this advice. Don’t dig into the spoilers of reviews until you have had time to either watch or re-watch the first 2 in the series. Those of course being the films: Unbreakable (2000) and Split (2016).

For me, my experience was perfect. I had not seen the movie Split until about a week ago (knowing that it made more sense to learn about James McAvoy’s character before heading out to see Glass). This provided a great connection point with such a short time span in between the 2. I was a fan of “Unbreakable”, but like other movies that seem to get lost in time, had eluded me up until now. In retrospect, the 3 films flow perfectly from one into the next making this easily, this year’s much awaited bluray set to anticipate.

Having seen the trailer to “Glass“, I was as up to speed as anyone that Shyamalan was connecting the previous 2 films into a combined 3rd offering. Though, seeing McAvoy hopping around like a tiger was not a character point I was yet familiar with. In short, make sure to see “Split” before heading to the theatres as his character and supporting characters are essential to much of this movie.

Ok, let’s get a bit into the summary of this film. “Glass” is not your normal super hero movie. It is no DC or Marvel comics type of film, but rather offering something more darker and unique to the genre. You might call this the ultimate non-super-hero-super-hero film. The idea of comic books, heroes, and villains is ramped up to a large degree in “Glass” and first introduced in “Unbreakable”.

We now find ourselves 19 years later in the movie timeline. This actual real time line aligns perfect with the age of our actors, characters, and storyline. We were first introduced to Bruce Willis as David Dunn who became an unexpecting vigilante-by-night hero figure. Thus ending “Unbreakable” on the reveal that Samuel L. Jackson who played Elijah Price, an avid comic book enthusiasts, was in fact a villain in disguise calling himself Mr. Glass. 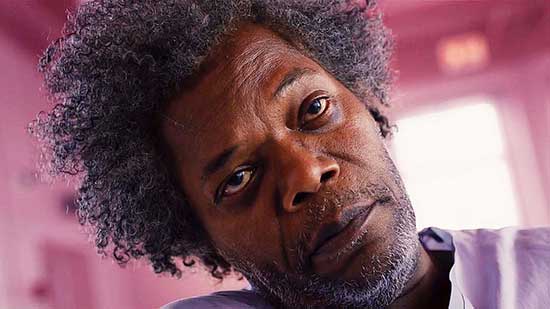 David was the sole survivor of a train wreck that was later learned to be orchestrated by Mr. Glass. David also learned that he had unique abilities that include super human strength, and an ability to touch a person and identify their sins or crimes. Mr.bGlass who first befriends Dunn suffers from a unique disorder called “osteogenesis imperfecta“, that affects his bones making them fragile like glass. Despite this handicap Glass is also a engineering genius who plotted and executed several major accidents. His mind while brilliant, was also twisted and deranged prompting him to take a villain role in life in search of the perfect opposite who might be persuaded to oppose him. Glass also takes on a 3rd identity in which he calls himself “the mastermind”.

What makes this series unique is that each film is designed to push the narrative into what Glass calls an origin story. This idea being based on the comic book genre itself that also often introduces characters as new issues emerge.

Like the comics, Glass’s obsession desires nothing more than to see some form of this fiction become a reality in his world. The discovery of others with unique abilities is where the 3rd film brings all into focus. James McAvoy who was first introduced in the movie “Split” is a troubled individual who shares his mind between 24 personalities. Each of them unique and uniquely skilled between the identities. Each fights for screen time in what they refer to in the film as “the light”. Though Split is not only a major nod to James McAvoy’s acting abilities but a clever film that switches between these persona’s often in lightning speed. The ultimate persona (and the reason for the movie “Split”) is the most dominating of all of them called “The Beast”. As “The Beast”, James McAvoy is transformed into a hulking figure that is able to archive special abilities only reserved for animals. He also appears to gain a increase in agility, strength, and a penchant for killing that deems those who he attacks as not being pure. 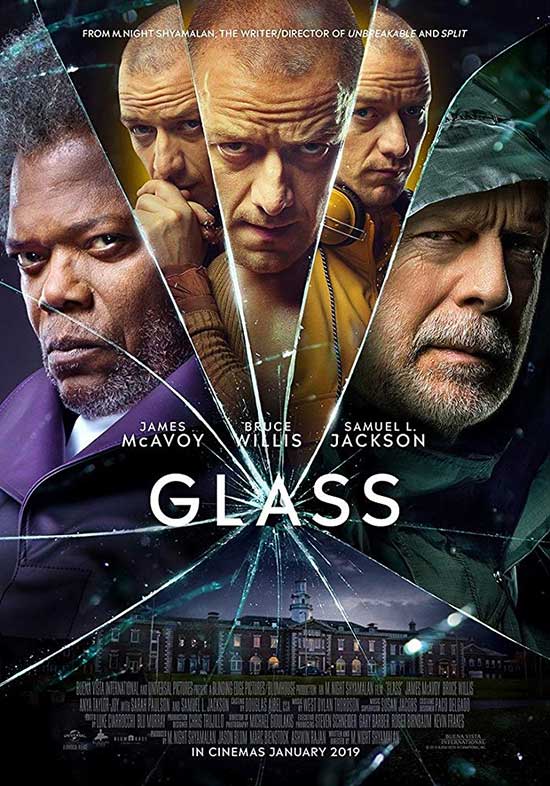 I don’t need to paint the entire picture here, for as mentioned a required viewing of all 3 makes for a wonderful experience in itself.

Coming into the 3rd in this series, M. Night Shyamalan is finally able to answer questions and wrap things up with the emergence of the film “Glass”. “Glass” 19 years later centers itself on the idea that these super humans didn’t not go unnoticed gaining the attention of Dr. Ellie Staple (Sarah Paulson), the head doctor of the mental institution. This timeline also occurs 3 years from the “Split” film aligning itself to a real-time plot line.

Staple is hard pressed to collect and study these unique individuals. As Dunn and Kevin Wendell Crumb (also calling his personalities collectively “The Horde”) are apprehended after a one on one encounter, they are soon joined with Elijah who has been institutionalized for his past crimes. Dunn now older has been hitting the streets fighting crime with his now grown-up son (Spencer Treat Clark) Joseph Dunn, who directs him from their workplace office.

The culmination of this movie’s characters coming together begins to unveil the ultimate plot in place, the ultimate showdown as Glass refers to it as. The film “Glass” takes full advantage of McAvoy’s acting talents and character to highlight him as the most dynamic of the bunch (but also appears to give purpose to the build up of these 3 films). 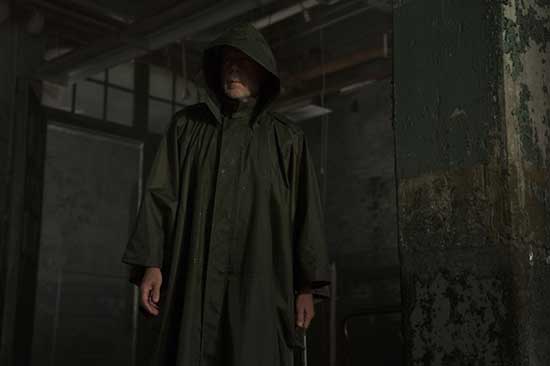 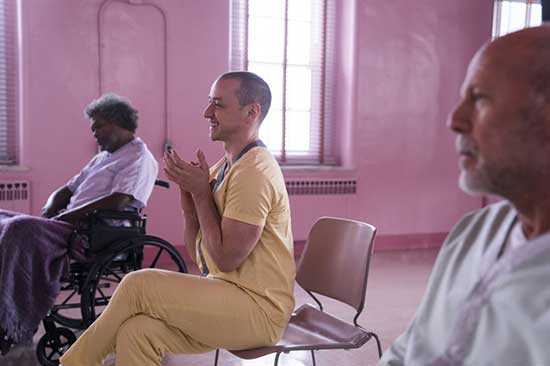 What results is a fantastic and moving exploration of acting chops, character development and piece of fiction that approaches the comic book genre in a whole new way. Placed firmly into a dramatic action film, the movie also explores aspects of science fiction and horror. Though never quite laying foundation in any of those, it just proves that original pieces of cinema can still be achieved without drolling out rounds of remakes.

Director M. Night Shyamalan regains his status as a director and writer of masterful execution and delivery. None the less, we also get the great acting talents of Bruce Willis and Samuel L. Jackson reuniting to revisit their original characters once more. The 3 of them combined with Sarah Paulson’s acting talents make for a visual and explosive screen performance that just makes movie watching a pleasure for all.

In retrospect, what makes this film and the others so compelling is that as an audience we always feel tied to reality rather than the more fictional universe of Marvel and such. So when our characters do things extraordinary, it still feels special rather than expected. 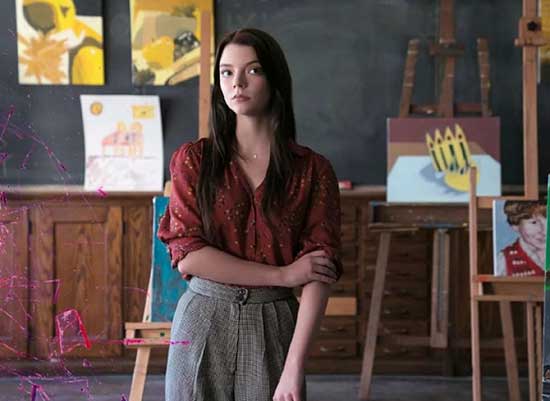 As mentioned before, each of the movies alone usually run over 2 hours making the trilogy an easy 6 plus hours of viewing combined. I couldn’t think of any better way to spend the time on a storyline that is a literally a perfect union of films. At present, 2019 completes the story while still leaving some questions for viewers to ponder. I wont spoil the finale here, but will say that the dialog is designed to create an universe bringing things full circle while offering a few new surprise.

On that note, I say run….rather than shuffle over into your local movie venue and dig into “Glass” with full enthusiasm knowing that it is a work worth seeing. I know I will be awaiting the trilogy itself to hit home theatre viewing where I can take the journey from the start once again.

Uniquely masterful, “Glass” is a movie that exceeds expectations.