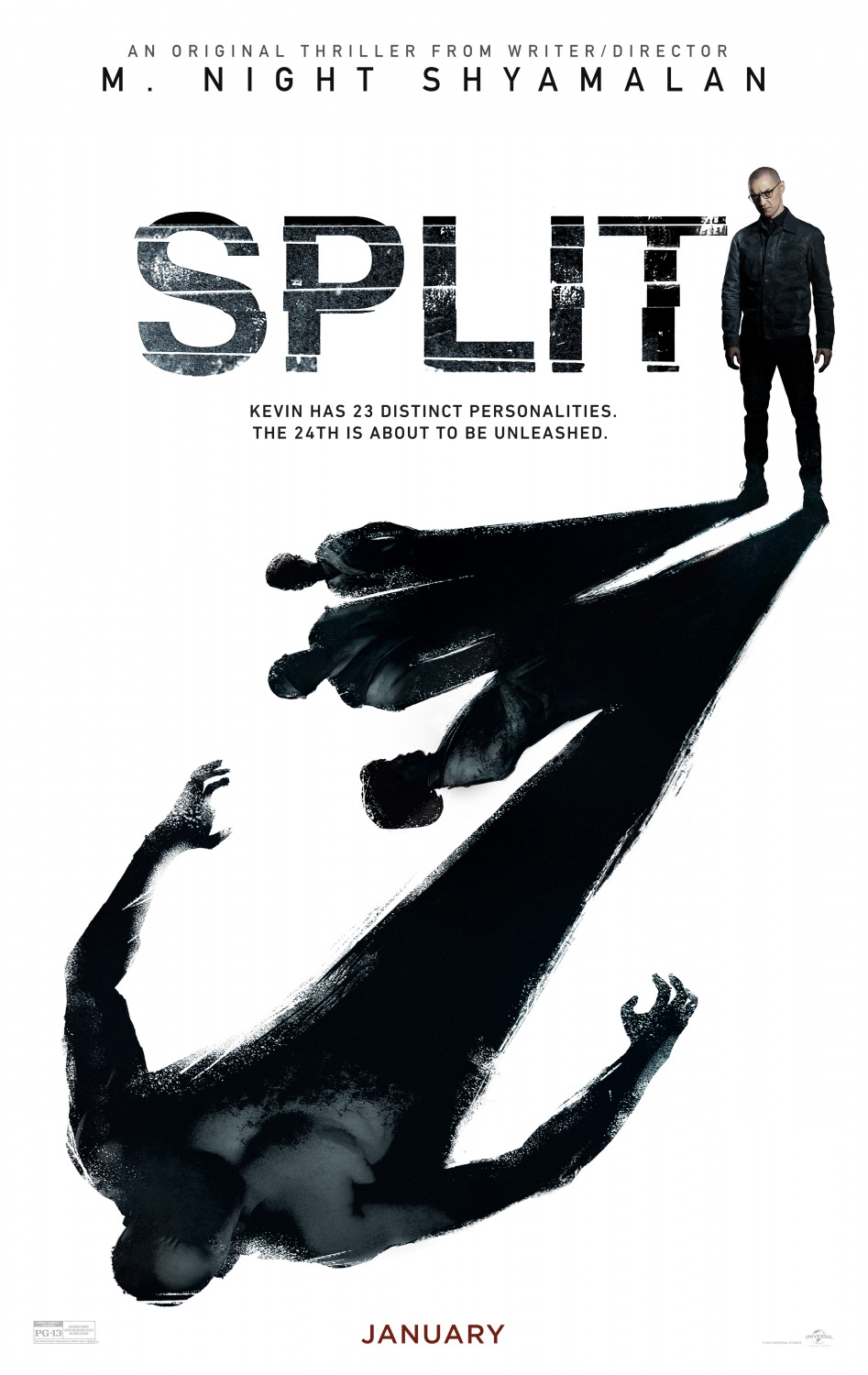 After three girls are kidnapped by a man with 24 distinct personalities they must find some of the different personalities that can help them while running away and staying alive from the others.

It’s pretty hard to overstate how hot M. Night Shyamalan was after the success of his third film, The Sixth Sense (1999). A lot of people think that it was his first film, but he directed two small films prior (Praying With Anger in 1992 and Wide Awake in 1998). But the surprise success of The Sixth Sense catapulted him into the upper echelon of Hollywood directors. He got even hotter with his next two films, Unbreakable (2000), and Signs (2002). It seemed that he could do absolutely no wrong, and film fans the world over waited anxiously for his next film. That turned out to be The Village (2004), which was successful, but not as big of a hit as his previous films. He followed that up with Lady In The Water (2006) which was a commercial/critical disappointment. His downward slide continued with films like The Happening (2008), The Last Airbender (2010), and After Earth (2013). It seemed like the world had had its fill of the patented Shyamalan twist ending, and his films seemed to be bereft of any true creativity. But he made something of a comeback in 2015 with The Visit, which found some success. And now he’s back with Split, which benefits greatly from a tour de force performance by James McAvoy. But is it a true return to form for Mr. Shyamalan, or is it merely a stop on the road to respectability for him? 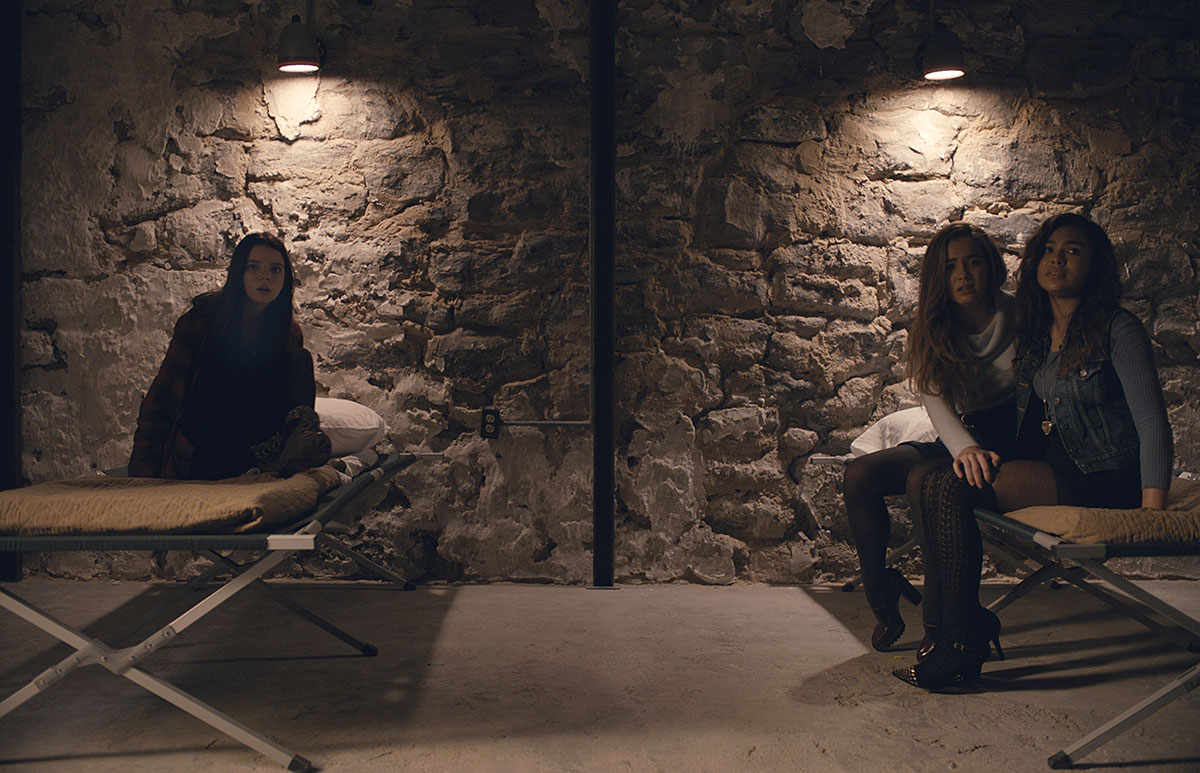 McAvoy plays Kevin Wendell Crumb, and, thanks to the film’s trailer, you probably already know that Kevin suffers from a seriously bad case of DID (Dissociative Identity Disorder). In less clinical terms, he has 23 different people living inside of him. One of them, Dennis, kidnaps teens Casey (Anya Taylor-Joy), Claire (Haley Lu Richardson), and Marcia (Jessica Sula) from a parking lot, and takes them to a dungeon that he’s created. None of the girls know why they were chosen, but some of Kevin’s personalities mention feeding the girls to the 24th personality called “The Beast“. While Claire and Marcia frantically try to figure out a way to escape, Casey tries to look at the situation logically. Kevin appears to them in a few different personalities, including a woman (Patricia), and a nine year old boy (Hedwig). Casey figures out that the girls need to find the one personality that can be reasoned with in order to escape, but there are 23 different ones to speak with, and none of the girls know how much time they have left. One thing is for sure, they know they have to get out before The Beast makes his appearance. 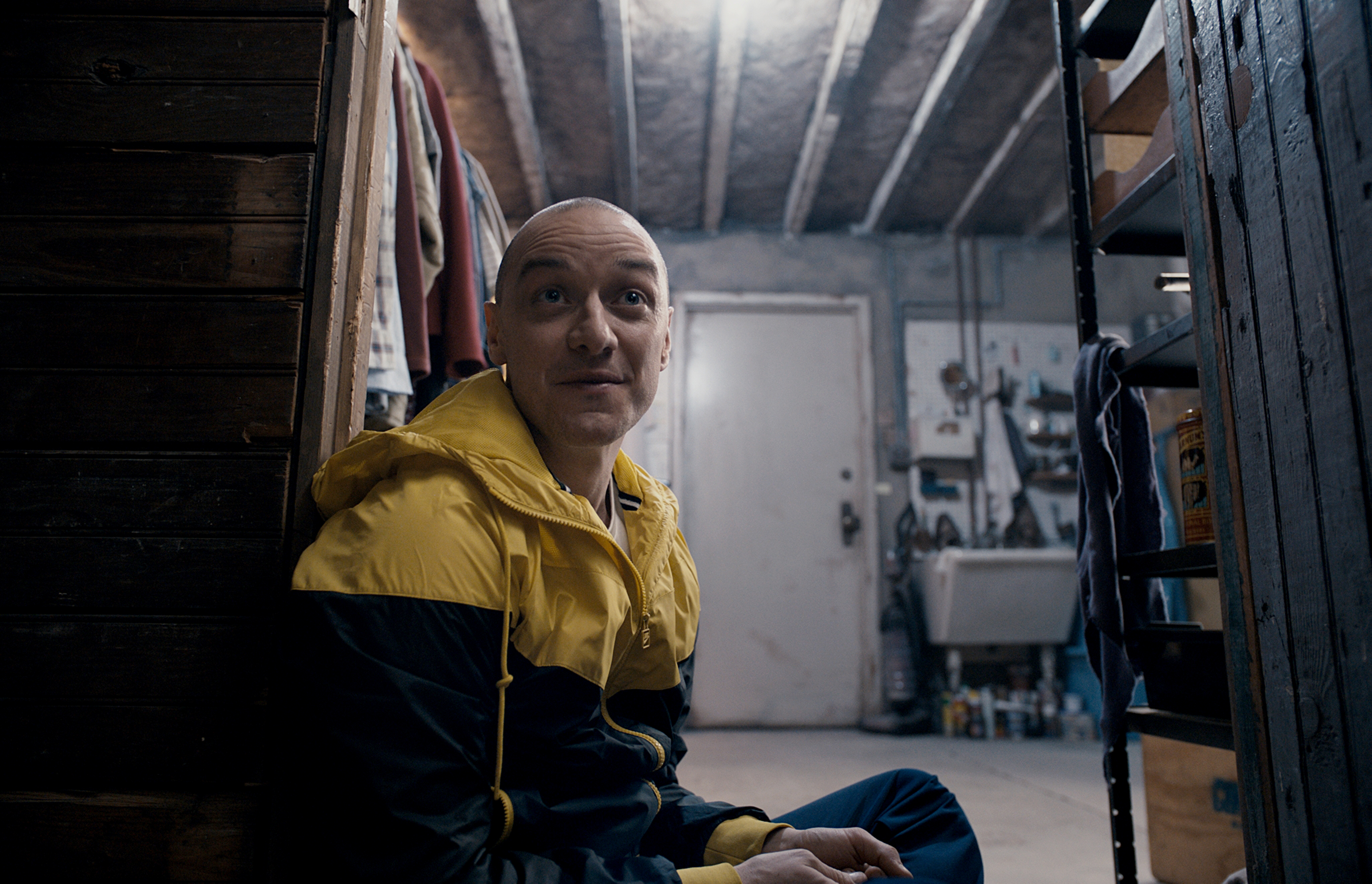 Split isn’t a horror film, or at least it isn’t one in the conventional sense. While the situation presented is indeed horrific, Shyamalan (Who also scripted) isn’t looking to terrify his audience here. What he’s looking to do is keep his audience at the end of their seats in suspense for the finale. And for awhile, that’s exactly what he achieves, Split is taut and tense for most of its running time. But the suspense begins to wane halfway through the film, as if Shyamalan suddenly realized that he’s focused on McAvoy too much, so he breaks away from him, and features the other actors. But they’re not half as interesting or charismatic as McAvoy is, and the film nearly grinds to a halt for awhile. Casey’s flashbacks to a childhood incident is important to the finale, but they slowed the film down for me. And scenes featuring Betty Buckley as Crumb’s psychoanalyst don’t do anything to propel the film forward at all (At least the ones without McAvoy in them). 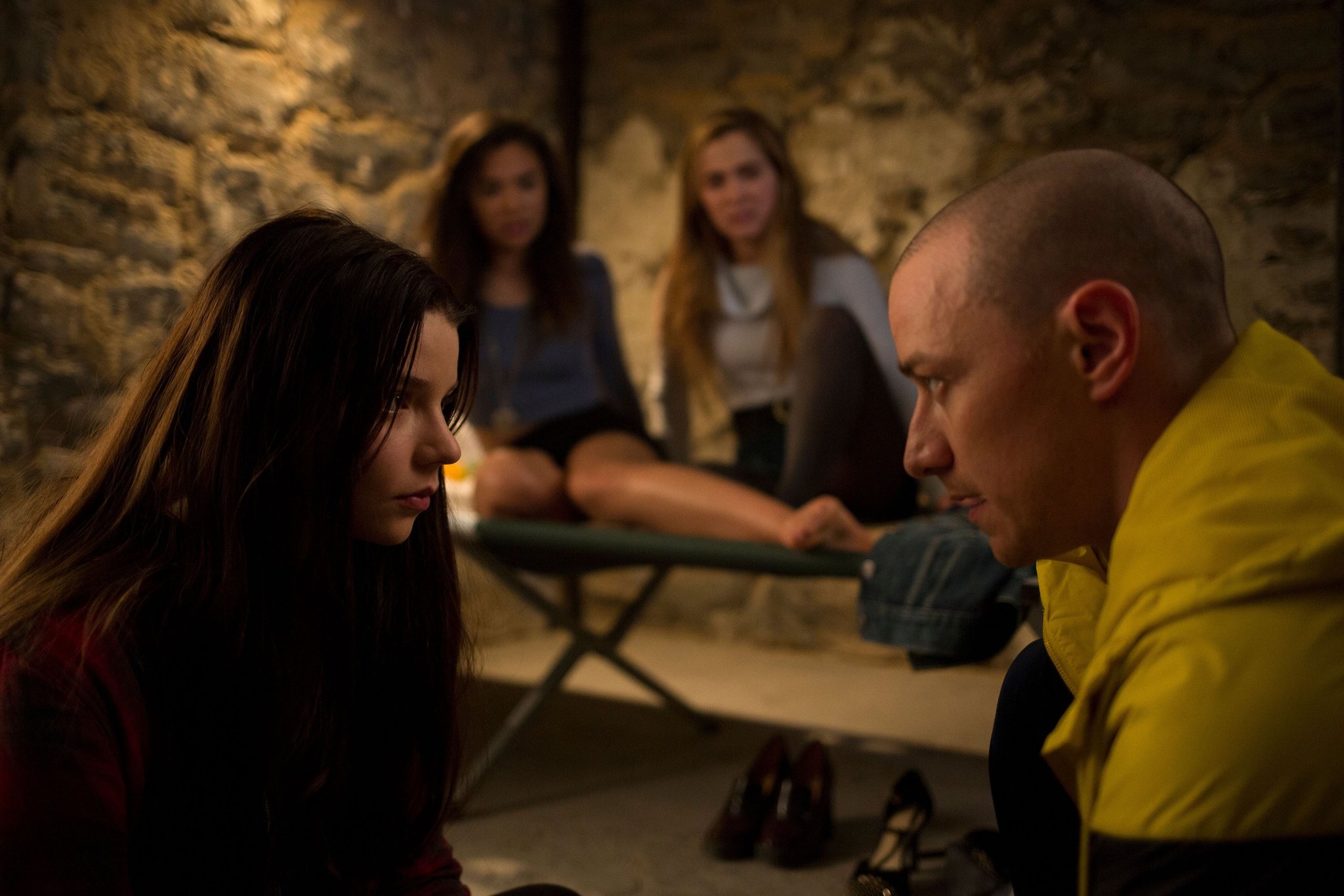 Luckily for Shyamalan, he has McAvoy to fall back on. His performance here might be construed as “Silly” or “Over the top” by some, but I firmly believe that had this film been released late last year, he’d be in play for an Oscar nomination. McAvoy is probably better known to most of you as Professor X in the last few X-Men films, but that role never really allowed him to stretch his creativity the way he stretches it here in Split. His take on having 23 different personalities is one for the ages. None of his personalities share any personality traits whatsoever, they’re all different beings, and McAvoy does an incredible job of allowing each one of those personalities their own space. They’re all unique and distinct. Towards the end of the film, when The Beast finally makes his appearance, McAvoy does something to alter his face that I’ve never seen before. The best way I can describe it is that, for a few scant seconds, his face looks like something akin to a really angry Cheshire Cat. That might not sound very unique to you only because you haven’t seen it yet, but trust me, it’s definitely unnerving, and about as frightening as anything I’ve seen in a horror film as of late. 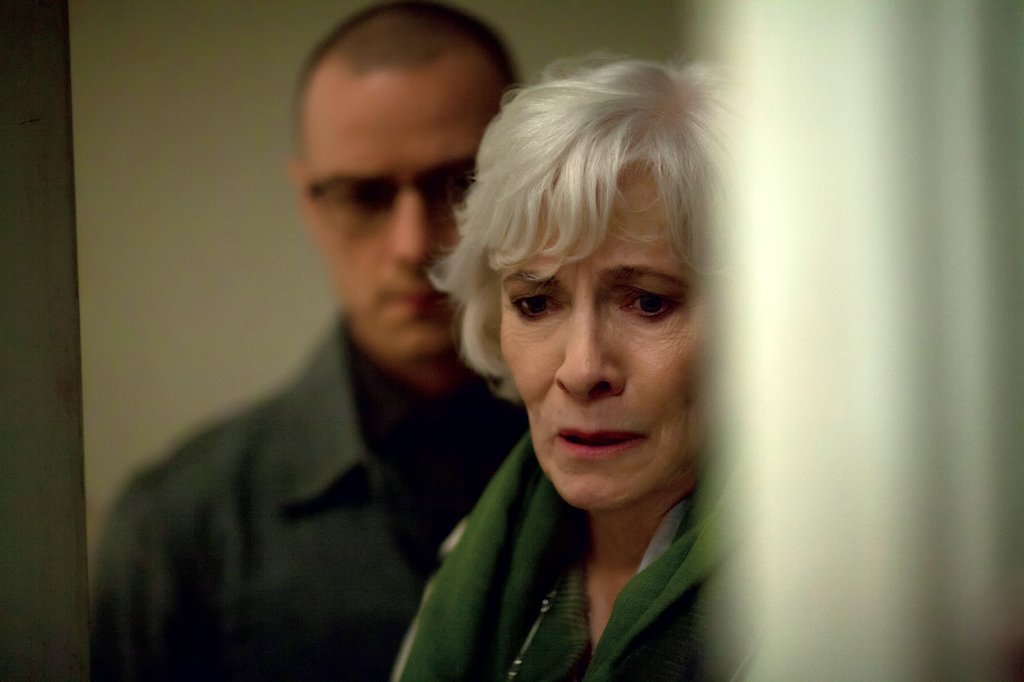 Taylor-Joy is the other standout here. Her vaguely off kilter features give any character she plays a sense of mystery, and as we learn more about her backstory, Casey becomes someone the audience becomes genuinely interested in. The other two teens trapped with her are pretty much the standard girls in peril, and don’t seem to be there to do much more than scream, cry and meet a sad end. They’re like the red shirts in any classic Star Trek episode, you know that they aren’t gonna make it to the end of this film (Although they do come close). Buckley is known as more of a stage actor, but she’s a fine film actress as well. While her scenes don’t amount to much in the end, she gives every scene she’s in a bit of class. But Split is essentially the McAvoy/Taylor-Joy show.

As to Shyamalan’s patented twist endings, I don’t think Split really has one. There’s more of a reveal than a twist here, and if you pay attention, you’ll see it coming a from million miles away. But there is a bit of a post credit stinger that really made me smile, and it turns Split from a fairly decent suspense flick into something completely different which I won’t reveal here (But I thought it was way cool). Sadly, it implies a film that we’ll probably never see. But just the thought of it made me giggle with delight. The film runs a bit on the long side as well, making it drag in the middle section, but it’s never boring – just a tad slow at times. 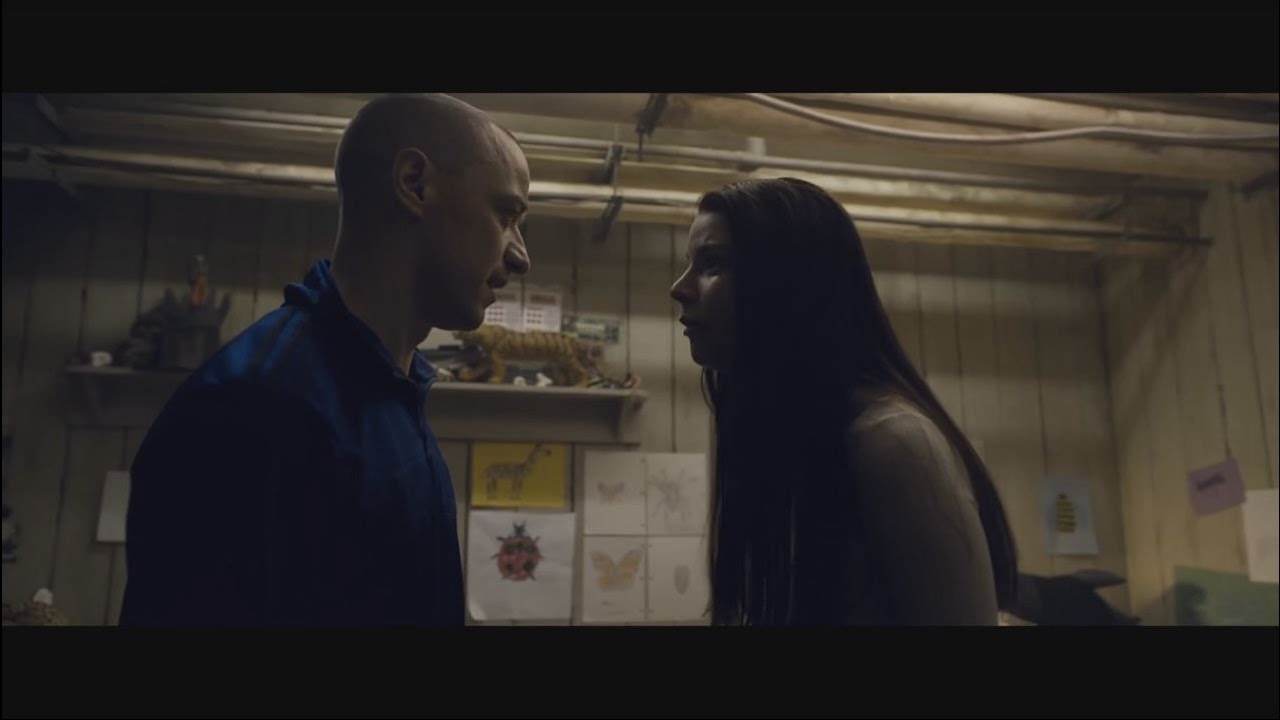 So the big question is, after the success of The Visit, Is Split a return to form for Mr. Shyamalan? I think it’s a step in the right direction for sure as it has some truly thrilling bits in it, and one of the best performances I’ve seen in awhile from any actor. But the pacing is off, and some of the characters seem to be there for show only (& they don’t show much). There’s little to no gore to speak of here, but if you pay attention you’ll get a bit of the red stuff towards the finale. And it does have that WTF post credits scene that’ll knock you for a loop if you’re familiar with Shyamalan’s films. Personally, I don’t think he’s quite back up to snuff just yet, but he’s certainly moving in the right direction.