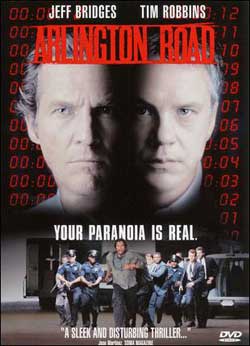 A college professor teaching a course on terrorists in America grows increasingly paranoid with whom the neighbors really are just down the street.

“Your Paranoia Is Real”

Arlington Road boasts some hypnotic cinematography right from the opening sequences. Extreme close ups and sound effects contribute to a pulse hammering suspense and gripping ground work. Droplets of blood resonate onto the sneakers of young Brady Lang played by Mason Gamble. Clearly the boy is distraught and disheveled as he wanders the sleepy streets of the ordinarily quite, suburb neighborhood of any town, USA. 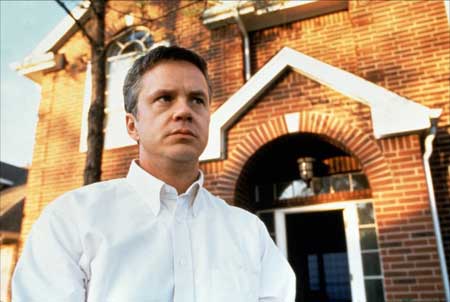 The acting is superb, top notch caliber of a dream cast ensemble consisting of Robbins, Bridges, Davis and Cusack. Plot and character development is dramatically enhanced fixating the audience on what may unfold next. Raw emotion is depicted from the facial expressions and torment of one Michael Faraday (Jeff Bridges). His sorrow runs deep from the murder of his ex-wife and FBI agent in a steak out gone horribly awry. Her death comes at a high cost courtesy of the US government and his sense of trust doesn’t come easily. 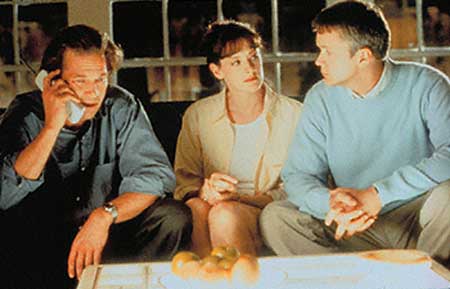 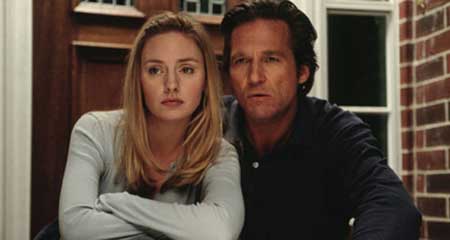 The use of terrorism as a central theme hits close to home for many a viewer. The 2012 audience in consideration of Al Queida, the 911 attacks, so on and so forth makes this film resonate long after watching. In all likelihood this picture is even more effective in our time frame than its original release in 1999. All sense of believability is suspended tremendously thinking that perhaps this plot could very well transpire in just about any neighborhood in our era.

There are some inconsistencies in the plot delivery. Such as the spots of blood on Brady’s shoes and pants change considerably from one scene to the next. A car crash involving a street lamp indicates significant damage to the head light only to unveil a mere scratch in the front exterior in the very next scene. The same red Ford Contour is initially a ’97-’98 model, changes to a ’94-’96 model and then back to its original ’97-’98 model in the following sequence. Michael Faraday is seen driving over the same part of a bridge twice when in pursuit of a delivery van. They’re for the most part little inconsistencies that will only be picked up with a keen cinematic eye. Yet on the other hand these among several other follies tarnish the overall presentation of a production seemingly of other wise high budget status.

The conclusion arrives with such a twist it will render even the most cynical of critics shuddering in anticipated terror. 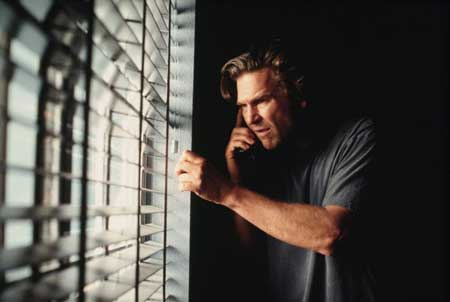 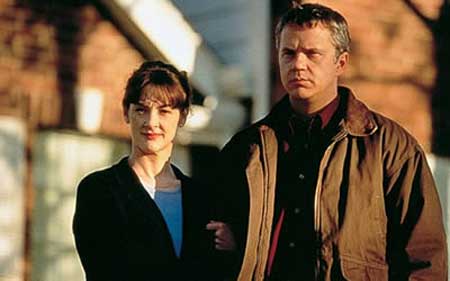 Arlington Road was nominated for the Saturn Award through the Academy of Science Fiction, Fantasy and Horror in 2000 for Best Action/Adventure/Thriller Film, best supporting actress Joan Cusack and Best Writer Ehren Kruger. Mark Pellington was also nominated for best director/Grand Prix award at the Paris Film Festival in 1999.

You may have recognized Pellington’s work from the Mothman Prophecies and less notably in music video for such bands as Pearl Jam, Alice in Chains and U2.

Perhaps not necessarily for everyone but for fans of terrorist thrillers a must see.

-Three and a half of five tombstones