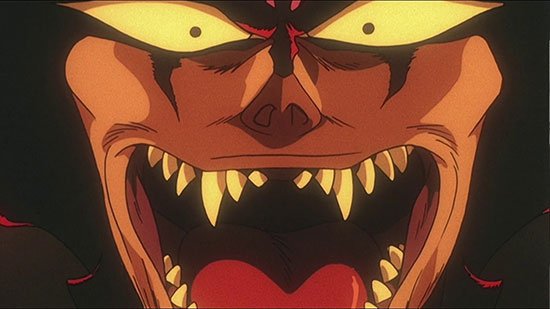 I have very specific tastes when it comes to anime. I’m more in “the Sailor Moon camp,” where sometimes heavy subject matter is flanked with pretty costumes and big sparkly eyes–I am very much a girly girl in that regard. The flipside of this is what I call “the Akira camp,” where generally realistic humans and settings are surrounded by dark political undercurrents and occasionally horrifying visuals. (Then you get something like Elfen Lied, which is a bit of both, and sort of screws up my whole algorithm.) When I do watch anime, I’ll go for magical girls almost every time…unless there is a tantalizing horror element that I just cannot resist. 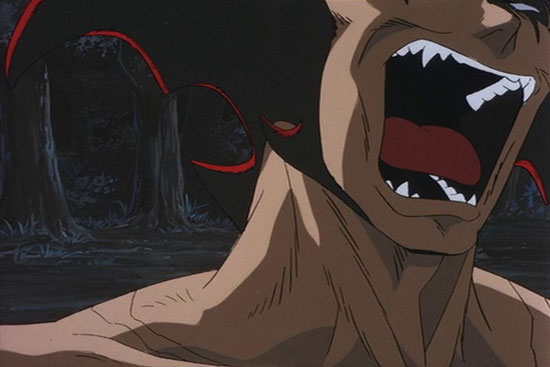 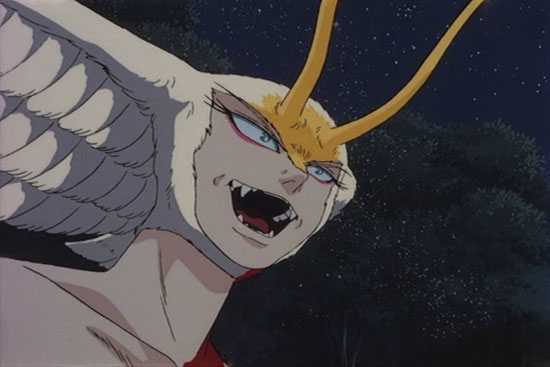 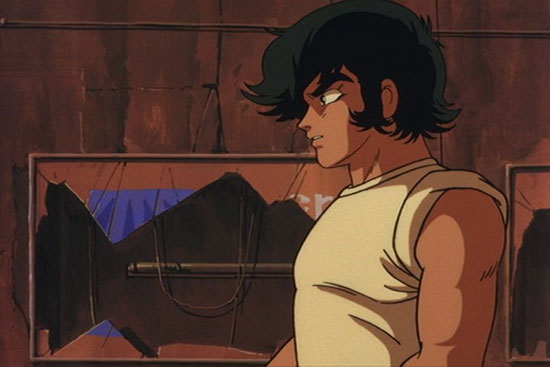 If you’ve browsed deep enough into the black dream hole that is Netflix Instant, you’ll inevitably stumble upon Devilman Crybaby, an anime purporting itself to be a Netflix Original. Should you venture to watch the first episode, you’ll find that it’s a doozy. What starts off as a seemingly sweet and normal anime takes a hard left turn into acid-washed nightmare fuel as demons start popping out of bartenders’ tits, and our mild-mannered protagonist takes on an alternate personality as a possessed hellraiser. The anime is quite interesting and the animation is fluidly spectacular, but Devilman Crybaby only the most recent incarnation of a title originally published as a serial manga in 1972, with the much more intimidating moniker of, simply, Devilman.

Devilman: The Demon Bird is the OVA adapted from the second volume of the original manga. While it doesn’t necessarily ruin the experience to go in blind, it does help to know that this film is an incomplete piece of a much bigger story (if that wasn’t glaringly obvious from the jump). Character relationships and the rules of the universe are sort of taken for granted in this film, on the assumption that the audience is already familiar with the source material.

The most necessary information is that Akira is a mild-mannered young man living in a foster home, who one day (before the events of the film) fuses with a demon. The change takes effect on his personality and physicality, going from a skinny murmuring sweetheart to a chiseled edgelord overnight. The series goes on to follow his monster-of-the-week battles with other demons, with the help of his demonologist best friend, Ryou, and his foster sister/love interest, Miki. 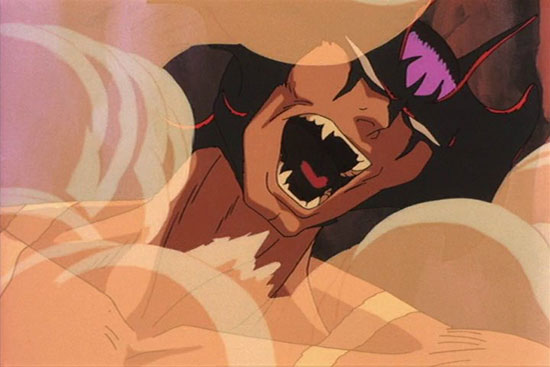 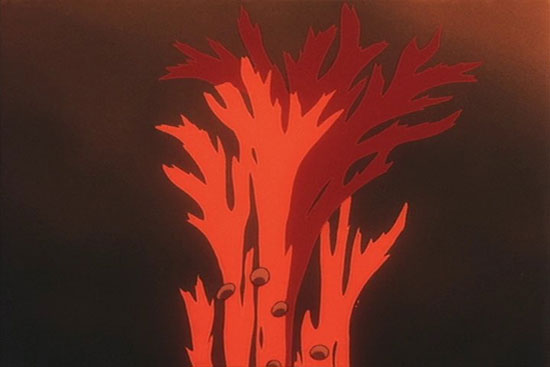 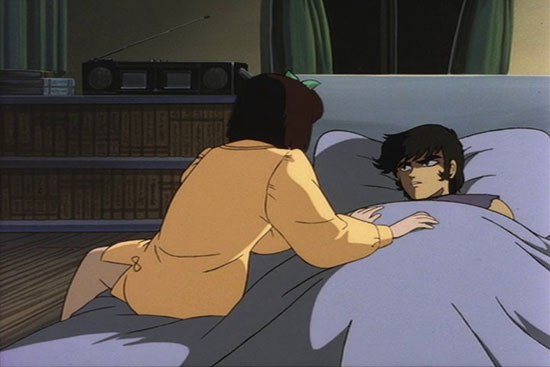 The Demon Bird ostensibly follows a female demon named Siren hunting down Akira to battle the demon residing in his soul, but the film is largely an episodic series of trials between Akira and various hellspawn before the showdown with the Big Bad. There are inherent hiccups in any film that has “missing pieces”—i.e., 30+ episodes of backstory—but for what it presents, Devilman is a smorgasbord of weird delights sprung to life with vivid and startling imagery.

From the get-go, it is apparent that Akira’s daily faceoffs with hellspawn isn’t the painless slash-and-burn it appears. His first opponent in the film is the demon Jimen, a nightmarish snapping turtle sporting a shell made of still-living human faces, one of which happens to be Akira’s mother. Every hit causes pain to the “ghosts in the shell” and the fight becomes a struggle for Akira to finish, until his mother shows him (through psychic visions, natch) her brutal demise in order for him to gain the resolve to destroy the turtle. The battle ends with Devilman cracking open the shell like an oyster and sending demon guts floating off into the sea, a truly spectacular shot that is the definite highlight in a film bursting with fascinating visuals, all within the first ten minutes.

Our main villain is, of course, our most mysterious and compelling character, so naturally we see very little of her for the majority of the run time. Siren may look silly in her winged headpiece, feathery loincloth, and literally nothing else, but she is a force to be reckoned with. Her talon-tipped limbs are detachable and have a mind of their own, clawing at enemies even without a body to guide them. We discover she is the one summoning the monsters Akira has been fighting, out of a grudge against the human who stole her lover’s power away. Once Devilman and Siren finally meet and begin their climactic battle to the death, one is strongly reminded of a Batman/Catwoman dynamic. What I mean by that is that there is a palpable sexual tension between the two even in the heat of battle, cranked so hot that you expect them to start making out at any moment. Spoiler alert, they do not. 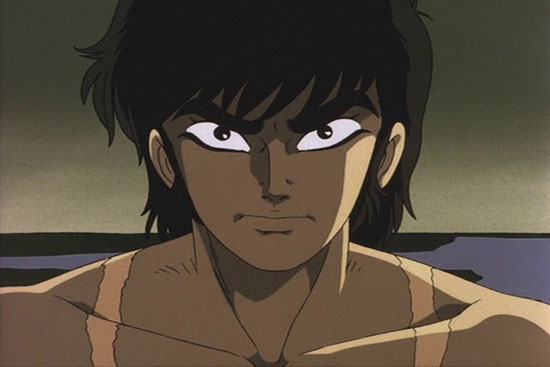 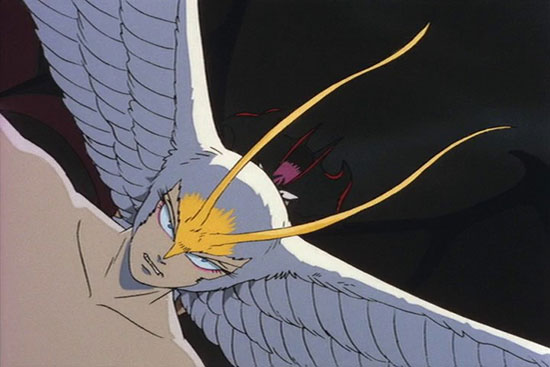 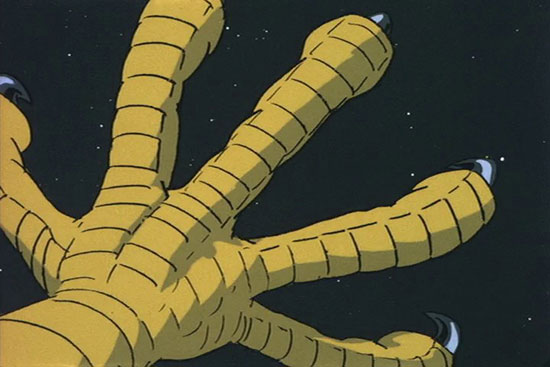 Again, the movie is only a piece of a larger story that spans a handful of mediums and reimaginings, so the ending isn’t exactly satisfying as a standalone film. The movie just sort of stops and vaguely intimates that the story will continue, so it performs more as an extra-long episode of the anime. But with a small arsenal of basic knowledge of the overarching series, or at least an awareness there is a series at all, Devilman is certainly enjoyable, if only for its trippy visuals of nightmarish beasts (and a fully nude female villain).