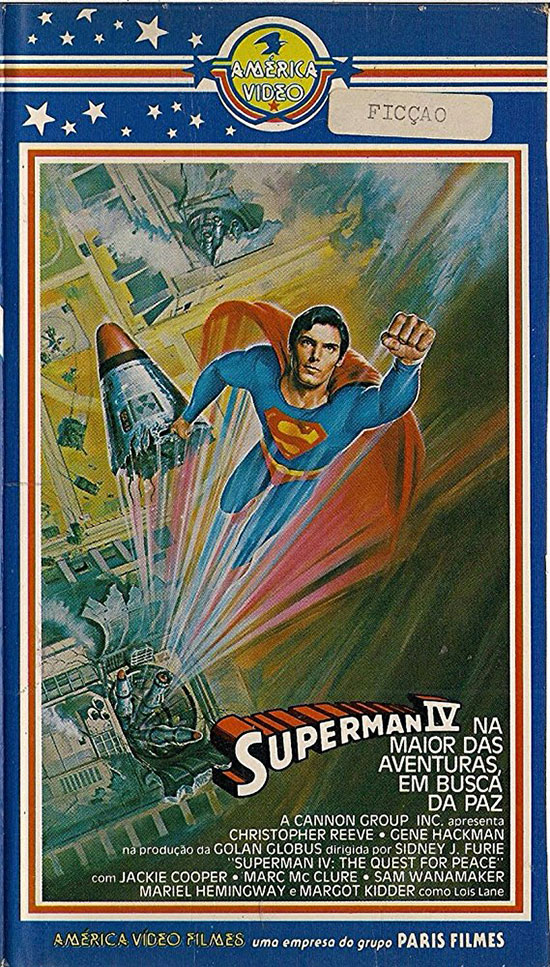 Today’s journey into bad movie land is the much-maligned Superman IV: The Quest for Peace, though if the director had his way, it would have had the subtitle The Quest for a Budget by the time they wrapped. The film centers on Superman making the decision to confiscate the world’s nuclear arms to prevent us from nuking ourselves. Lex Luthor, with the assistance of his nephew Lenny, escapes from jail and gets in touch with some black marketeers who were making money off the nuclear arms race.

Superman’s absconding with the world’s nukes is hurting their pockets, so they’re all too anxious to work with Lex Luthor when he comes up with a plan to destroy the last son of Krypton. Using a strand of Superman’s hair that he steals from a museum, Lex creates a superhuman solar-powered killing machine called Nuclear Man. Soon Superman’s life is put in jeopardy as when he’s forced to fight this new menace to stop Lex Luthor’s latest plan.

There’s an interesting backstory that explains some of the movie’s faults.. After Superman 3 failed to wow audiences and critics alike, Canon films managed to get the Superman film rights. However, after going to some lengths to get them, the producers failed to give director Sidney J. Furie the budget this flick needed. I’ve also heard that they kept cutting the budget after filming began. This forced Furie to cut a lot of corners, especially with the special effects. In a movie centering on two god-like superbeings pounding the ever living crap out of each other using their incredible powers, this led to disastrous results. It also could explain the plot holes, which there are quite a few.

To give you an example of how piss-poor the effects can be, you can sometimes see the wires holding actors up when their characters are supposed to be flying. The shots where they’re using blue screen is so poorly done that it’s obvious when the actors are just being transposed in front of a background. Whenever any Superman uses his heat ray vision or Nuclear Man crackles with energy, the effect looks like a poorly animated cartoon.

The next issue the film has is Nuclear Man himself. He looks too ridiculous to take seriously. From his yellow spandex suit to his mullet, he looks like a reject from a cut-rate pro-wrestling federation.. The fact that actor Mark Pillow has the talent of a tree stump doesn’t help either. He just grunts his lines and grimaces like he’s constipated for most of his scenes. The fact that he was given so little dialogue is a blessing since it reduces the effort he has to put into acting, which is not his strength. Neither is emoting or moving like he doesn’t have a stick shoved up his behind. 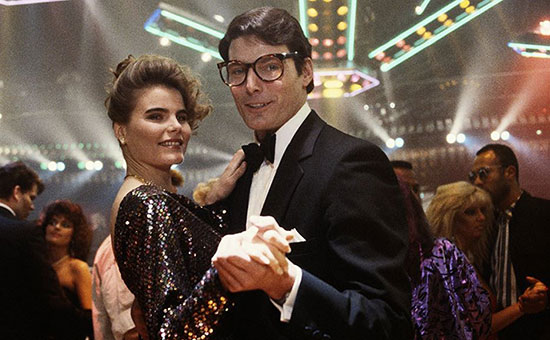 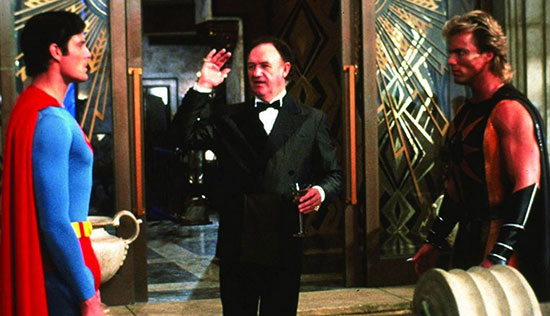 On another note, the Lenny Luthor character is annoying. Jon Cryer does the best he can, but his characters is just obnoxious. He dresses like the ‘80s threw up on him, his whacky antics are just annoying, and he manages to kill most scenes he’s in.. Whenever he’s on screen, you’ll find yourself either rolling your eyes or sneering.

The sad thing is that the makings of a good movie are here, which makes Superman IV frustrating. They were obviously trying to make a message about the dangers of nuclear weaponry, which was rather a bold choice for a Superman to touch on such a big topic. The handling of the anti-nuke storyline seemed a hamfisted at times, and the fact that the world governments don’t seem to be particularly bothered when Superman starts stealing their nukes and hurling them into the sun is beyond unrealistic. It would have been more interesting to have the storyline see the different governments of the world start labeling Superman as a criminal despite the fact that a most of the regular people are happy to not have to worry about dying in a nuclear war. It’s sadly wasted potential.

One of the positives, to my surprise, was a subplot that throws an interesting wrinkle into the Clark-Lois-Superman love triangle with the introduction Mariel Hemingway as Lacy Warfield. Lois only had eyes for Superman, so she never paid that much attention to Clark and remains blissfully oblivious to the fact that they’re one and the same. Lacy, on the other hand, could care less about Superman. She sees Clark Kent as the decent person he is and likes him for him. His clumsiness and nerdy behavior she seems to find endearing and earnestly begins to try to start a romance with him. As she pursues him, Lacy finds herself inspired to be a better person because of him. Clark seems to begin to genuinely like her as well. It was an interesting interaction that would have been interesting to see explored more in future movies if this movie hadn’t killed the franchise. 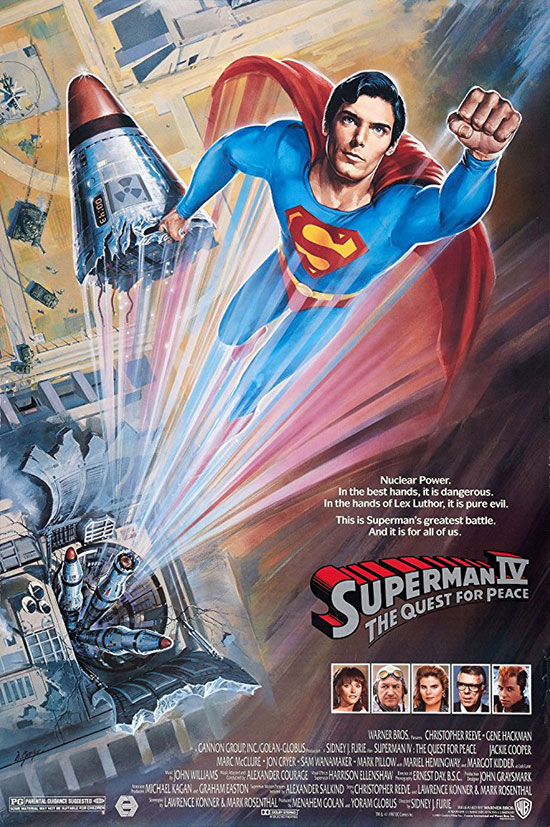 Most of the cast do what they can with what they have. However, both Gene Hackman as Lex Luthor and Christopher Reeve as Clark/Superman are the real stars here, and they still give one hundred percent to their performances. Hackman is as fun, charismatic, and entertaining as he’s always been in the role. Reeves once again proves why his portrayal of Superman is still the best there’s ever been. They have great chemistry together, and watching them banter back and forth is an absolute joy. 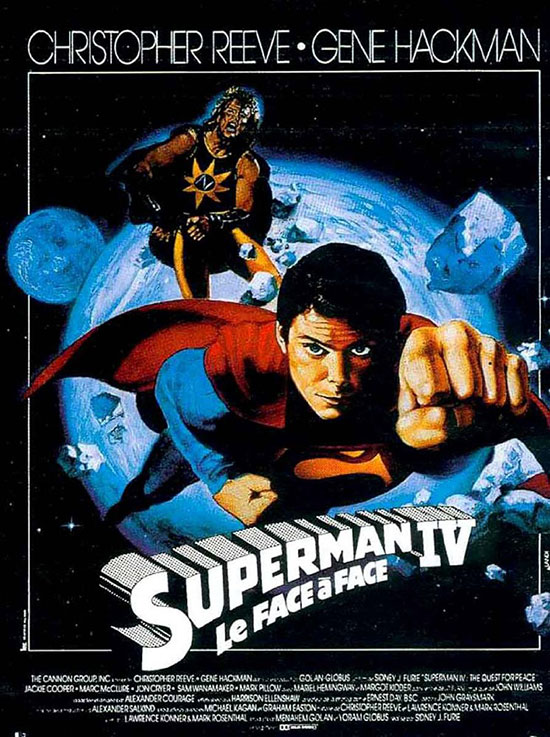 It’s sad that while there’s some good to be found, the bad far outweighs it. This is a movie that is hamstrung by bad effects, dumb villains, and wasted potential. It’s even more depressing to think that this was the last time we got to see Christopher Reeve’s iconic portrayal of Superman on screen. It seemed like he was born to play the Man of Steel, and it would have been nice if he could have gone out on a high note.