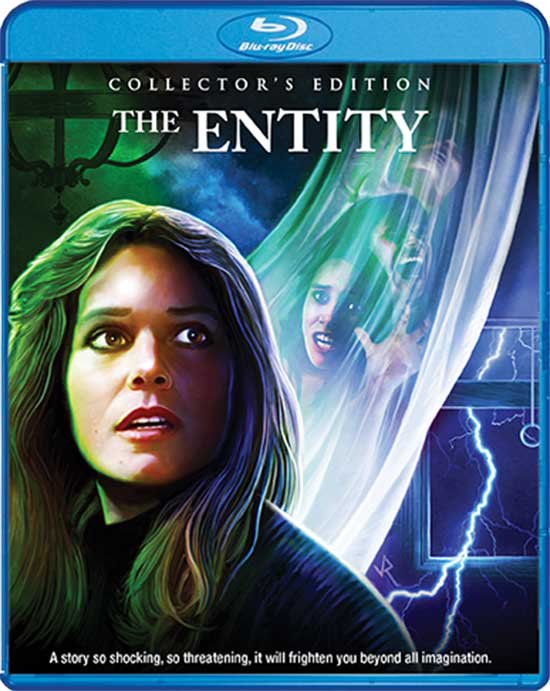 “Carla Moran awakens one night to find herself being beaten and raped by an unseen presence. Terrified of what’s happening to her, and shunned by friends and family who think she’s lost her mind, she seeks help from parapsychologists. The researchers soon discover that evil spiritual force has been drawn to Carla and is responsible for the violent attacks. The question now, however, is how do they stop it? Based on a supposedly true story.”

Frank De Felitta established his career as a writer during the fifties, churning out fascinating one-off scripts for anthology television series such as Tales Of Tomorrow, Suspense and Danger. He vanished off the radar during the sixties, no doubt to hone his writing skills in preparation for the release of his first novel in the seventies, Audrey Rose, concerning the supposedly true story of the reincarnation of a young girl. Such subjects were ripe for exploitation back then and it was a case of ‘Right Place Right Time’. The novel proved so popular a successful film version of Audrey Rose (1977) was produced by master director Robert Wise starring Marsha Mason and Anthony Hopkins, and former screenwriter De Felitta had re-invented himself as an author of truth-is-stranger-than-fiction novels. 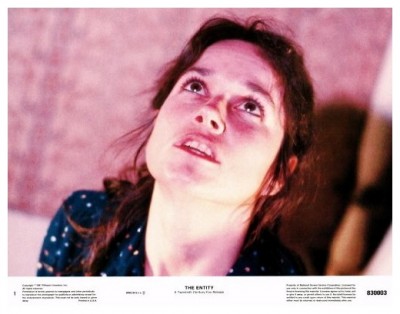 Another of his books was filmed as The Entity (1982) which tells the supposedly true story of Carla Moran (Barbara Hershey), a single mother living with her three children, who is sexually attacked by an invisible assailant. The attacks continue over several evenings, and the psychiatrist Sneiderman (Ron Silver) from whom she seeks help believes she is conjuring up the attacks from her own repressed sexuality and that her bruises are simply hysterical stigmata. He tries to convince her that her problems are psychological, the result of having hang-ups in regards to men and sex, because she was sexually abused as a child. At different times both her son and Sneiderman witness these attacks, and a group of ghost-busting parapsychologists attempts to trap the entity by spraying it with liquid helium, but it escapes. 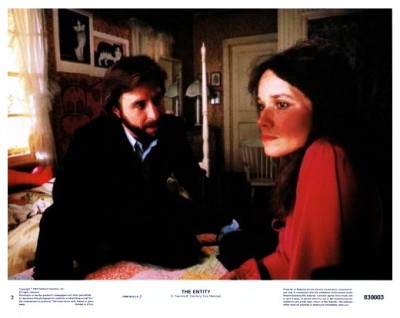 The rape scenes are truly scary (it’s one of Martin Scorsese‘s favourite horror films) though the brutality may turn-off some viewers, and the relationship between Carla and Sneiderman, who simultaneously tries to get her to believe there is something wrong with her and to take him as her lover, is quite perceptive. It shows how males immediately try to give females the weaker inadequate position in relationships. At first it seems that Sneiderman will be the film’s hero despite playing mind games with Carla (because he doesn’t mean to be a bad guy) but fortunately, in a very good scene, Carla permanently rejects him. 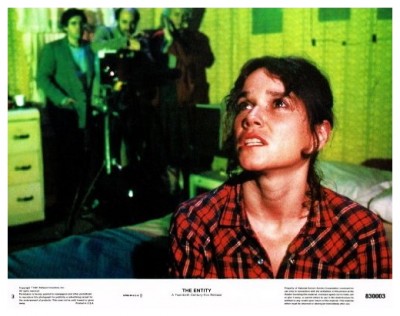 The film is interesting that it bluntly confronts the idea that is suggested by so many horror films but seldom spelled out – that the attack of the ‘Beast’ is willed by its victims, that the horrible ‘Shape’ is an external manifestation of internal torments. But having produced the idea, it then proceeds to weigh the scales against the psychiatrist who believes in it, so that the film becomes no more than an intelligently made creature-feature about the violation of a lonely but courageous woman. Barbara Hershey’s performance, however, does contrive to suggest that in some small back room of the mind, her defilement may be welcomed and, to this degree, the film is somewhat disturbing. 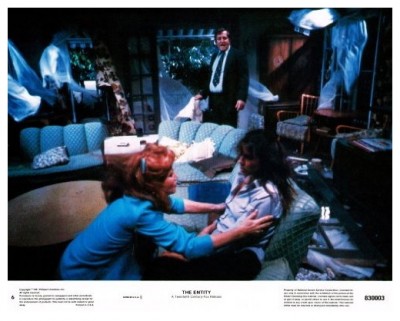 Director Sidney J. Furie wisely shot the beautiful Barbara Hershey in close-up to build intensity and gave her free reign as an actress. The result is a truly good performance that deserved an Oscar nomination, but was largely ignored due to it being in a very flawed horror movie. The allegedly true events depicted in such films as Picnic At Hanging Rock (1975) and The Amityville Horror (1979) understandably aroused the skeptic in all of us but, believe it or not, the events depicted in The Entity remain one of the most startling cases of documented poltergeist activity. In fact the paranormal researchers assigned to the case (Kerry Gaynor and Barry Taff) even serve as technical advisors on the film, so that’s got to be some kind of seal of authenticity, right? 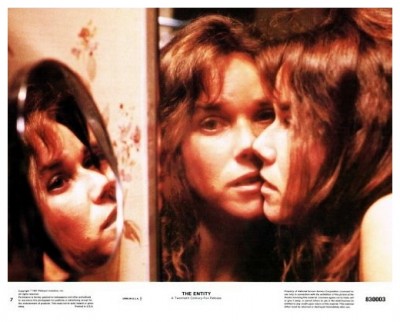 Although this ‘dramatisation’ purports to be an accurate record of the events as they occurred, that doesn’t mean it can’t also wallow in the sheer sensationalism of it all. With a pumping soundtrack by Charles Bernstein accompanying the entity’s gratuitous attacks, and some early prosthetics from Stan Winston depicting invisible fingers groping at Carla’s more tender bits, The Entity dispenses with all subtlety in favour of shock value. But when you’re dealing with facts, how far is too far? Technically proficient, visually impressive and frequently scary, The Entity remains a highly entertaining bit of widescreen eighties hokum that delivers some genuine jolts, an over-earnest performance from Barbara Hershey, and a premise that’s so outrageously unbelievable it must be true! 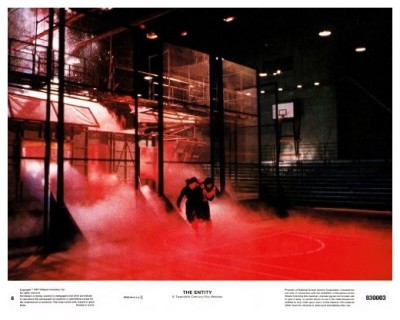 But seriously folks, as to the claims made by this and other films as documented truth, believe them if you will, but such claims are so much a tradition of yellow journalism that they should be treated with caution and, in any case, the film is in no sense deepened by this supposed truth. On the contrary, a rather sordid element of exploitation is added to a story that is already morally dubious in its treatment of repeated rape as a theme designed to entertain. Keep that thought in mind for the next seven days, and I’ll politely ask you to please join me next week to have your innocence violated beyond description while I force you to submit to the horrible horrors of…Horror News! Till then, toodles!

The Entity (1982) is now available on bluray per Shout Factory 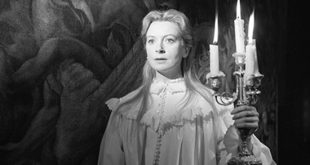 How Many Times Can They Turn the Screw? The 9 Most Accessible Versions of The World’s Most Famous Ghost Story