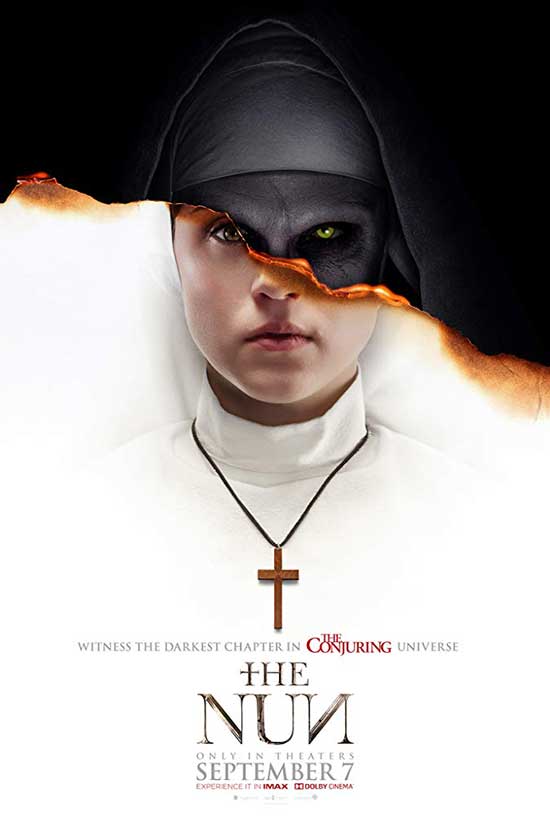 A priest with a haunted past and a novice on the threshold of her final vows are sent by the Vatican to investigate the death of a young nun in Romania and confront a malevolent force in the form of a demonic nun.

Coming out of the gate as the proclaimed scariest film of 2018, “The Nun” is indeed a frightful experience. This supernatural entry into “The Conjuring” universe is easily among its most frightful yet focusing on the single entity seen in Conjuring 2, aka The Nun.

Directed by Corin Hardy “The Nun” represents the 5th installment to come from “The Conjuring” franchise, an epic of mass proportions that seems to nail every release it touches focusing on a particular historical aspect or character from this brooding horror storyline. Under Warner Bros. Pictures, the film is reported to have been a financial box office success boasting over $228 million.

In review, this entry is a prequel to the Conjuring storyline setting its timeline back to Romania 1952. The story occurs prior to the first in the series, “The Conjuring” which presents a greater look into the origins of its more evil incarnations. Fans of the series are all too familiar with the haunting nun lady from the sequel “The Conjuring 2” of which has her crossing over from an equally scary painting. Those who remember Conjuring 2, will note that the film ends with the Nun being killed and condemned back to hell (The Nun actually being a demon named “Valak”). 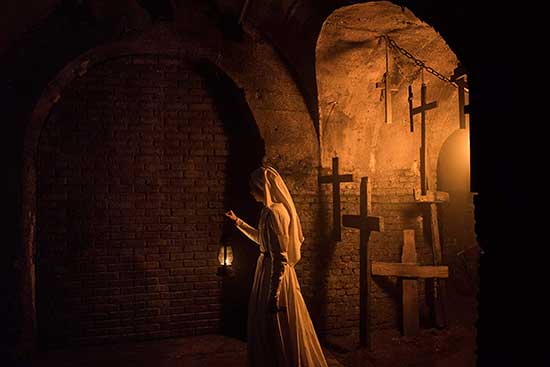 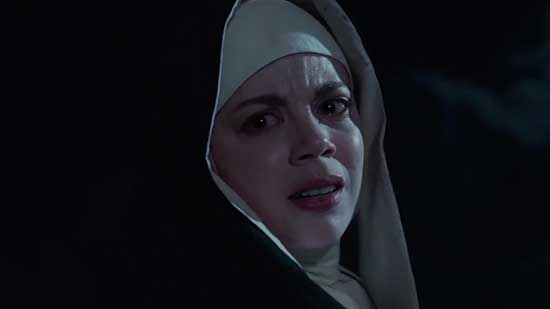 Now this bit of information should not be a particular spoiler for you since we are set back in history in this later release and the initial origins of the nun. In actuality it is the nun who acts the movie’s poster lady for this demon (which we learn is summoned from hell per a Duke obsessed with calling upon hell and raise a powerful demon entity). This raising of hell was still short lived as the Duke is attacked per a band of Christian knights in possession of a vile containing the Blood of Christ.

While all this is important to the origins of the franchise, we learn that the seal itself was broken per the bombings that occurred during WW2. The location, “The Abbey of St. Carta” (Cârta Monastery) has become the prime locale which appears to exist for the sole purpose of containing this age old evil. We are moved thru timelines that introduces us to the very beginnings of this tale leading up to 1952. The evil entity is diligently locked behind a closed door proclaiming in Latin, “God Ends Here“. 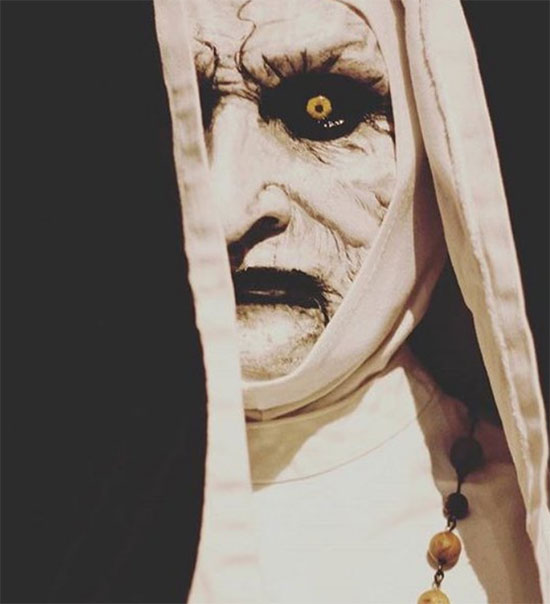 The whole first act is extremely creepy (to say the least) leading us thru a dark hallway littered with crosses. This hallway scenario is also presented pretty effectively thru out the premises. In addition, portions of the story center its prime jump scares upon an equally creepy graveyard (also littered with crosses) designed to keep the evil contained within the Abbey’s borders. The nun, once a former practicing nun herself, has become completely transformed and possessed by the demon Valak.

The resulting entity here lends itself to some pretty jarring posters and trailers that completely removes any pre-notions of what we “used” to think of nuns. The role of the nun is played by actress Bonnie Aarons, (who luckily in real life is far less creepy looking than her onscreen character). Aarons was in fact a pretty good choice for the role with her unique facial structure providing the much needed curves and narrow cheekbones for the character’s brooding presence. 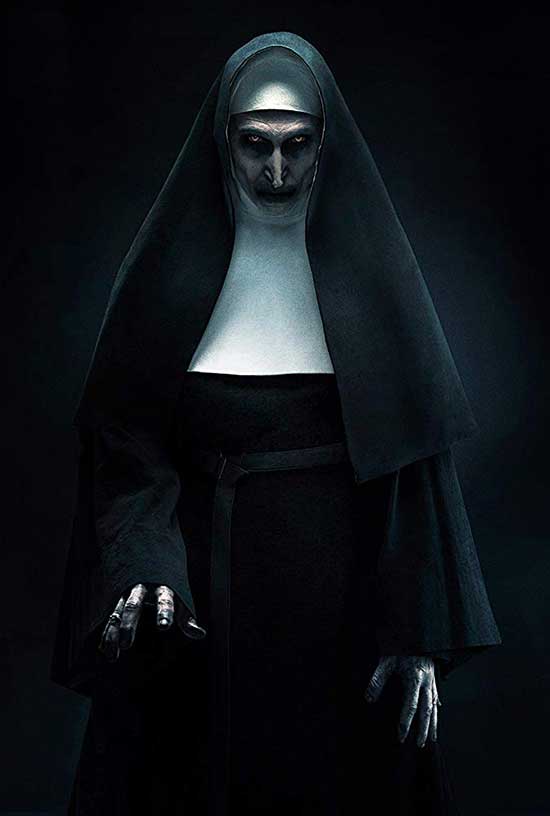 As the storyline goes, The Vatican has determined that they want Father Burke (Demián Bichir), a specialist in this field in the accompaniment of Sister Irene (Taissa Farmiga) to investigate the Monastery and report back on their findings. The two of them led by Maurice “Frenchie” Theriault (Jonas Bloquet) descend upon the locale to evaluate the situation. This begins an awfully creepy ride into a rush of hellish and nightmarish encounters.

Many will walk away from this film with haunting memories of this lady creeping in the background and floating down hallways. Just the effect of that alone is what will send shivers and visions of terror to film goers who thought Linda Blair was the only creepy gal on the block. The movie “The Nun” while not perfect, is still a great horror flick that manages to often hit nerves thru setting, situation, and darkness.

The 3rd act of this film, which leads to the final confrontation, is necessary to bring the character full circle (which we see much more from this demon). However, I will stick to the statement that the brilliance of this film is not its 3rd act, but rather its incredibly haunting build that often does more with far less. The simple gaze of those glaring eyes, a few upside crosses, and a shadowy figure in the distance is what really sells the experience here.

It would be my guess that somehow this character may be bound for more appearances (despite the fact that she has been seemingly killed twice in the Conjuring universe). However, that is still to be determined. 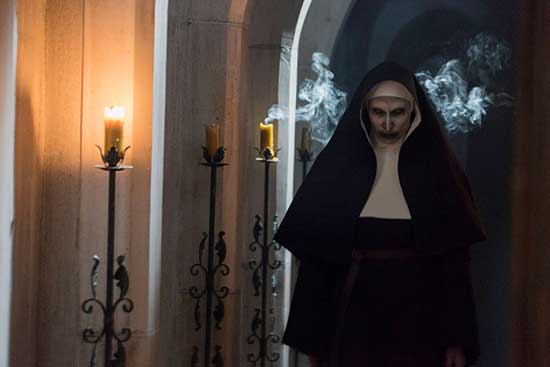 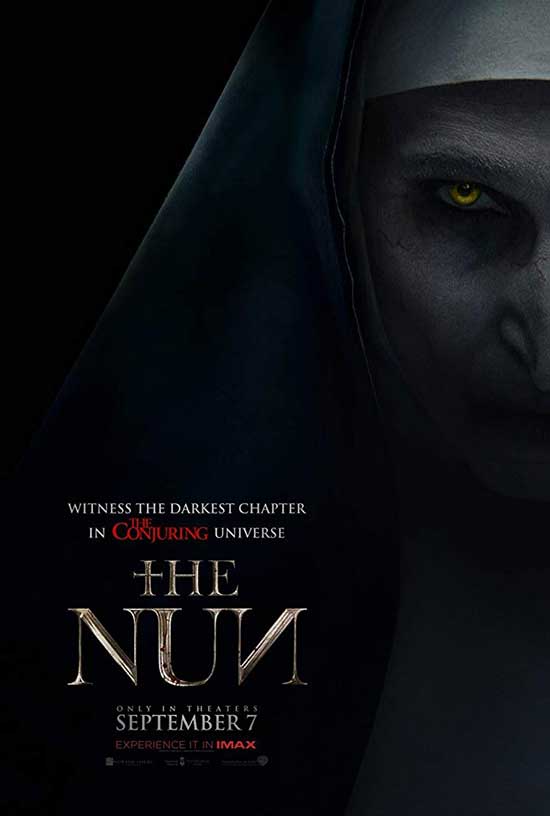 Note: The only thing better than a Nun bluray release would be a Conjuring box set down the road that collects the who lineage under one roof. Seeing that there is still talks of more pieces to this puzzle being promoted to fans, we might be waiting a bit for those additions.

If those are in doubt, then take the plunge and go see this one as it delivers far more than the sea of lesser releases over the last few years. It’s a great experience that deserves more than one viewing, The movie “The Nun” is a harrowing experience worthy of the genre’s attention.