The Bad Movie Bible: The Ultimate Modern Guide to Movies 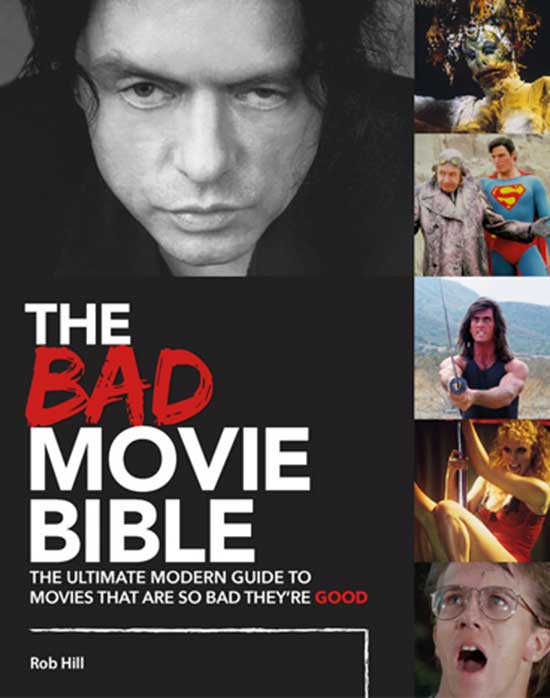 That Are so Bad They’re Good

Bad Movies have always fascinated me. Of course most viewers would choose a quality release over some mess of a concoction that someone decided to call a movie, however as the years have passed, and movies are cranked out, a few really bad ones stand up and take notice.

This idea is what drew me to this particular book release titled: “The Bad Movie Bible: The Ultimate Modern Guide to Movies That Are so Bad They’re Good ” by Rob Hill

Rob Hill has recognize these stunningly odd achievements and collected them into a nice tidy volume that will most undoubtedly provide hours of entertainment to friends and family looking for a few good laughs or points of cinematic confusion.

We have see our share of the greatest hits when it comes to bad filmmaking. So much, that they are quite often promoted as being SO bad that they manage to sell more copies sometimes than the ones created by serious filmmakers. It is that cult-like fascination, that ability we gain when having some new crappy film to speak about, that fuels our inner fan bases resulting in a film experience of interesting conversation. “Did you see…., oh man, can you believe it?”

Rob Hill collects some of the “best of the worst” for filmgoers who want to specifically seek out these poorly conceived movies. While this idea might be easily solved with grabbing a bunch of old 70’s and 80’s films, it is the unique qualities provided here that gives us that something extra to shake our heads over.

Case in point, repeat offenders: “The Room” and “Troll 2” have been mentioned so many times in books, web articles and printed publications that you would think the were created bad just to gain the marketing pull they have received. Some have gone onto private film festivals and fan gatherings over specific releases.

This book is a literal treasure trove for film lovers. But allow me elaborate on that statement. In reading thru Rob’s selections it occurred to me that no one person has the capacity to see every film created to then turn around and grade them for ‘bad movie’ inclusion. So this book will undoubtedly leave out selections that others have seen. My recollection is that 2 films “Laser Blast (1978)” and “Metalstorm: The Destruction of Jared-Syn (1983)” were of notable bad movie caliber for a book like this, however one might easily categorize several of Full Moon’s movies into bad film classification as well.

Rather, Rob has taken to a smattering of titles that were either well known for being bad or that were mentioned at some point more than once as the bad films to see (and then reviewed by Rob for inclusion) “Battlefield Earth” being one case in point title.

What I took away from this read was not only a well written overview of several titles worth seeing for their “crappy but good” quality, but a reference of many titles I’ve never seen or bothered to look up. This alone is worth the price of admission as I now have the ability to hand puck bad films and give them a gander.

Getting more specific, horror films like “the Corpse Grinders“, “Death bed: the Bed that Eats” and “Jason x” are just a few worth giving a gander for their oddly misplaced contribution to the genre. Science Fiction lovers will love the cheesiness of retro movies such as “Battle Beyond the Stars”, “Infra-man” and “Starcrash” (I actually remember paying $ for some of these to see them on the big screen…yikes!…yep it’s true I paid to see Infra-man!!) Though don’t stop there as the book is chock full of bad titles like the “Fantastic Four (1994)” that never saw the light of day, or the complete miss of franchise, “Batman & Robin”.

Better yet, the takeaway here is that their are several titles (many just have never seen) that provide their own version of entertainment for the creations that they are (I’m adding some to my Netflix que immediately after review………).

“The Bad Movie Bible” is a fun read that never comes across as pretentious (often found in many film overview books) Rob has great writing style and insight that will convince you he knows a thing or 2 about the films he picked out. The book is hardbound, contains color images, and is presented in an easy to read format complete with genre chapters. The book published under “Art of Publishing” is the perfect size and length to enjoy in several sittings.

When I finished pursuing this read, my first thought was if this and several other film books were sitting on a coffee table, this would be the one people pick up and discuss.