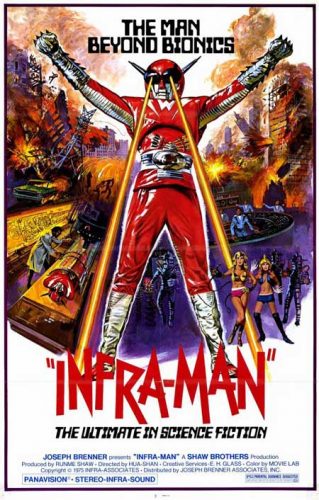 Princess Dragon Mom and her mutant army have arisen, and only Inframan can stop them!

Infra-Man debuted in 1975, though my recollection of this film stems sometime in the 80’s when it received a brief afternoon theatre run. I was all too exited to see this mix of martial arts and characters come to my local theatre, but now looking at it years later, I realize that “that” excitement was from a different perspective than my thoughts now. The film based itself around much of what we could till find on TV at the time. There was “UltraMan” and “Johnny Sokko and his Flying Robot“, that played during afternoons taking on a similar look, feel and execution. In fact, those shows proceeded this film, so its probably closer to say they influenced the production of “Infra-man”. This style of costumed characters whipping about and getting duped by the heroes was common fare.

In more basic terms “Infra-Man” was a super hero movie, that like all of these films, is trying to keep the world from destruction. Now in the before-mentioned films, the base was “giant” robots and monsters (aka Godzilla style), though in this film it is just a man who volunteered to get equipped with a scientific technology that gives him strength and protection from the elements. Wearing a robot-like costume, you could quickly make the comparison to the TV show “Ultra man” figure. At one point, “Infra-Man curiously rises to the occasion as a giant version of himself to do battle with one of the alien demons. This segment is the only one where giant monsters battle. 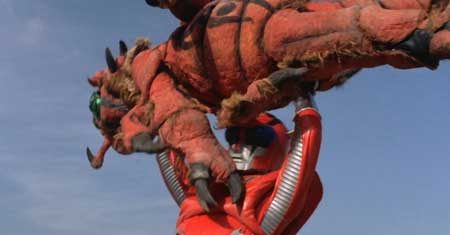 The film was produced by the “Shaw Brothers” and was noted as being the first China superhero movie. The fighting style is rooted in Kung-fu which from my perspective looks absurd at times when pitted against costumed creatures, The creature who were alien warriors under the leadership of “Demon Princess Elzebub” (an obvious play on the word Beelzebub) are equipped with different talents or fighting instruments. Like clockwork they are sent one after together to do battle on earth against the positioned defender “Science Headquarters”. This facility is run by Professor Liu Ying De which gets hammered up pretty hard until their resident hero is implemented as a retaliation effort.

Each character is sent in under order by the princess Elzebub who commands them to destroy “Infra-man”. Though the “infra-man” is much more skilled in combat and fashions an unbeatable weapon using what is called “jung-ra”. The Skeleton Ghosts act as her own personal army with demons arriving under the names of “Fire Dragon”, “Spider Monster”, “Mutant Drill”, “Long-Haired Monster”, “Plant Monster” and the finale “Iron Armor Monsters” who can shoot their heads and hands out like weapons. While the names are a bit silly, its not too hard for fans to recognize the early signs of the meat that influenced much of the modern Tokyo gore style films. The hard core element is of course missing, but the application of organic wielding creatures is pretty apparent here in a more “Marty Krofft” kind of way. On that note, I was making comparisons to a “Flash Gordon” style meets “Sid and Marty Krofft” set designs.

“Infra-Man” is nostalgic, but also is lacking in what fans look for in films today. I found myself nodding off occasionally in the reduncy of these old school Batman style battles. The martial arts stylings are still impressive enough that deserve mention, but those silly suits are hard to take seriously. One will also notice the occasional “wire” used to flip our heroes around that didn’t get edited out.

The film ends with a final battle at the lair of the what is called “Mount Devil”. The princess has kidnapped the professor and his daughter hoping to keep them around permanently to build her own version of “Infra-Man“. The film has been mentioned over the course of interviews as being an early influence for many, but for new viewers keep in mind that its an early Asian creation out of the 70’s.