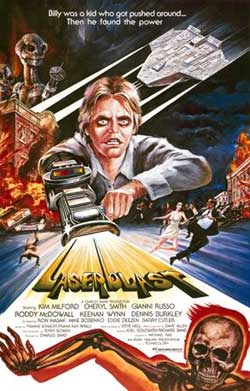 A teenager stumbles upon an alien weapon, which transform him into a grotesque killer.

Laserblast alluded me for many years. This sci-fi horror film of 1978 believe it or not was on the cusp of cutting edge. Or so I thought. I distinctly remember seeing the advert when it arrived thinking, this “might be” very cool cinema. Boy was I wrong.

“Laser Blast” had a some redeeming qualities in that it combined stop motion aliens into its live action. This technique was being utilized pretty heavy at the time in films like Sinbad. The aliens are pretty easy to recognize as they come across as turtle bodies with out the shells. In any case, “Laserblast” is pretty much a pointless film.

A frankenstein-green-faced boy stumbles about in the desert as an alien ship descends down upon him. 2 long-necked turtle creatures approach the boy who fashions a rather long 1 handed laser gun and take him out with a few zaps of their own. For some odd reason they climb back into the ship and leave the weapon behind. (whoops….damn forget the ray gun again) 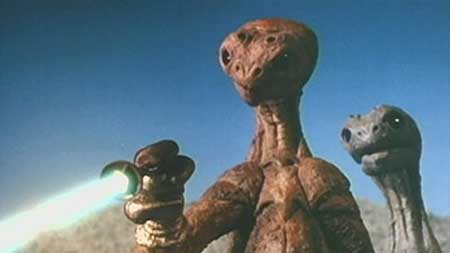 Moving on, we meet the seemingly always depressed Billy (Kim Milford) who really doesn’t have much more going on than driving around town shirtless and partying with a few friends. Even when we spends a few precious moment with his girlfriend Kathy (Cheryl Smith), he seems more content being alone in his pouting demeanor than really ever showing any enthusiasm for anything. The reviews of this film say that Billy is upset over those who have wronged him, but we never learn anything remotely familiar to make a connection about “what” or “who” that refers to. A few wise guy kids offer some joking remarks, but not enough to make a connection to the real conflict here. In one scene Billy takes on the 2 brats for one of the worst quick fight sequences I’ve seen. Regardless, we tag along for the ride to see where this is all leading. Unfortunately, much of it is a mess. 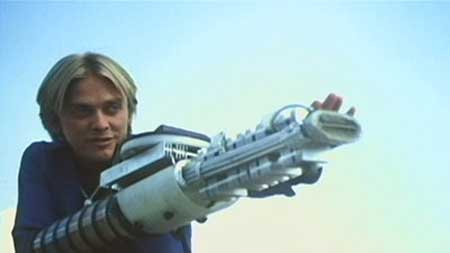 Billy finds a laser gun in the desert and proceeds to dance around like a dork waving it about. In fact, he appears to be his happiest (if for a moment) which still which doesn’t make much sense. The aliens monitor from above and speak in an extraterrestrial language that doesn’t offer any subtitles. So “if” they had a plan or purpose, I suppose you would have to speak turtle to really know what was said.

Billy grows attached to his elongated weapon and figures out how to fire the damn thing. The weapon itself is a puzzle as it seems to infect the operator turning him into a green faced sharp-teethed derelict with glassed-over eyes. I was thinking of the film “Mask” with Jim Carey, but “Laserblast” came much earlier and didn’t offer the same dynamics.

The possession of the weapon also embeds a weird metallic object in Billy’s chest…again no reason. Noted actor Roddy McDowall makes an appearance as the resident doctor who I’m guessing didn’t highlight this film on his resume list. As the turd of a story progresses, Billy goes on this rampage shooting everything in site. The back story has Government official Tony Craig (Gianni Russo) looking into things with the help of the local police. Though Craig and the green-faced Billy never confront each other leaving the story with plenty of holes. 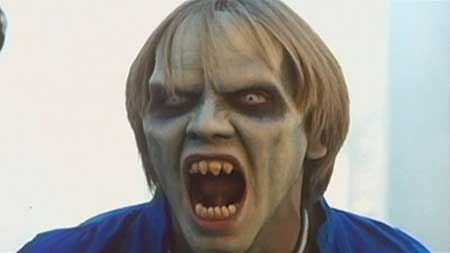 “LaserBlast” basically serves a small purpose in the anals of film history. That is…. to accommodate the B movie genre and give future generations something to laugh at. We are left scratching our heads at what forces green-lit this production.

Actress Cheryl Smith apparently went on to be a small cult hero in a handful of films. She was also reported to have been in an early version of the band “Runaways”. Her life ended too short as she developed a heroin drug addiction and died soon after. “Laserblast” was directed by one-time director Michael Rae (rightly so). “Laserblast” came shortly after big budget movies such as “Star Wars” and “Close Encounters of The 3rd Kind” which are mentioned a few times in the film itself. 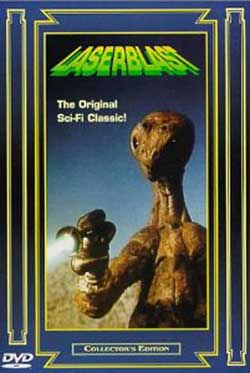 While “LaserBlast” failed to really make an impact in the sci fi genre it is still noted for its stop motion work that was developed by animator David W. Allen. The movie’s B quality aspects are overwhelming and thus providing a great example of a project that should have never been made. I think it offers a great Mystery Science Theater 3000 quality that could be used for comical entertainment value even though it is unintentional. 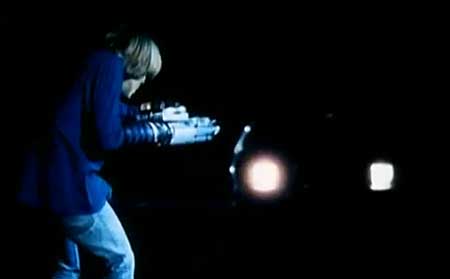