Every now and then you come across an odd movie or 2. Some films take all kinds of directions to fill the viewers time with abstract visions and fantastical scenery. “Death Bed: The Bed That Eats” is not that kind of movie. I was at the half way point in this one when I began to wonder why director George Barry really had a need to create this movie. It has plenty of 70’s trappings such as mediocre sound, bad wardrobe and hippy like attitudes, though it doesn’t seem to serve any real purpose beside being off the cuff and a simple product of B-grade film stylings. 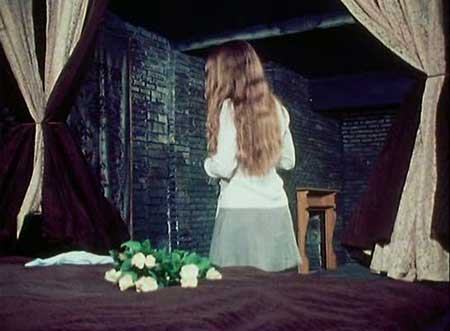 We are told the films narration thru the voice of its one its trapped souls who is captured behind a painting of a bed (for eternity). This soul is forced to watch as the bed eats and sleeps from what appears to only be just on the other side of a canvas.

A rather nice looking 4 post canopy bed sits within a mansion room unattended and with conscience. It appears to have a bit of supernatural abilities such as locking doors, moving its covers, placing the occasional lost soul in a limbo all its own…that kind of stuff. It seem to possess be a sort of limited telekinesis occasionally being able to enter into others dreams. This bed itself is a demon in disguise that must endure eternity snacking on the occasional passerby who dares to sleep within its covers. 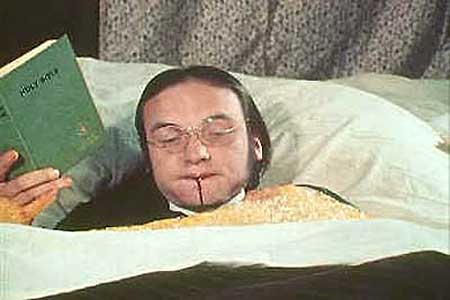 As each new victim finds their way to this isolated bed within the basement, it proceeds to swallow them whole as they sleep with a weird form of regurgitation liquid. We spend half the film watching items float into its supposed stomach while it consumes them and feeds. This seems to also be unlimited such as drinking wine, flowers, suitcases, chick and of course the sucker who decides to take a knap.

The budget of this film is obviously very limited using a few camera angles to demonstrate the beds hunger. As it eats, it boils up some kind of yellow foamy liquid that assists its objects to sink into its mullet while it absorbs them. 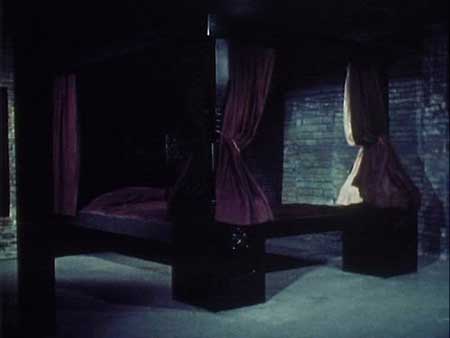 We are told that the mansion used to belong to a gangster who has long been absent. The bed originates from a demon who takes human form in effort to mate with a beautiful girl. When she died, the demon cries blood turning the bed into a form of hungry isolated monster.

We are taken to different segments where new bodies come in contact with this bed. Usually its for sex or just a relaxing nap. Of course all of them end up in its bed stomach liquid pool of ….well something or other. In essence, it gets to eat a few times. 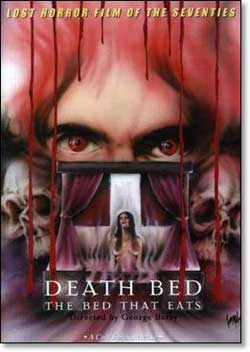 Filmed in Detroit, the movie was set almost entirely at the Gar Wood mansion on Keelson Island. The filming began in 1972 wrapping up 5 years later. The movie although simple and bizarre was meant to be regarded as an art film that sprinkled with bits of 1970s exploitation. I believe its just so unusual that it gives it charm and interest to viewers who want to experience it for themselves. In all, I didn’t find much here except for the before-mentioned reactions. The film was the sole contribution of writer director George Berry which doesn’t say much for his willingness to contribute making odd movies. In fact reports claim he doesn’t even remember the film…though it did gain a cult status following which says something for viewers who are curious enough to sit thru this one. It’s quite possible that filmmakers from that era were either really inventive or completely whacked. 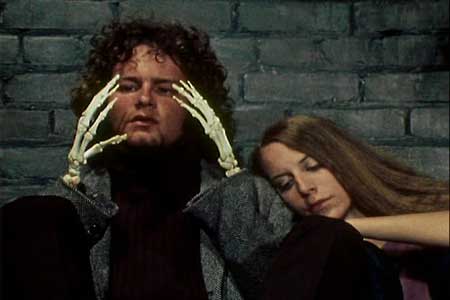 I found it curious but nothing more than the kind of film that you’d see lumped together on a budget 50-title film set. It will probably make alot of lists for being strange..which will ultimately build more curiosity than it’s probably worth. 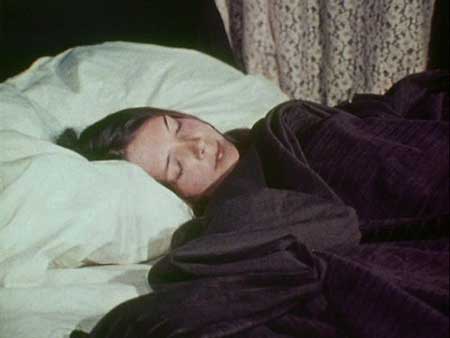 Death Bed: The Bed That Eats (1977) had circulated for years as bootleg copies and was later released 26 years later in year 2003. I’m not sure I can advise running out and grabbing a copy, but you may enjoy it for its simple ridiculousness.