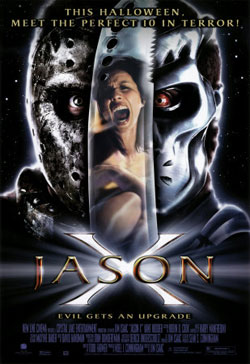 It’s 2455 A.D., and Earth is a contaminated planet that’s been abandoned for centuries. In the remains of a research facility, a visiting archaeology class discovers two frozen ancestors — a beautiful woman and a rotted corpse wearing a strange mask. When they transport the carcasses back to their space lab and the ice melts, Jason is revived … and ready to unleash a new kind of hell on the future.

You know sometimes a concept is just SO great movie makers assume that the concept alone will carry the movie, and they don’t need to put much, if any other effort into it. I have a VERY vivid memory of walking into a Blockbuster in 1997 with my bud Adam and coming across “Leprechaun 4: In Space”.

My heart skipped a beat.

“They put the Leprechaun is in SPACE???” I exclaimed “That’s %$%*@ BRILLIANT! How could this movie go wrong?? All you need is him going ‘I need me gold!! Let me have me gold or I’ll BLAST you with my RAY GUN! Have you noticed I’m IN SPACE??’ or some sh*t like that and BAM you’ve got a masterpiece!”

Well…unfortunately for me the makers of that movie clearly had the same misguided thinking, because the fun ended as soon as the movie started. My hopes were DASHED! It was just a few years before that, that my mind was EXPANDED by the site of the Leprechaun pogo sticking someone to death, and here I was falling asleep during what should have been the pies de resistance. Nothing good happened! SURE..he was in space. SURE…he said “I need me gold”, but other then that I have zero memory of what went on in that movie. (thankfully the franchise went on to redeem itself by sending the Leprechaun to tha hood.) What can you do? Sometimes crap is just crap…

…but not Jason X.

Oh…NO! Jason X took the concept and brought it to its COMPLETE and FULLY REALIZED conclusion. Jason X went FULL THROTTLE into idiotville! I am going to tell you this without a moment’s hesitation: I LOVED “JASON X”! THERE I SAID IT DEAL WITH IT!

The people that made this movie clearly a) loved Jason, b) totally GOT IT and understood how absurdly great it is to put him in space and c) clearly realized that just ‘cause putting Jason in space is funny on its own, you still had to make a cool movie around it and include all the things that people love about the Friday the 13th saga:

– Hot chixxx getting killed? CHECK! Jason shoves the head of an ultra hot megababe into some liquid nitrogen and then smashes her frozen face into 1000 pieces thus disappointing Lord Loren who was hoping she may appear NUDE later in the film.

– New exciting ways for Jason to kill someone? CHECK! Jason traps and completely encloses two HOLOGRAPHIC bimbos in sleeping bags and uses one to BASH the other repeatedly until death, then finishes the other one off by bashing her into a tree. At that point I nearly threw a chair out of my window from excitement.

– High body count and some sweet gore? CHECK! 23 dead! That’s NOT including the deaths of the ENTIRE Space Station Solaris which blows up when Jason causes a collision with it. I’m guessing this HAD to be a few hundred more at LEAST.

The plotline is idiot-proof yet perfect: Jason, who has been captured and unsuccessfully executed by every means necessary, is deemed impossible to kill and will be CRYOGENICALLY frozen. Before this can happen some military knuckleheads want to keep him for research and eventually then all pay the price as Jason disembowels them with in about 30 to 45 seconds flat. One thing leads to another along and Jason DOES get frozen along with the too-good-looking-to-be-a-real-scientist Rowen, our heroine. Rowen is played by Lexa Doig who I have decided I will meet and go bowling with one day. They get un-frozen 400 years later and some stupid future people make the mistake of thinking Jason is dead (DUH!) and they can make some moolah of exploiting his remains. As you may expect Jason wakes up and brutal mayhem ensues. After picking up ICED Jason from the now DESERT WASTELAND that is planet Earth the crew spends the next inexplicable sequence simultaneously getting nude, having sweet RELATIONS, and even participating in a little bondage, thus proving that even in the future Jason targets the moronic.

I’ve heard a lot of people; even horror fans knock “Jason X”. In fact I was just reading Roger Ebert’s (whom I love) review of the film and he said the following “Jason X sucks on the levels of storytelling, character development, suspense, special effects, originality, punctuation, neatness and aptness of thought.” I couldn’t disagree more. Listen up people…IT’S JASON IN SPACE what are you expecting 2001: A Space Odyssey?? Of course not! That said, anything you could have POSSIBLY wanted from a Jason-in-space movie happens in this film and to me that’s what makes it ultimately successful. It had the aforementioned dead babes and body count. It had some dead Aliens, and even a %$%*@ holo-suite! This movie knew EXACTLY what it was and reveled in it. Reveled in the silliness and being over the top. Reveled in its campy spectacle. All while pay homage, and not condescending to the source material. The campyness in Jason X is clearly intentional and you get the sense that the producers would probably go out and RENT Jason X if they weren’t the ones who’d made it.

As bonko as this may sound, I actually thought the actors stayed pretty darn engaged considering the ridiculous sh*t going on around them. Not necessarily “good” acting mind you, but committed. Kane Hodder, Jason portrayer extraordinaire, is as focused as ever so the rest of the actors likely had no choice but to follow suit. The movie is also TOTALLY referential in a great way. Almost as if to say “Listen…you know horror films? SO DO WE! We are going to make a little best-of for you! ENJOY!” Echoes of other Friday’s, Aliens, and other teen schlock are all present.

There is a moment in Jason X whose effect on me personally is almost indescribable. Towards the end of the film Jason is FINALLY dispatched by the cute ANDROID in the crew who is upgraded to have super military abilities. SURE! WHY NOT?! She finally does what APPARENTLY no one had ever thought to do before…DISMEMBER JASON! DUH! Here’s an idea: If you don’t want him getting back up when you kill him chop him up! That way even if he DOES come back to life he’d have no arms and legs, and just be a giant stub. Stubs aren’t good at killing people. ANYWAY, Jason’s remains are left in PIECES in the ships medical unit. What happens next can only be described as one of the most outrageously UNREAL moment in the history of cinema. NANITES are released by the ships damaged medical equipment and INFILTRATE Jason’s body and REBUILD him using pieces of metal from the ship into a gigantor MEGASUPER Jason. The healing POWERS of the nanites had been demonstrated earlier in the film so as they SLOWLY poured out over Jason’s body a feeling that came over me was not unlike a seizure. My face went pale. A flushed dizzy feeling came over me. My stomach clenched TIGHT. It was CLEAR what was about to happen, but the exact end result was a mystery. “Is what I think going to happen ACTUALLY HAPPENING?!” When it did I laughed in a way that can be best described as ‘violent’ or ‘disturbing’. “HAAAA!!!! HAAA!!!!! HAAAA!!!!!” Long HONK-LIKE guttural SNORTS heaved in and out of my internal organs. I do believe at this moment I DID in fact shout “THIS IS THE %$%*@ BEST %$%*@ DAMN MOVIE %$%*@ EVER SHIT%$%*@!” Whoever conceived this moment should win the freakin Pulitzer Prize as far as I’m concerned. Think about this for a second: At the beginning of the saga Jason is a young boy who drowns while swimming in a late at an Upstate NY summer camp. Fast forward and now he’s a 10 foot tall CYBORG 455 years in the %$%*@ FUTURE on a STARSHIP in the middle of OUTER %$%*@ SPACE. People, I ask you. If that isn’t genius I don’t know what is.