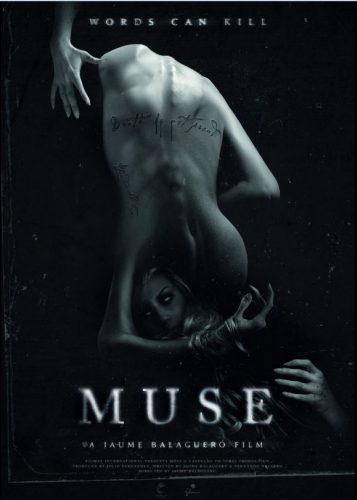 Samuel Salomon, a literature professor, has been off work for almost a year after the tragic death of his girlfriend. Samuel has been suffering from a recurring nightmare in which a woman is brutally murdered by a strange ritual. Suddenly, the same woman who appears every night in his dreams is found dead in exactly the same circumstances. Samuel sneaks into the crime scene and there he meets Rachel who has also dreamed about the murder. Together, they will do whatever they can to discover the identity of the mystery woman, entering a terrifying world controlled by the figures who have inspired artists throughout time: The Muses.

More years back than I care to acknowledge, Roman Polanski made “The Ninth Gate”. He created a world in which books contained information that could, if used correctly, open a gate to Hell. These books and this other world existed right alongside the purely mundane world that the bulk of us wander through every day. No matter how you feel about Polanski being a straight-up child rapist, the man can put together a beautiful film that is as rich as any multi-novel fantasy series. “The Ninth Gate” is one of his best films in that respect.

Let’s face it: It can be hard to make literature, books, and all things intellectual sexy or even enticing in a film since it is primarily a visual experience. In such a film, the director has to rely on art direction and a solid script to bring those abstract elements into the mix. If the director doesn’t blend these elements together properly, the viewer is left with a jumbled hot mess.

Jaume Balaguero is no stranger to horror films. He directed the now-classic “[REC]”, its first sequel, as well as the rather creepy “Sleep Tight”. He knows how to wring every ounce of dread and tension from even the simplest scene. With the release of “Muse”, he has blended literature, fantasy, mythology, in fact all arts, to a point, together with very human fears and drives to create a beautiful, yet flawed film of great depth, if you are inclined to follow the director and the film’s characters into the multi-layered world presented here.

Samuel Solomon, played by Elliot Cowan, has a nice life. He is a respected literature instructor who has just had a rather popular book published. He is teaching his packed classroom about Dante’s Inferno, for which he has a great love. He has a nice relationship, though concealed, with one of his best students. You could almost toss up your hands and ask, “What could go wrong?”

Well, after some passionate sex, Beatriz, his lover, questions keeping the relationship concealed and then wants Sam to say not only that he loves her, but then he will love her always. Confused and slightly amused, he says that he promises to love her always. Pleased, Beatriz goes to the bathroom and commits suicide.

One year later, and Sam’s life has pretty much been on hold since the death of Beatriz. Worse yet, he is plagued with horrific nightmares of women dressed in black with black lace veils ritually sacrificing another woman in a circle of salt. Just as he feels he is at the breaking point, he confides the details of his dream to a long-time friend, Susan (Franka Potente). She thinks he is just processing the suicide of Beatriz, but a news report of a similar murder changes her mind.

Obsessed with the nightmares and wanting to understand why he foresaw the woman’s death, Sam sneaks into the house to find answers. Instead, he finds more puzzles as well as Rachel (Ana Ularu), a woman who has been having similar visions. Together, they search the house.

From that point onward, Sam makes his own descent into a personal Hell to learn why he and Rachel were gifted with the visions, why is he connected to increasing bizarre and terrifying confrontations, and how to survive with his mind and soul intact.

“Muse” is a wonder full of eerily rich environments brought to sinister life with incredible and subtle lighting and camerawork. Each shot builds a dark world that exists within and beyond the everyday world as well as show you the collapse of Sam’s world and sanity.

Within this world, the actors embody their characters to the point that you tend to forget you are watching a movie and start thinking of the characters as being the actors. There are no false notes from anyone in the cast, not even the two young actors. A highlight is a scene where Sam’s reaction to something he sees (but we never do) is emotionally moving enough that you want to let loose the scream he cannot.

The script is deep, brimming over with references to classic writers and poets, yet it never talks over the heads of the audience as you have characters from different social circles who often need to explain things to other characters. This makes the film accessible and is sparingly used. The plot is not above giving you a graphic and gory set piece followed by a scene of dialogue to allow you to decompress a bit, yet nothing ever feels forced or excessive.

Let’s step back to my comment that the film is also flawed. By “flawed”, I am not referring to things that sink the film. These flaws fall into two categories: practical and abstract.

The practical flaw is that this film is attempting to translate a novel that is supposedly 300+ pages. A friend who also loves films once said that most short stories are what should be made into films, not novels. “Muse” occasionally runs into this issue. You notice conversations and scenes that almost seem to cut short. Nothing deal breaking, but it leaves you with the impression that we are getting a rather streamlined version compared to the novel. It doesn’t take away from the film, but it almost leaves you wanting to read the novel to find out what didn’t make it into the film. This is one instance were using a longer format, like a 5 or 6 episode run on a major streaming service would allow more of the story to be told. Five or six hours of something this powerful? Oh, I’d stay home from work to soak it all in.

The abstract flaw exists more in the world into which the film is being released than in the film itself. “Muse”, as I have stated, delves deeply into the world of literary academia and makes literature professors into major characters who use their depth of knowledge to discover what forces are at work. Sadly, the world is too focused on their smartphones and hyperactive net surfing to fully immerse themselves in a climate that prefers slow accumulation of knowledge through study to “Googling” everything. As a result, younger fans will most likely ignore the film or, as I found by reading some comments from various sources, find the characters turning to old reference books to be ridiculous in an age of instant access to the Internet. Sorry, folks, but some of us trust a printed page in an ancient reference tome to Reb000PLaZ and his late-night factoid posting on Wikipedia.

If you are a book nerd who also loves horror that doesn’t rely on cheap cinematic tricks, go watch “Muse” now. The rest of you should check it out. Hell, you might even be moved enough to read Dante’s Divine Comedy.