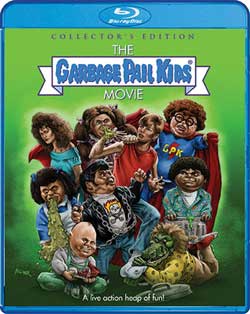 Dodger must confront the struggles of life as he is visited by the Garbage Pail Kids and intimidated by some older bullies.

The opening credit “A Topps Chewing Gum Production” does not bode well for the film to follow and sure enough “The Garbage Pail Kids” follows through on this ill omen. It fails to deliver on every level.

For those not in the know, “The Garbage Pail Kids” was a hit 80s series of collectible trading cards whose forte was gross out humour and bad puns, featuring characters with names such as “Adam Bomb” and “Bony Jonie”. They were a deliberate riff, or even antidote too, the then-popular and overly cutesy “Cabbage Patch Kids”. Its irreverence was a large part of its charm and success.

It doesn’t seem like much to base a movie upon and so it’s no surprise then that it’s not really much of a movie. The flimsy plot starts during the opening credits in which we watch a trash-can spaceship rocketing towards earth. Without any explanation, sometime between this and the opening scene the trash-can spaceship seems to now be just a regular trash-can (albeit one with tardis-like spatial properties) and is housed in an antique shop. At lights out we are treated to a flurry of hands and feet as the titular characters scurry about seeking mischief. Lights on, and they scurry back into the can before the curator, Manzini, can find them.

Their voluntary entry back into the trash-can is rather odd considering that when they are out again getting them back in again becomes a major plot point, with Manzini attempting all sorts of magical spells to do so. His motivation for keeping them also fluctuates from wanting to protect others to wanting to protect the gang itself from the “normies” out there. 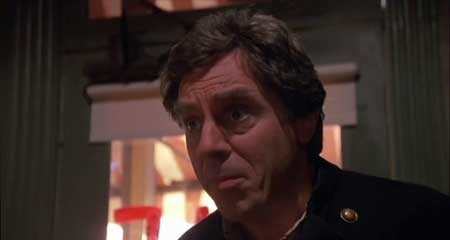 Young Dodger works for Manzini, and is harassed in the store one day by a generic gang of 80s bullies. It is during a scuffle with them that the trash-can is knocked over and the Garbage Pail Kids released. After the bullies have left him in a sewer, covered in filth, the Kids come to his rescue.

Manzini then introduces the Kids, who I will not bother to name here, save to say that they are primarily a motley collection of various bodily functions. He charges Dodger with their well-being until such time as he can find the appropriate spell to get them back in the can.

Why they are called “Kids” I do not know, for apart from their stature, they sound and behave like adults. They are animated in a stiff, dead-eyed and completely lacklustre fashion. The cards had a bright and colourful charm that is completely lacking in these uninvolving little creations. 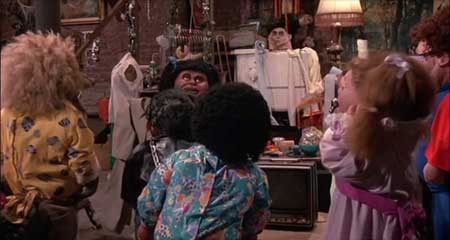 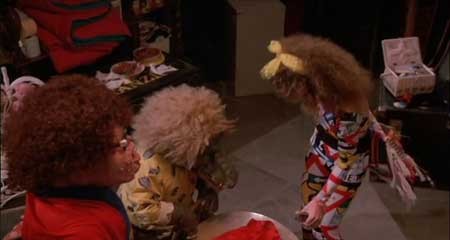 Their complete and utter lack of charm matters very little because they are very much ancillary in a plot that is concerned more with Dodger’s interest in and the pursuit of the “nicest” of the bullies, Tangerine, apparently because she is only verbally abusive instead of physically. Tangerine runs a side business selling her own fashion and, wouldn’t you know it, the Kids turn out to be adept at sewing and whip up an ensemble for Dodger that helps him impress Tangerine. She is so impressed in fact that she requests additional clothing from Dodger which she can sell under her own label. Who could have predicted a film based on a set of scatological trading cards would end up being a look into the fashion industry with a facile theme of inner beauty? It’s quite bizarre. Who is the market for this movie? 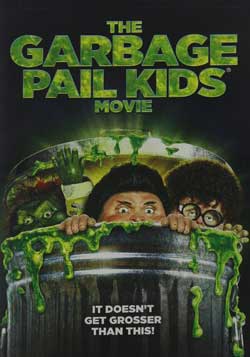 At any rate, nothing much really happens. The Kids get drunk and party with a bunch of bikers in a bar, who come to their aid later in the film. There’s a dreadful earworm of a musical number about teamwork that appears out of nowhere midway in the story. There’s the finale drenched in bodily functions. And that’s about it. 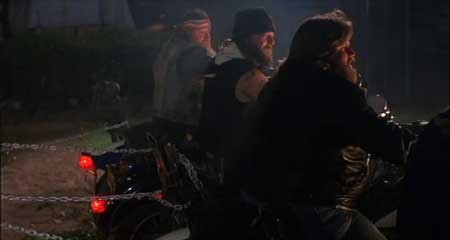 There’s absolutely nothing to recommend this film and no reason to watch it outside of nostalgia. If you are feeling nostalgic, I would suggest tracking down some of the old cards and perusing them instead. There’s far more joy on offer by doing that than by watching this, pardon the pun, garbage.