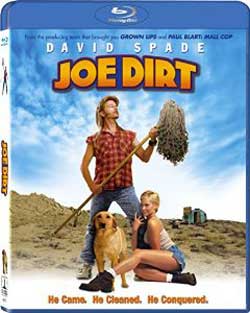 After being abandoned by his parents at the Grand Canyon, Joe Dirt tells the story of his journey to find his parents.

We’ve got the dirt! You know him, you love him, and…you wish you never knew how silly that ol mullet of yours looked. Yep, it’s the cult classic comedy featuring funnyman David Spade in the starring role of Joe Dirt. Joe, who has spent the better portion of his life searching for his long-lost parents tells his story on the air when a local radio station notices him mopping their floors. The flashback narration style of this movie works incredibly well under the humorously spoken wig wearing persona of Spade at his best. We are told about his absurd hair that was the result of a childhood abnormality fusing a wig with his open brain tissue…(or something like that) 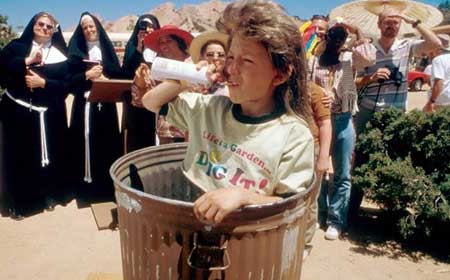 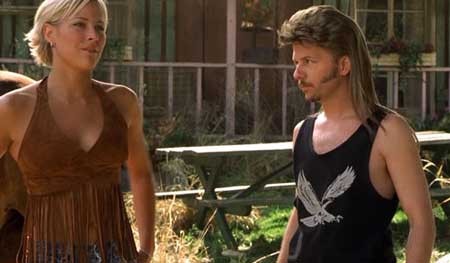 Why the parents chose the weirdest mullet on the planet to occupy Dirt’s open space….is quite beyond me..however it makes for a really good visual laugh. The film costars hottie Brittany Daniel as Brandy, Dirt’s best friend and love interest. Brittany Daniel surely wears her country girl get-up like a Maxim fantasy cover providing more than enough sex appeal to make any man wish he had himself a “gal” to call his own. 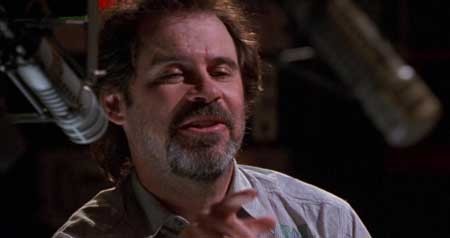 Kid Rock stars as white trash local Robbie…. a role that almost at times comes across “too comfortably” for our rock-star Michigan-bred singer. Kid Rock is a perfect choice for this film as the film’s antagonist. 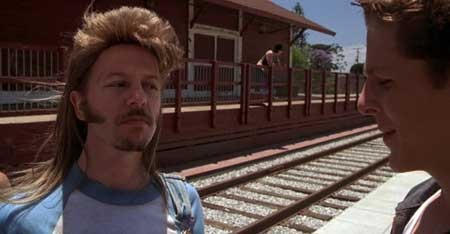 The cast features one cult star after the other with co-stars Christopher Walken, Jaime Pressly, Fred Ward, Rosanna Arquette and Adam Beach. Each provides a perfectly appropriate piece to the Joe Dirt story. So much….. that this film begs repeat viewings.

As Joe narrates his white trash lifestyle, we are taken into his often child-like purity of a misunderstood existence. His naive manner often provides an avenue for his charm to shine thru as those around him poke fun prompting Joe to just shrug it off as everyday living. It’s a funny tale of an everyday “Joe” making his way thru life’s challenges and coming out ahead. Though Joe does it wearing a hairdo that would even make Billy Ray Cyrus scratch his head.

Joe is on a journey that mirrors a modern day middle American kind of wizard of Oz adventure. One that knows full well its suggested context by film end. 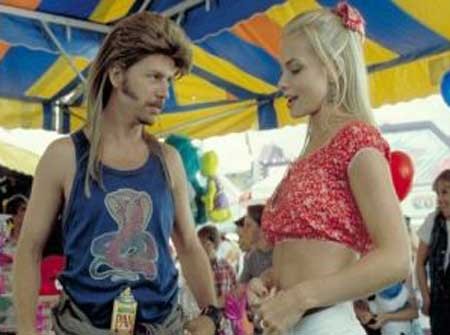 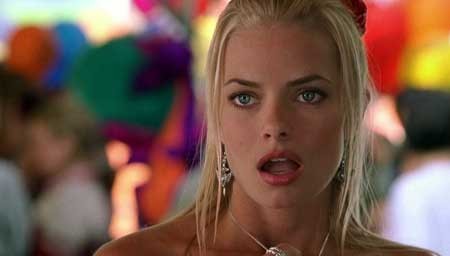 “Joe Dirt” is the kind of film that aches for a franchise in the same way you felt after seeing Napoleon Dynamite for the first time. While it exists purely to poke fun at itself and the white trash culture that comes with it….it also says quite a few things about middle America. Dang….those folks sure are strange. While most will laugh at its absurdities and country living humor, it makes you wonder how many watching this will “not quite” get the humor (as it echoes closer to home). Surely the movie soundtrack’s almost decadent set list of 80’s and 70’s middle America tunes will be enough to set the tone for the era that this film centers itself on. It’s a bit of reminiscing and laughing all rolled into one.

Joe Dirt simply is a fun film to watch wrapping itself up in David Spade’s off beat humor. His small frame and easily spoken drawl come with several midwestern one-liners that beg to linger on in your mind long after the film credits roll.

As of this review, a sequel “Joe Dirt 2: Beautiful Loser” ha just been released. I’m sure Joe’s journey will be a welcome one as this classic makes its way to bluray.

Joe Dirt is now available on bluray per Sony Entertainment