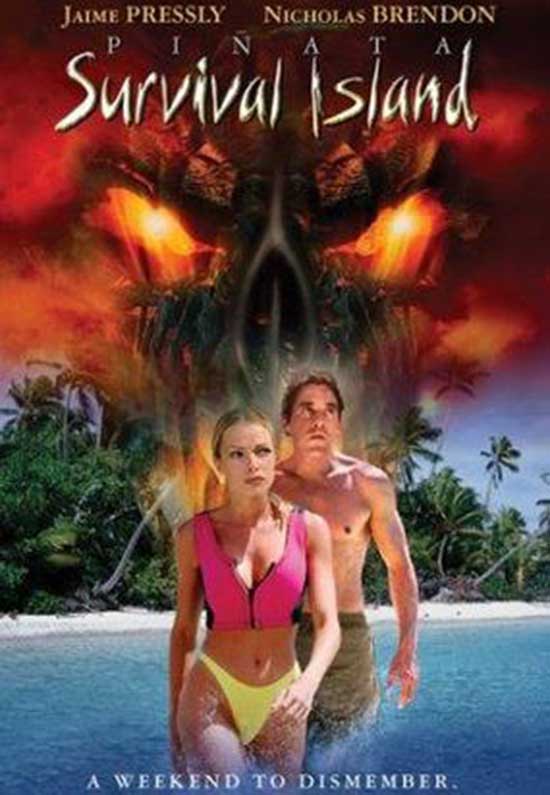 A group of teens trapped on an island, and are haunted by a demon hidden inside a pinata.

When I saw the title of this particular movie, I was a bit curious because I had never heard of it. I decided to look it up. When I saw that it was actually the film Pinata: Survival Island, my heart sank. It was a film I knew about, and even saw part of it, but I never felt the desire to ever watch the whole thing. It always looked absolutely terrible, and what little I saw didn’t dissuade me of that opinion. After learning what film I was about to watch, I was faced with the question: is it better to know what kind of misery you’re in for before you watch a film, or is it better to let yourself be surprised by the badness. I’m not sure what the right answer is, but I can’t see how going into this blind could have made the experience any better. 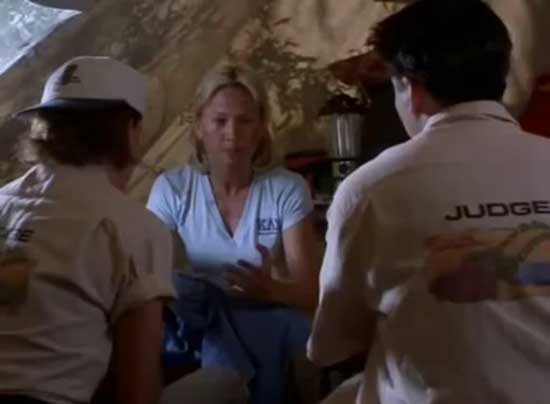 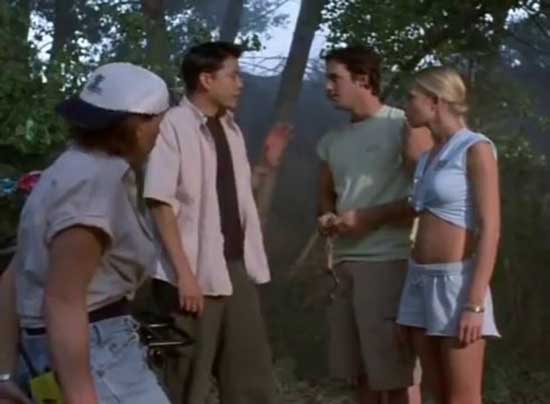 As an aside, am I the only person that wonders why some movies can be found under like a bazillion different titles? This movie is known as Pinata: Survival Island, Survival Island, and Demon Island. It’s almost as if the filmmakers feel guilty about making this turkey and is trying to hide the evidence of their wrongdoing. Or maybe they’re trying to trick people into watching it. “Well, the last two titles didn’t work, so let’s release it again under a third name? No way that’s a bad idea!” (One could argue that making the film was a bad idea).

So, Demon Island, a.k.a. Why I’m Question Every Decision I’ve Made in My Life, centers on a bunch of college kids going to an island to take part in a scavenger hunt as well as have a major party. As these things go, it’s all fun and games until someone releases a demon that was trapped in a clay pinata. Said demon starts picking up the frat bro’s and sorority babes one by one, leaving Kyle (Nicholas Brendon of Buffy the Vampire Slayer fame) and Tina (Jamie Pressley) to try to save themselves and what few survivors are left in the monster’s rampage. Ultimately, if you’re like me, you’ll end up rooting for the demon since most of the people in this are annoying as hell. 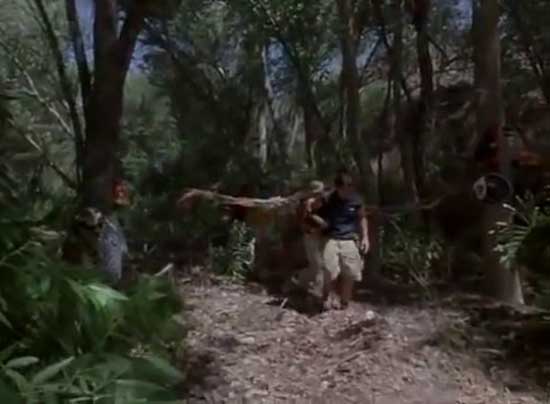 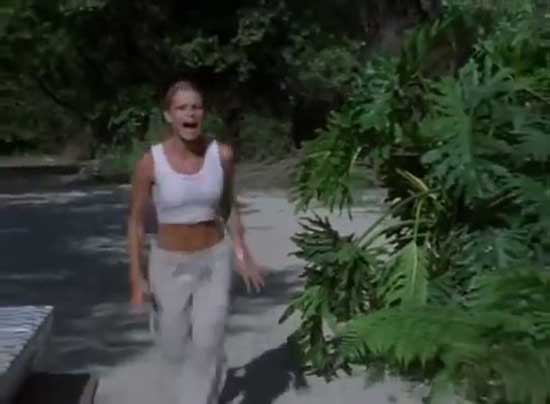 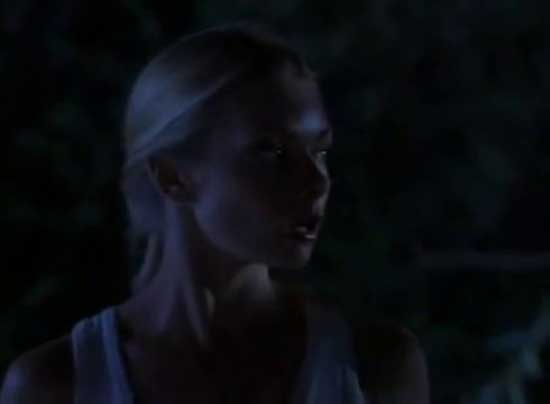 Truth be told, there’s not much this movie brings to the table. Nicholas Brendan doesn’t really work as a leading man for me. If that’s because I’m too used to seeing him as the nerdy Xander from Buffy, or just the fact that he is better suited to being a character actor, is debatable. Either way, he never comes across as the hunky hero that the filmmakers try to make him out to be. Jamie Pressley isn’t given much to do here, with her character doing little more to establish herself being more than being the main love interest. This, of course, is due to the fact that no one in this film is given any depth or development. Characters are little more than the same kind of stereotypes you’re used to seeing in horror films. To be fair, the people behind the camera seemed more interested in getting to the monster rampage than such things like “character development”, “story”, or even “decent writing”. 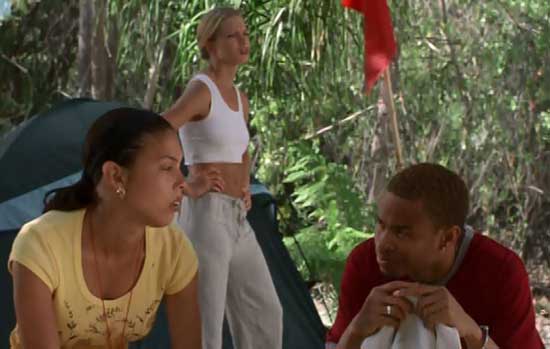 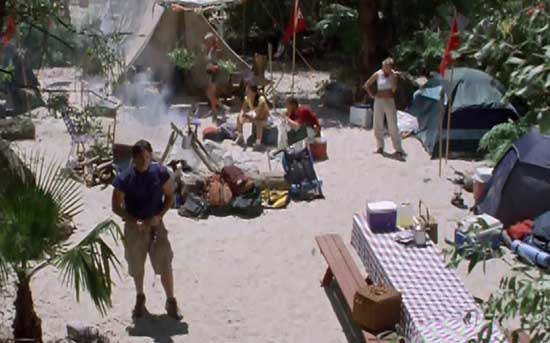 Now, I’m not opposed to a horror movie jumping straight to the slaughtering and bloodshed. Sometimes getting to the heart of the matter is the best course of action as long as what is being offered is well done, or at the very least, fun and entertaining. Demon Island’s carnage is none of those things. The special effects rely heavily on cheap-looking CGI. The monster itself looks dumb and about as intimidating as a glass of curdled milk. There are movies out there where the monster looks so terrible that it makes the film in question inadvertently amusing. The Pinata demon of this flick doesn’t even reach those lows. It’s not hilariously terrible, it’s just plain bad and uninteresting. The fact that the creature seems to change its form randomly, without any explanation to how and why it was suddenly able to do so, doesn’t do anything to elevate it. 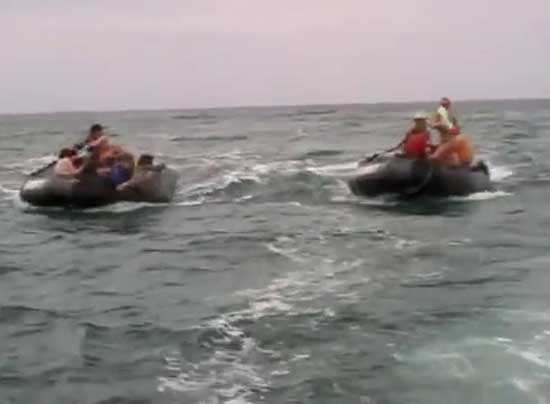 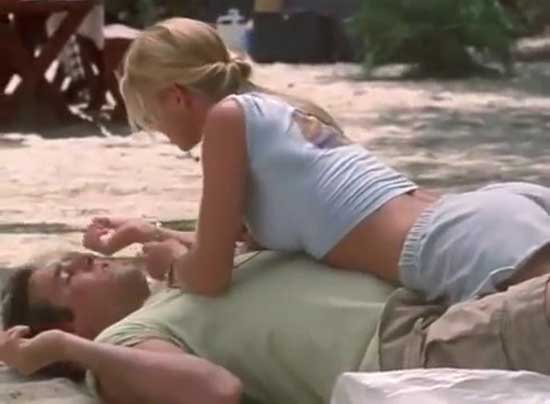 Demon Island doesn’t do enough to really to justify its existence. It’s a predictable, cliched mess that doesn’t offer enough gore or decent special effects to distract the audience from the rest of the flaws. My experience is that a lot of us well overlook predictability if the rest of what we’re being offered is entertaining. One could argue that a lot of the Friday the 13th movie sequels are a great example of that. Demon Island is not that kind of film. It’s just a bland horror movie like hundreds of others that came out in the ‘00s that’s a waste of anyone’s time.