A SUMMER OF FRIGHTFUL DOUBLE FEATURES

The Outing & The Godsend 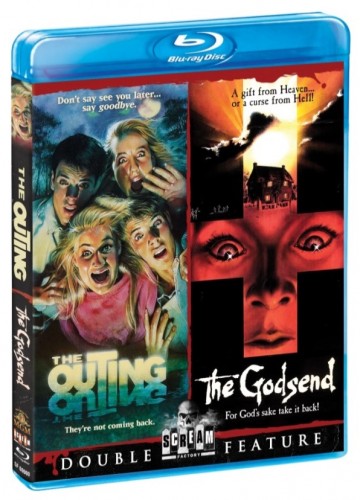 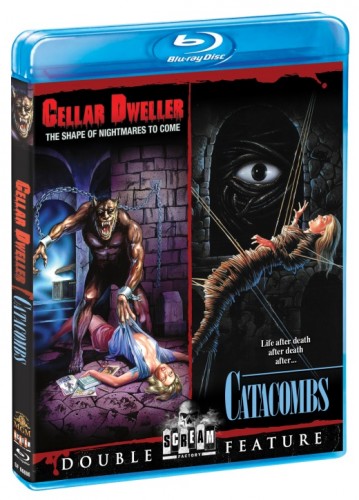 A gift from Heaven…or a curse from Hell! Scream Factory presents a quartet of supernatural thrillers with brand new HD transfers. All part of the Scream Factory All Night Horror Marathon and All Night Horror Marathon 2 releases on DVD in 2013, fans called for better video transfers and here they are! The Outing & The Godsend and Cellar Dweller & Catacombs make their Blu-ray debut on July 14, 2015.

THE OUTING (AKA The Lamp)

An ancient genie is released from a lamp when thieves ransack an old woman’s house. They are killed and the lamp is sent to a museum to be studied. The curator’s daughter is soon possessed by the genie and invites her friends to spend the night at the museum, along with some uninvited guests.

When a strange woman has her baby at the Marlowe’s house, then disappears, Kate Marlowe is forced to keep the baby, Bonnie. She loves the child, but when her own children are systematically killed, suspicion turns to Bonnie.

The promising career of a horror comic book artist ends in a fiery death when he confronts the carnage of his own imagination in his studio. Years later, an ardent devotee of the artist’s work becomes a resident in his house, now an art academy, unaware that her imagination has revived the grotesque murderer of the past…and that she may be the next victim.

For over 400 years, the curse of the Abbey at San Pietro was kept a secret. Buried deep beneath the monastery lies the Beast of the Apocalypse. The power of evil is unleashed when an American priest and a beautiful young schoolteacher uncover the unholy terror of a diabolical spell cast centuries ago. Now, it will take the ultimate sacrifice for the curse that will not be denied. Special Feature: Audio Commentary by Director David Schmoeller