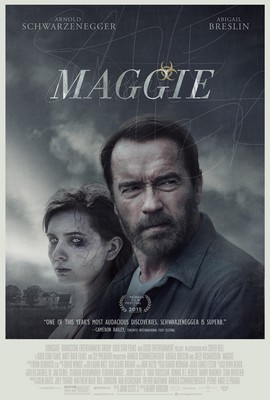 A teenage girl in the Midwest becomes infected by an outbreak of a disease that slowly turns the infected into cannibalistic zombies. During her transformation, her loving father stays by her side.

Far be it for me to say that I don’t enjoy a slow, thoughtful & depressing film every so often. Although I mainly watch (& write about) horror/sci-fi/action films – I’ve nothing against films that decide to go a different route in the way they tell their stories. In fact, one of my all time favorite movies, Wit (2001), is one of the most depressing films I’ve ever seen, and there are more than a few other truly slow & brooding films that I’ve enjoyed quite a bit over the years. I’m beginning this review like this because I’ve just watched a film called Maggie, which has gotten quite a bit of nice things written about it, but I wonder if I was watching the same slow, brooding movie everyone else did?

Starring the one & only Arnold Schwarzenegger (in a rare dramatic turn), Maggie is about a young girl, Maggie (Abigail Breslin), who has been infected by a disease that slowly mutates its victims into flesh eating zombies. But if you’re thinking this is just gonna be another zombie apocalypse film, with a group of people battling for their lives against a slew of maggot ridden, flesh eating zombies, you’d be extremely wrong. As the film opens, Wade (Schwarzenegger) is looking for his missing daughter who took off after being bitten by one of the infected. After two weeks of searching, he finds her in a shelter for the infected. Maggie hasn’t quite transformed into a zombie completely yet (it’s referred to as “The Turn” in the film), and Wade brings her back home to his farm in the Midwest to be with her for the remainder of her time left as a human being. Waiting at home are Maggie’s stepmother, Caroline (Joely Richardson) & her younger brother, Bobby (Aiden Flowers). Now reunited, the family will try to live as normal a life as possible, as they carefully watch/wait for signs that Maggie is undergoing “The Turn“. 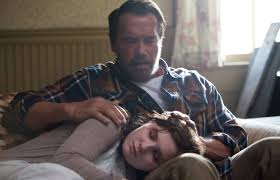 And that’s about it.

I would be lying if I said I wasn’t excited about Maggie when I first heard about it going into production. Although his star wattage has dimmed quite a bit from back in his heyday, the idea of Schwarzenegger going up against a horde of zombies is certainly one that sound like it would be a ton of fun. But writer John Scott 3, and director Henry Hobson didn’t have that kind of film in mind. Maggie is 95% dramatic character study and 5% zombie thriller, and Arnold barely gets any real zombie slaying done at all because he’s way too busy brooding and worrying about his daughter. Admittedly, he doesn’t do too bad of a job just standing around with a scowl on his face, but that’s pretty much all there is to his performance. The script really doesn’t give him a lot to actually say, and I’m supposing its because of that accent of his. If I’m right, then that was one of the few decisions that the creators of Maggie got right. Arnold is already bigger than the entire cast put together, and the image of him just standing there, grim visage and all, is still pretty intimidating. The problem is that he’s intimidating the rest of the humans in the film, and not to the zombies (of which we really don’t see too many). The idea of someone who sounds like Arnold, playing a farmer in the Midwest does sound kind of silly at the outset, but since he really doesn’t say too much it doesn’t really hurt the character. 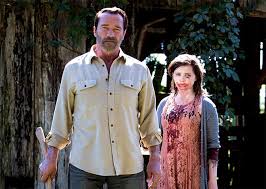 Although Arnold has the star billing, the real star of the film is Breslin, but her characterization feels extremely one note. Maybe it’s because she’s playing a disaffected teenager with essentially no hope of survival, but there isn’t much evidence of the teen she used to be before she was bitten. It would’ve served as a nice contrast to her character if the script made some allowances for Breslin to lighten up just a bit – perhaps in flashbacks. Everyone else in the film does as good of a job as can be expected with the extremely dour (& dull) script. Maggie begins with a haze of doom and destruction hanging over it like a pitch black sky, which might’ve worked a lot better if the world didn’t seem all too distressed over its situation. The sky is overcast and there are fires burning everywhere you look, yet the hospital doesn’t seem to be in too bad of a shape, there’s lots of food/gas available, and although we don’t see too many other people in the film, those we do see don’t seem to be bothered by the zombie situation. It’s treated as more of an annoyance than anything else, and that takes a lot of the urgency out of the film. The characters here don’t seem to have much in the way of emotion, they’re content to read their lines in about as monotone a manner as is possible – no urgency at all. 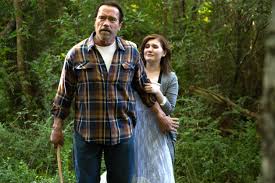 The few and far between zombie sightings we get reveal some interesting makeup design, but ultimately it’s nothing we haven’t seen before. The extremely gray look that Maggie has does work in its favor though, and cinematographer Lukas Ettlin does manage to make the whole thing look apocalyptic enough to satisfy those of you who dig that sort of thing. The music in the film (by David Wingo) sounds like a group of rejected songs from a George Winston album (look him up on YouTube), which might not have been too bad if I was watching a Hallmark Channel film, but here it serves only to lull the audience into a state of catatonia. 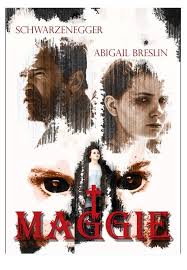 I refuse to apologize for expecting a kick ass zombie thriller with the governator blasting away at hundreds of hungry zombies with his trusty AK-47 as he lets loose with a couple of well placed catch phrases (Hungry? Eat this!). After 10 minutes of Maggie, I knew that wasn’t what I was getting, but still I tried to enjoy it for what it was. But ultimately, I found it to be way too dull and slow moving to satisfy my itch for some real zombie mayhem. Kudos to the creators for trying to do something unique, and multiply those kudos by two for Arnold trying to go out of his comfort zone and try something different. But, save for the nifty cinematography, Maggie is a failed exercise any way you look at it.