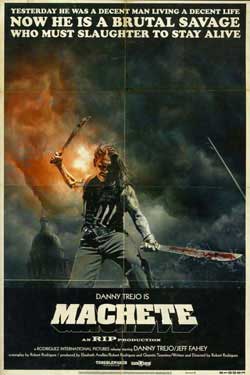 After being betrayed by the organization who hired him, an ex-Federale launches a brutal rampage of revenge against his former boss.

Hey there, Hi there, Ho there, you’re as well….wait a minute. That’s not my intro. That belongs to that f*cking mouse that represents a f*cking corporation that I happen to dislike a bit (Even though I was in Florida, a few weeks ago & had a cool time). This is The Black Saint preaching to all of you, my faithful acolytes. Today you have the pleasure of reading my ruminations on a film called “Machete”. But before that I have to voice my displeasure at something I saw at the bijou I saw the movie in….children at “R” rated movies & the morons who bring em’. As you all should know “Machete” is rated “R” for a reason. Why would supposedly intelligent people who call themselves “Parents” bring a 2-3 yr. old to a movie like that? 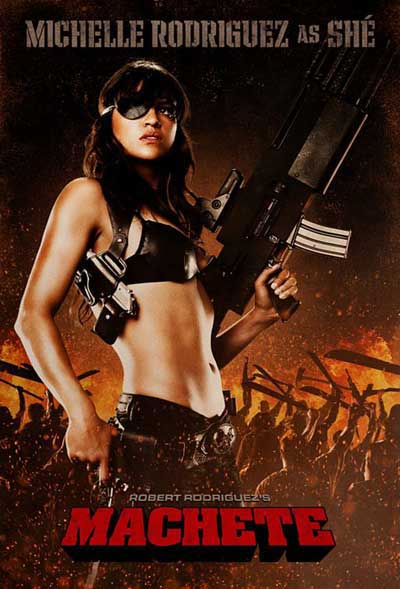 Well I got my seat in the back of the auditorium & had my usual (1 Hotdog, Coke, Small Corn, no butter). I was wearing my darkest of Shrouds & making some notes about the movie I had just saw (The Expendables). All of a sudden I hear a horrible whine & turn to my left only to find a couple of these “Parents” settling down in MY ROW with a child of the previously noted age. I give them til’ the movie starts to quiet their f*cking post fetal monstrosity or I will be adding a new menu item to my usual bijou meal.

The child is just walking up & down the row & babbling to herself before standing in front of me & staring like a little f*cking little meal for me before her “Mom” would grab her & apologize. Cool, as long as the piece of meat can be quiet. But then I thought of why the f*ck is the kid here anyways? No way the parents don’t know what’s the movie is rated or the subject material soon to grace the big screen. You morons couldn’t find a babysitter in time? So what? Stay the f*ck home. Babies don’t belong anywhere in a theatre with anything but “Barney & Friends” is on it. What is her little mind going to get from watching gore soaked action films? Nothing, maybe. But she might be getting marked for life by looking up at the screen & seeing what this blood beast tosses all over it.

But wait a second..what the f*ck do I care bout’ the kid? By all means bring all of the little fetuses over, maybe we’ll get a great new script, actor, director in the horror genre to give us something we all live for (at least I do): Mindless,f*cking,balls to the wall horror done for the fans. 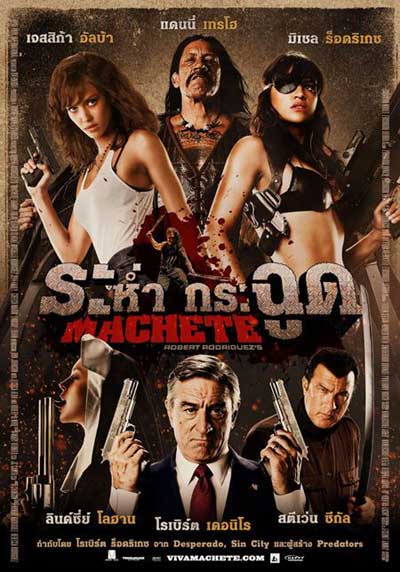 And did we get it! “Machete” is a f*cking exploitation Grand Slam! Robert Rodriguez & Alvaro Rodriguez’ plot synopsis is simple enough A former Mexican federale is hired & betrayed by the organization who hired him to assassinate a Congressman as he searches for the man who murdered his family & left him for dead…..I might’ve made it sound a little deeper than it actually is. I don’t know about all of you but i grew up going to 42nd street watching triple play shows featuring movies that Machete” are paying homage to.

So as i said earlier Machete, played by Danny Trejo who is one ugly, scary, look like I’ll kill you looking Mothuerf*cka gets betrayed by a congressman & his business partners. He is searching for Torrez (Steven Seagal) the man who is responsible for murdering his wife & child in front of him. Machete was a Mexican federale who wasn’t on the take 3 yrs earlier & refused to work for Torrez He was supposed to have died in the fire but didn’t & three years later he returns to avenge his family.

He is being tailed by female Federale, Jessica Alba who thinks he’s part of a revolution group lead by Luz (Michelle Rodriguez). Slowly but surely he begins to become dragged into the revolutionary group who by the way are fighting against severe immigration laws A senator (Robert DeNiro) is running his campaign for re-election on. 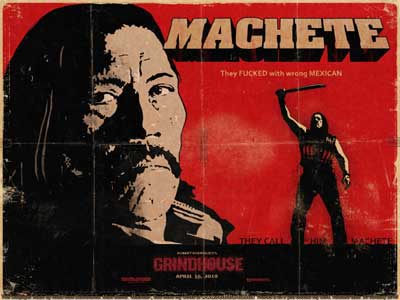 Machete is offered $150,000 to assassinate Senator McLaughlin by a business man named Booth (Jeff Fahey) who is against stricter immigration laws because what would Texas do if there were no Mexicans around to do all of the dirty work convincing him that they are fighting for the revolution & not against it. Of course the Senator is shot (In the leg) but not by Machete but by one of Booth’ goons & of
course it’s all been recorded on video to get more votes for Mclaughlin.

Machete, not taking to well to being taken escapes discovery but with his face all over the news, where can he hide? He can hide with Luz (Michelle Rodriguez) who is in fact leading the resistance against McLauglin & his re-election campaign. She lives in a secluded shack filled with weaponry & computers organizing their fight. She also runs the local taco stand which she also spreads/receives information from.

In the meantime Booth (who’s working for Torrez) is having home problems with his daughter (Lindsay Lohan) who he has to pick up from meth dens where she is laid at all about the city. As well as having Torrez’ insistence that Machete is killed before he can get the truth out to the press. I gotta limit what I say from here on in because to continue is to spoil & I don’t like to spoil movies for anyone. Movies are sacrosanct to the Great Black Saint & I cannot deal with people who enjoy giving too much away. I will find you, my list is almost complete…

But what I can tell you is that not only do we get Lohan’s titties on screen (Like she wasn’t ever gonna have to do that eventually) but we get a nice shot of Alba in the shower, full body & sideways. It was enough for me people. As a matter of fact there is quite a bit of nudity & violence to come as the movie progresses. Hell, Machete kills about 10 guys in the first 5 minutes anyway. Just right for a toddler to share with her “Parents”.

Danny Trejo who is also currently in the mediocre “Predators” is one serious bad ass! With his leathery & pockmarked face surrounded on both sides with his long & greasy hair he is someone who you would not want to meet on a lit alley let alone a dark one is pitch perfect as the title character. He is a scraggly dude who really doesn’t have much dialogue in the movie but doesn’t need it. His mug is more than enough to let you know he’s not one to f*ck with. Rodriguez is an absolute knockout as Luz & knows how to wear a leather bra & pants with a eye patch on her face & still be f*cking gorgeous. Jessica Alba performs well in her role as well but seems a little too young looking to be working as a Migration officer in the states. In addition, she’s just too beautiful looking to be playing the part. Especially when she has to sound tough occasionally. There is an appearance by Cheech Marin as Padre, Machete’s brother who happens to be the local priest as well. Steven Seagal has put on a few more pounds & speaks Spanish with a terrible accent has a pretty good line towards the end of the movie & is better than I could have imagined in a relatively small role. Jeff Fahey & Lindsey Lohan chew up whatever dialogue they have (not too much for LiLo) with energy & alomb.

And as the corrupt senator Robert DeNiro is hilarious & menacing at the same time. The televised ads that pop up during the film regarding his re-election are very funny as well. It’s a pleasant surprise to see DeNiro in a role like this but it’s cool that we don’t have to wait for Scorcese to give him a good role to see him in one.

“Machete” is a movie that was made in the great tradition that exploitation movies of the late 60’s-early 80’s had. There is no real emotional core to it, but it is a non-stop thrill ride splattered in gore that should thrill those who know what they’re getting before they sit down to watch it. And those who don’t know should get off of there snooty asses & watch this “Piranha 3D” and try to get the idea what movies were like when an Horror/Action movie knew how to get the audiences asses off the seat & yelling at the screen!! Oh, but those were the days people. Ya just hadda be there I guess.

And Guess what? That little f*cking cretin child who was so noisy and mobile before the movie started watched the entire film with complete concentration sucking on her Pacifier (I looked over from time to time). I left the theatre thinking COOL! That kid is gonna grow up to love these movies & maybe be a part of making one someday. But then I thought the child might have been frozen in fright watching heads roll (Literally) across the scene. Will she sleep tonight? Will she have nightmares? Well F*CK HER & HER ASSHOLE PARENTS for bringing the little thing out to see this movie. I hope the former comes to pass for the little one & not the latter. Unfortunately I fear the latter after looking’ in that kids eyes after the movie. Oh well, more meat for the Saint’s grinder is all she means to me in the end. Another acolyte for my army. It’s all good, people.

So now, go scrub between your toes while you bathe, Throw out the garbage before you smell it (My Minions go thru it on occasion) & say your blasted prayers…… to ME!!!