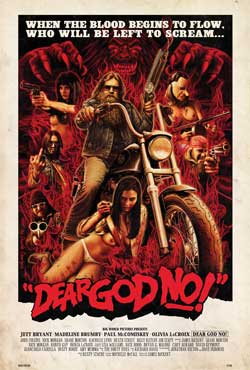 From the first scene, James Bickert’s “Dear God No!” (2011) screams grindhouse. This film set out to be something specific, and it did the job. If a viewer is looking for an intelligent story, strong film-making, or talented actors, they should stay far away from this piece! Bad cinematography, terrible acting, sub-par storytelling, sexual exploitation of women (including nuns!), and a strange storyline all add up to what could be considered a real grindhouse movie experience. The film starts with a gang of bikers leaving the scene of a multiple murder, which is implied to have been their handiwork. Soon after, they murder a mother on the side of the highway, as her son looks on in horror and wets his pants. This sets the tone for the rest of the movie. In a bar scene shortly after, the viewer sees multiple strippers in masks, and watches a sick customer drink a tampon shot. Yes. That happened on screen. 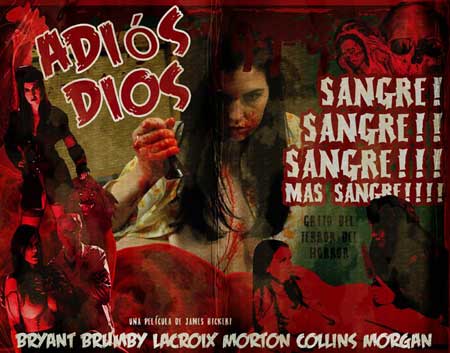 It seems that Bickert may have cast actual bikers as the biker gang. None of them show even the remotest inkling of acting experience. They all very much look the part as well. The actors do seem to show that they are having fun on screen, including: shooting strippers, snorting coke, stabbing less masculine bikers, hitting on pregnant women, and starting as many violent outbursts as possible. 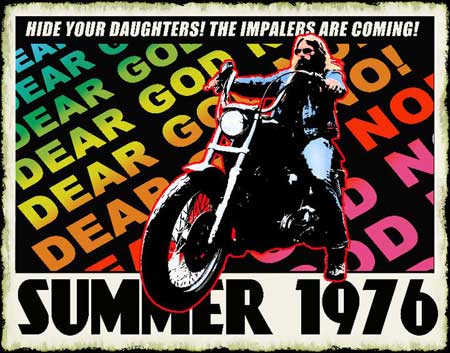 The relatively well known recent grindhouse homages “Planet Terror” (2007) and “Death Proof” (2007) both found cult audiences. The “downside” of both was that they were very well made, which goes against the idea of grindhouse to begin with. The original 1970’s movement was revered for the fact that it ignored many popular filmmaking techniques of the day. This film falls more towards the original movement, than the high brow fare of today. Unfortunately, there is a reason the original movement died out. A happy medium between today’s pieces and the classics of this movement could help to make films like this one better in general.

While the acting is bad, the technical work is really the worst. It is shot as if it were a web series, with mostly wide, long takes, and terrible blocking. The lighting seems to be nothing more than open windows. While it is decently hard on the eyes, the over-the-top gore effects can help bring an air of fun to the film. The practical effects still are not very believable, but their camp is still fun to watch. 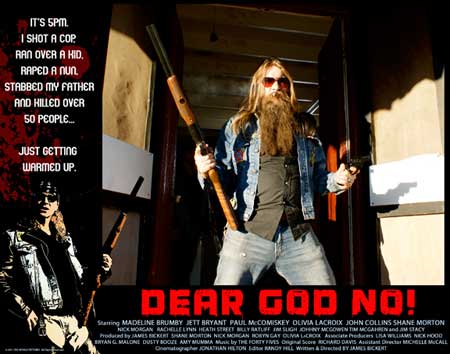 Of course after a while a story begins to develop. A rich anthropologist (Dr. Marco, played by Paul McComiskey) studying some strange creature, which he has locked in his basement, becomes the object of the gang’s desire. As they harass and torture their kidnapped victims, the Doctor sends his daughter to the cellar, which introduces the audience to the strange noises the creature makes in its cell. 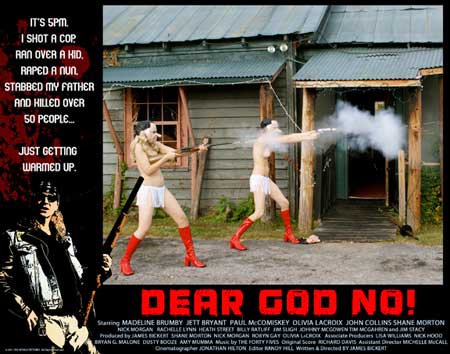 After a rape and murder montage, the monster makes its first appearance, and really does not live up to the hype that has been built up around it. It does a nice job of tearing one of the bikers apart though, which ends up being one of the most well shot sequences of the piece. 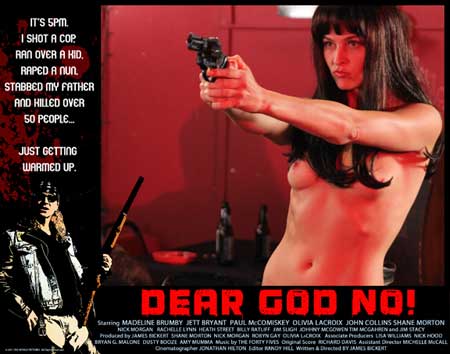 Ultimately, this piece delivers what it wanted to, a terrible movie with a slight sense of humor. Unfortunately, it crosses the line quite often, and loses what could have been good fun in the vein of classic slasher films, and becomes too exploitative. The violence is almost too campy, and the talent and technical aspects of the film leave much to be desired. It would have been nice if the filmmakers were able to find the happy medium between the original grindhouse films, and the high-brow reboots as of late. This film went way too far in the direction of terrible filmmaking, and lost what it could have been. But, for those who are looking for that kind of experience, this one delivers, as many a film festival has already found out (it was a winner at the Arizona Underground Film Festival, Pollygrind Film Festival, and Zinema Zobie Fest).