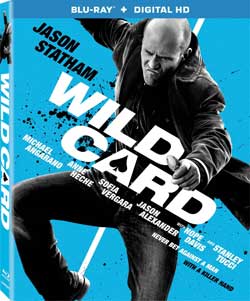 When a Las Vegas bodyguard with lethal skills and a gambling problem gets in trouble with the mob, he has one last play…and it’s all or nothing.

There’s a reason that I end up loving “most” Jason Statham-starred action-films. Statham is a dynamic actor often combining sensitivity with balls out action sequences. Skilled and quite fast, Jason knows how to deliver his scenes in a way tha “at least” during the film appears quite effortless.

We know Ill usually come away from these movies being entertained, even if I feel less about the plot itself. “Wild Card” was a solid movie that echoes some of Statham’s previous hit films by playing to the audience exactly the way that we signed up for. In other, this ones a keeper and a Statham must have” . 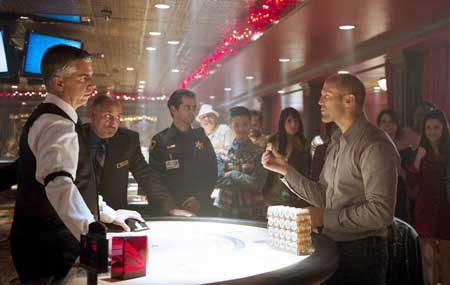 Nick Wild (Jason Statham) is making ends meet living his days as a “for hire” Las Vegas body guard. His reputation seems to have proceeded him at times luring in all kinds of tough guy jobs that need his particular area of expertise. Wild doesn’t mind….it’s a days pay and it helps to support his compulsion for gambling. The strip is often full of this kind of “need”, whatever it involves, keeping others safe from harm or inflicting payback on those who deserves it. Wild is at a point in his life where he’s ready to leave it all behind despite his talent for getting the job done.

This is until a close friend, Holly (Dominik García-Lorido) is assaulted, raped and dumped into the street. Holly survives only to come calling on Nick for some assistance in proving payback.

The strip has rules, which shouldn’t be crossed. This includes hit men and tough guys for hire. Wild finds himself in  a situation where he is forced to inflict payback upon some dirty thugs who crossed the line. The head thug  Danny DeMarco(Milo Ventimiglia) is the son of a powerful mob boss that on the most part should be off limits 9even to Nick). Nick knows that once he crosses the line, he is going to have to deal with more than a few things.

Wild card” was written by Award-winning writer William Goldman and directed by Simon West. West of course no stranger to action films that include “Tomb Raider”, “Con air” and “The Mechanic”. In fact that lineup alone should reason to give this movie a go, however despite West’s backlog of great releases…. “Wild Card” is one to add to the roster.

In research, the film was originally titled “Heat”, which is also a remake of the 1986 Burt Reynolds film. More fun facts here cite that Statham underwent a special diet for the film that consisted of Spinach and brown rice.

Basically if you are up for the “thrills-a-minute” style that Statham exercises so well…then Wild Card is your pick!

Wild Card is now available on bluray from Lionsgate films.