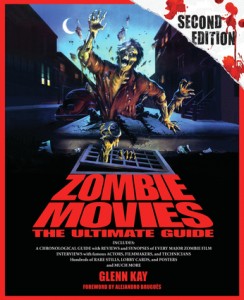 Glenn Kay sure loves his zombies! You would have to, to dedicate so much time to reviewing, categorizing and explaining the hugely wide gamut of titles on the market and past broadcasts. We start as early as the 30’s and work our way up. Not too bad for fans of the popular genre I must say. With 342 pages, and a nice thick reading size paperback this one’s a keeper .

Bonuses off the bat were things such as a easy reading format, pictures with almost every entry (a rare feat in itself), a rating system to reference, bold titles, dates and chapters for each decade. Don’t forget the great color insert section, just to break up the B&W a bit. Since films are categorized per decade the also run in year order rather than alphabetical order

Now as I find a new zombie book, the difficult issue becomes how to distinguish on from the other. Well that is easy in this book. Glenn has a great writing style that stands on its own. He keeps it informative, funny, trendy and down to earth. you wont find much in the overanalytical pompous nature of writers. Glenn prefers to tell it like one zombie fan to another. Honestly when reading within the first 10 pages I was writing down title name of films I just had to look up and get somehow. (ex: “The incredibly strange creatures who stopped living and became mixed up zombie”)

Though if you like that you got alot of title listing to do. Each film is reviewed in short segments that pretty much tell you up front if its even worth your wild. I love this aspect as I can identify quickly the kind of films I would enjoy spending time with. Though in these segments great fact points are mentioned and any other info that the author feel is necessary . You get longer bits also when they are an important part of that release. Such as a little about the mall they used in “Dawn of the Dead” or the details surrounding the multi named, copy cat italian version “Zombie”. A few titles might even surprise you as they don’t come to mind when I think of zombies (aka “Let’s Scare Jessica to Death” or “Prince of Darkness” ) but a worthy explanation is given so no worries.

There’s plenty of back stories also about directors issues, and struggles. Budgets that surprised and ones that lost. The trails and tribulations of films that still sit on video shelves, ones that got DVDed and more than a few tales of interest.

Extra bonuses make the ride even more of a hoot. “Know your monsters” is your quick guide overview of monster categories just so you know the difference between a “ghoul ” and “zombie”. Or maybe “pod people” for that matter. “Weirdest things I’ve seen in zombie films” will make you do a double take as Glenn gives ya a quick run down. I like “hungry zombie eats himself alive”

To give the book some credentials he has included a number of interview he conducted with various zombie film related persons. He also gives us some old south history about a few events that may have inspired the idea of zombies, into to mention of the obvious carryovers from African voodoo lores.

What else?….. We get the same care given to the Asian zombie releases as well. Because with titles like “Sars War” and “Shaolin VS. Evil Dead” you might be missing out!

Where does all this fun lead? “The greatest zombie films ever made”! so get ready for an essential list from an obvious expert!

I could go on into more specifics though really this is s great book and not because its about zombies. It’s handled and written with care for the joe-public readers who might fall asleep with a rich academic bound volume that misses the fun altogether. A true book for the genre and the zombie fan in every one. Though for now I’m gonna Google a few of those titles I mentioned and get to the watching!

If you’re getting around to purchasing this book in its 2nd edition release, it’s worth noting what has changed since 2008. As we have come to learn (and confessed by the author), the zombie revolution is far from over receiving “resurrection” (so to speak).

After 2008, we began to not move away, but embrace our zombies to full effect culminating in some of the greatest zombie releases to ever come out of Hollywood (or other). Edition 1 leaves off at about start of 2009. Edition 2, takes it up to a partial 2012 with some notes on films “not” yet released. Though during that time we were graced with of course “The Walking Dead- TV show, “Zombieland”, The [REC] films (including it’s copycat “Quarantine”, “The Crazies” (remake), “The Dead”, “Mutants”, “Rammbock” and several others joining the ranks.

Edition 2 reviews all of these and comments on ones yet to come. The edition adds about 100 new pages, with more images, revisions to the original lists, and a renewed perspective on the zombie genre.

The book is a perfect companion read for zombie fans (of which I expect to revise itself again maybe in 3-4 years). Whether you are a die hard or just curious on what is out there to see, you can’t got wrong with “Zombie Movies: the Ultimate Guide“. So make yourself an inch or 2 of new space and add this great read to your library.