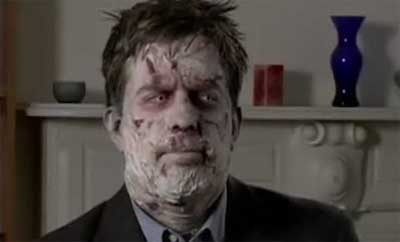 Meet Glen. Glen (Ed Helms of The Daily Show) likes to read, do crosswords, and play basketball. He’s on the lookout for a girlfriend. Oh, and one other thing-Glen is a Zombie-American. This educational documentary will help audiences understand the challenges zombies face in our society. As a plea for tolerance, it aims to clear up many of the terrible stereotypes and misconceptions we have about zombies. It is the filmmaker’s hope that this film will help people understand that zombies are just like everybody else…if everybody else is a walking, talking, rotting corpse

Zombie American is a surprise addition to the zombie shorts arena. For one, it features the talented Ed Helms as Glenn, the average ordinary zombie who is just trying to get thru life and fit in. Told per interview narrative, Glenn takes us thru his everyday existence and curbs a few stereotypes that culture has labeled his kind. Sure he’s one the undead, but he’s also a part of society trying to find a date, see a movie and just walk down the street without being stared at all the time. This good natured romp is a hilarious look at the everyday zombie and his perspective on life. Glen appeals to our sympathies with a “guy just tying to get thru the day” appeal.

In a almost freakish way, it mirrors that same approach as the actor Helm’s main gig “The Office” with interview interjections and a camera crew follow around. If you’ve been wondering what Ed Helms would look like with Manson eyes and decaying skin, then this is your chance to spend some time with Glenn the everyman’s zombie. Highlights include traits such as the “zombie walk” which is affected by rigor mortis decay setting in on joints and a constant re-adjustment. You might also appreciate his metaphorical take on basketball and the common pursuit of zombies fitting it. Directed by Nick Poppy – Killer stuff!