As a hardcore horror fan I’ve always taken pride in the fact that I’ve got a pretty strong stomach and can watch things that make most normal people feel sick. I’m a gore hound at heart and love to see an ample amount of blood and guts in my horror films. While it may take quite a bit to gross me out there are several horror movie scenes that left me feeling a little bit queasy after I watched them.

I give you my personal top ten list of the grossest movie scenes I have ever witnessed. Please be aware that there are some spoilers ahead and you may not want to read any further if you have a weak stomach or while you are eating lunch.

I love The Exorcist and think that it is without a doubt the scariest movie ever made. At the same time it is also pretty damn gross thanks to all of the vomiting that Regan does during the course of the film. I have always had a problem with vomit and nothing makes me sicker than to be around someone when they are throwing up. I can watch people get cut in half all day and blood doesn’t faze me, but when I see someone vomit I usually do the same thing seconds later as a result. This scene has always grossed me out because of the fact that the nasty-looking vomit (which was made with pea soup and oatmeal) hits poor old Father Karras right in the face (and I’m sure that some of it got into his mouth). My wife loves pea soup and is always trying to get me to eat it but I can never do it as I just can’t get this image out of my mind long enough to even attempt to try it. I’m afraid if I did I would have my own reenactment of this scene mere seconds later. 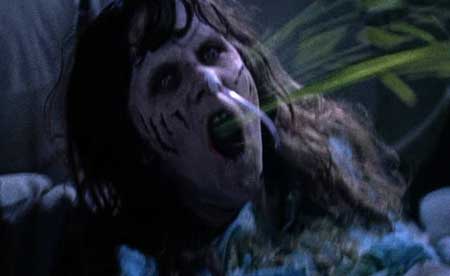 9. Guinea Pig: Mermaid in a Manhole-Painting with Blood and Pus

The Guinea Pig series from Japan is seriously messed up for a number of reasons, and while I think that The Devil’s Experiment and Flower of Flesh and Blood are pretty disturbing and disgusting in their own right Mermaid in a Manhole takes the cake for being just a little bit grosser. It basically involves an artist finding a mermaid in the sewer that is covered in disgusting boils. So he takes her home with him and what does he do? Paint with the blood and puss that comes out of said boils after they pop, naturally. The fact that she develops more and more realistic-looking, oozing blisters as the movie progresses up until the point that she is basically just one big boil makes this a very hard movie to watch, especially if you happen to be eating while you are viewing it (which I made the mistake of doing. I was never able to eat goulash ever again after that night). 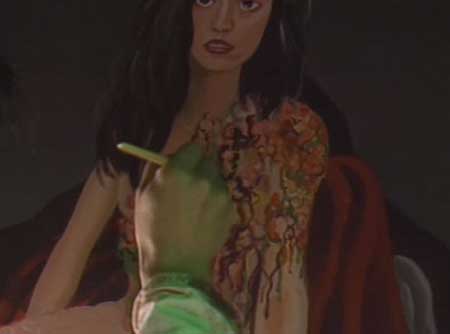 8. The Human Centipede (First Sequence)-Feed her!

The Human Centipede is a bizarre and just all around disturbing movie for a lot of reasons. Having your face surgically attached to someone’s ass is bad enough, but what about when that person has to go to the bathroom? Lindsay finds out firsthand when Katsuro proceeds to take a crap right in her mouth as the evil Dr. Heiter urges him on by excitedly shouting “Feed her!” repeatedly as he does it. This is probably the sickest scene from the movie (which is saying something as it has a lot of sick scenes) and guaranteed to gross out pretty much anyone that sees it. In the famous words of Dante Hicks from Clerks II, “You never go ass to mouth!” 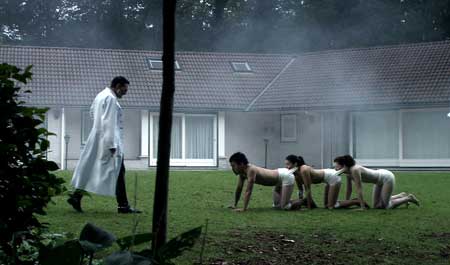 I thought that David Gregory’s segment “Sweets” from this film was pretty gross in general for a number of reasons, but one scene really stood out among the others for me and was pretty hard for me to forget no matter how hard I tried. It involves two women at a dinner party talking and one of them has a mouthful of salad when she suddenly feels the urge to sneeze. She ends up blowing a mouthful of a disgusting looking mixture of chewed up salad, spit, and snot onto the other woman’s chest and I came damn close to gagging when I saw it. To make matters worse the woman then takes a cracker and uses it to scoop up the mess…and then eats it! Yuck! I know that this scene probably doesn’t bother a lot of people considering what else happens in this segment, but I thought that it was just plain nasty and every time I have had salad ever since I can’t help but think about this scene.

The Fly is an awesome movie that has some of the greatest special effects of all time if you ask me. There are a lot of very gross things about it such as Seth Brundle’s increasingly grotesque transformation and the fact that he has to puke on anything that he eats as he becomes more fly-like. The bit that always made me look away though is when he realizes that his fingernails are coming off so he proceeds to peel them away. It’s a gross and painful looking scene and I know a lot of people who are really bothered by it when they see it. Not that the rest of the movie won’t make you a little green in the gills as his condition worsens throughout the course of the movie as he completes his transformation into a human/fly hybrid, but the scene with his fingernails is quite possibly the sickest and most unsettling in my opinion (though my dad-who has a huge problem with anything having to do with teeth falling out-would probably argue otherwise as he wasn’t happy when Brundle started losing his teeth in the film).

5. Slugs: The Movie-Eating a Slug and its Aftermath

Let’s face it, slugs are gross little critters. They’re slimy and just nasty as hell in general. I know someone who is so freaked out by them that she almost goes into full panic attack mode when she spots one, so understandably she refused to have anything to do with this movie which is probably a good thing as I have a feeling she would have ended up getting very sick if she’d ever checked it out. The movie’s pretty gross for the most part thanks to the title characters (who go around eating people) but there’s a scene that involves a man accidentally eating a slug that has been cut up and put into his salad that never ceases to make me want to barf when I see it. To make matters worse a day or so after he eats it his head basically ends up exploding when a bunch of slugs (and worms for some unknown reason) eat their way out while he is dining in a fancy restaurant. Yes, the movie is stupid as hell and just all around goofy (come on now, killer slugs? Really?) but I always felt kind of sick after seeing this part. 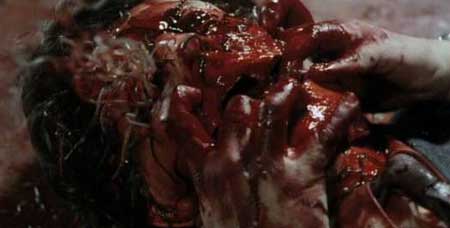 4. “They’re Creeping Up on You!” segment from Creepshow-Roaches, Roaches, Everywhere

Most people that know me know that I just cannot stand roaches. Just the very thought of them make me sick to my stomach so watching this segment was actually pretty hard for me considering the fact that there are roaches everywhere. I love Creepshow but to be honest I usually skip this part of it when I watch it just because it is so disgusting. The ending, which features thousands of roaches emerging from Upson Pratt’s dead body is one of the grossest, nastiest things I have ever seen in a movie in my life and I just can’t handle it. I may sound like a giant wuss here but I can’t help it, I really, really don’t like roaches. Nasty little bastards…

3. Salo (aka The 120 days of Sodom-That Dinner Scene
While it isn’t necessarily a horror film in the traditional sense I thought that I should include this scene on the list as it is absolutely disgusting. While the entire movie is gross, disturbing, and makes you feel like you need to take a shower after you watch it the scene that I am referring to involves people eating human feces. I have personally known people who have thrown up after seeing this scene and I don’t really blame them as it is one of the grossest moments ever put on film. People warned me about it before I saw it but because I am a moron I didn’t listen. If you want to see something very disgusting that will without a doubt gross you out make you feel a little nauseous then this is the scene for you. Don’t say that I didn’t warn you and good luck trying to stop thinking about it after you see it. 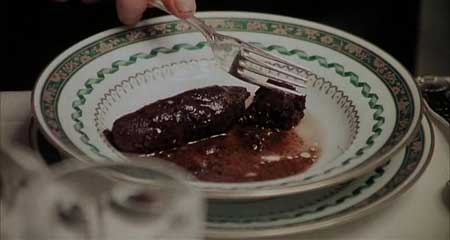 2. The Worm Eaters-Well, Pretty Much the Entire Damn Movie

Worms are right up there with roaches for me, so you can imagine how much fun I had watching this incredibly gross movie. If you enjoy seeing people eat hot dogs, hamburgers, birthday cake, and other food items with worms in them then you will have a blast with this movie as these things happen over and over again during the course of the movie’s running time. Even though it isn’t a serious film and considered to be a comedy by many people it still made me sick and I had a lot of trouble eating anything after I watched it. Don’t believe me? Then just check out the trailer as it does a good job of showing off the most disgusting parts of the movie. 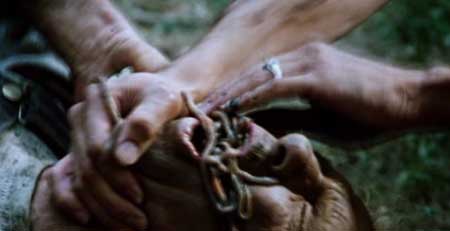 This scene is just sick. ‘Nuff said. I don’t want to give anything away if you haven’t seen it so go check it out and prepare to be grossed out.