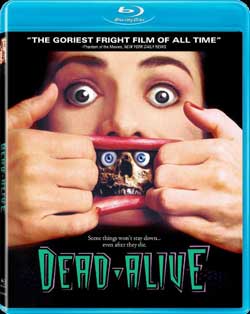 A young man’s mother is bitten by a Sumatran rat-monkey. She gets sick and dies, at which time she comes back to life, killing and eating dogs, nurses, friends, and neighbors.

Peter Jackson may be recognized for his mega opus “Lord of the Rings”, but it’s his early roots that most horror fans still remember well. Looking back to his roots, Jackson was pretty in tune with the horror market. The 80’s brought “Bad Taste”, while the 90’s brought in “The Frighteners” and “Dead Alive”. “Dead alive” was designed with every intention of gore exploitation to shock viewers in a way that is almost comical thru the most horrific on screen situations. We in fact wouldn’t get as messy until years later when the Asian market stepped in with their Tokyo Gore” releases. 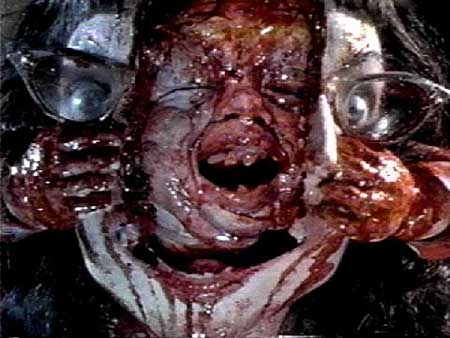 The famed Sumatran rat-monkey. Who ever heard of a monkey being infected that raises the dead? Well it’s a pretty silly idea that is even sillier when you see the claymation stop motion animatics play out of screen. I was instantly reminded of the “Evil Dead” ending. But the famed monkey is really only a small part of this horror massacre. 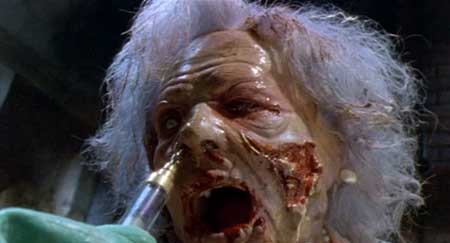 Timothy Balme plays the love interest Lionel Cosgrove who is thrown into a surreal reality he doesn’t know how to cope with. Paquita Maria Sanchez (Diana Peñalve) only complicates the situation when she develops a tarot card driven crush on Lionel. It’s a nice mix of sweet and nasty all rolled into one that never lets up. Paquita is bent on a love romance relationship while Lionel tries to balance her advances with the fact that grandma is a zombie. His methods for sedating the walking dead only seem to work momentarily enough for them to slow down their limb ripping attacks. The film is most noted for its extremely messy finale that involves Lionel carrying around a lawnmower like a chainsaw. 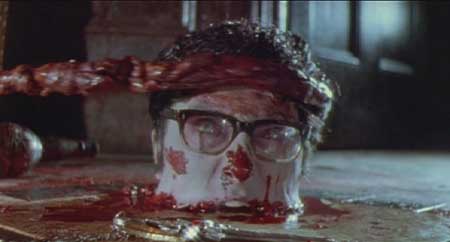 “Dead Alive” pretty much accomplishes the gross-out award hands down with out missing a beat. The gore and gross factor is so absurd and practical-effects driven that it quickly becomes a source of humor for disgusted onlookers. Peter Jackson really did his homework here with not only keeping every shot smattered with crudeness but carefully framed to allow for the effects to really shine to full capacity. There are several shots that drive right into the camera emphasizing progressed states of deterioration and infection. A simple shot like grandmas puss squirting into her soup or her ear falling off to join it sends a message bright and clear…..”your in for a ride of extremely gruesome. 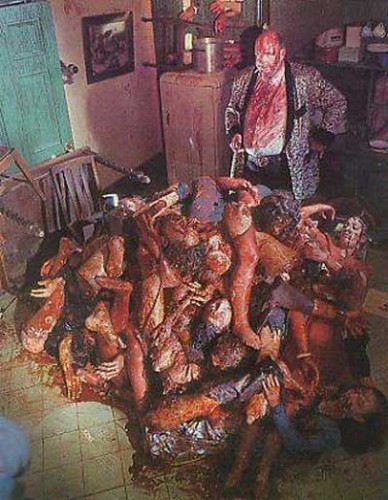 As “Dead Alive” evolves, so does the minute by minute gore. It’s bad enough that Lionel has to deal with a bunch of corpses in his basement, but when they are given an injection of animal stimulants instead of poison, they become super powered flesh tearing zombies from hell. The level of body abomination and slicing of limbs exceeds pretty much any film I’ve seen to date. In fact, as they begin in their hyped up stages, the creational mayhem FX the team pulls off is nothing short of maddening brilliance. Faces fly, bodies grind, blenders puree, hands gets yanked off and anything you can just about imagine. Though its the return of Vera that will top the charts here.

Now watching this film which came out way earlier than the slew of gory follow-ups, it’s very apparent that it provided a foundation for influence that has been copied and repeated in every thing from low budget Troma films to bigger budget films like “Drag me to Hell”. What stands out in this movie is the overabundance of latex driven gore gags which could easily be found in one of GWAR’s leftover bins. Jackson embraces this idea and does so with so much comfortably that it becomes an accepted trend in “Dead-Alive” without veering from its intention to impact. The amount of blood used and littered though out the house set must have been so massive it consumed much of the film budget alone. It was later reported that the actual movie blood was pumped in at 5 gallons per second with the finale coming in at a total of 300 liters of fake blood. 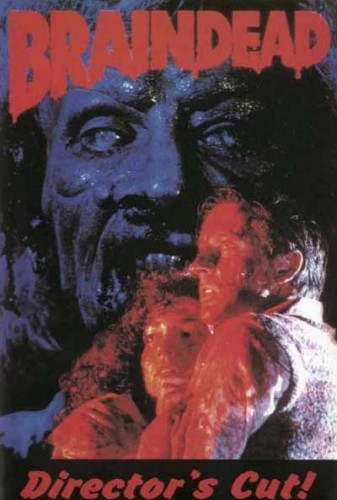 The movie was filed in New Zealand and has lived on to be “the” over the top cult classic. While it is noted at the bloodiest film of all time, it is easily overlooked due to its humorous nature. Horror fans can now enjoy this cult film in all its high definition glory with a Bluray release. King of the gore hound films….I think so!