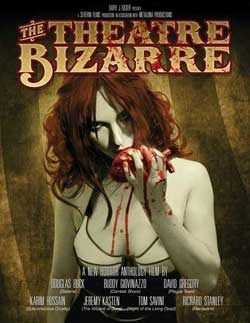 Down a seedy city street in her neighborhood, young Enola Penny is obsessed with what appears to be a long abandoned theatre. One night, she sees that the front door is slightly ajar and impulsively decides to sneak inside. But there in the dark, decrepit auditorium, a show unlike any other unfolds before her eyes. Its host is an eerie human puppet named Peg Poett who will introduce Penny to six tales of the bizarre: A couple traveling in a remote part of the French Pyrenees cross paths with a lustful witch; A paranoid lover faces the wrath of a partner who has been pushed to her limit; The Freudian dreams of an unfaithful husband blur the lines between fantasy and reality; The horrors of the real world are interpreted through the mind of a child; A woman addicted to other people’s memories gets her fix through the vitreous fluid of her victims’ eyeballs; And a perverse obsession with sweets turns sour for a couple in too deep. But as the stories unfold, something much stranger is happening to Enola. Something irreversible and horrific. Something that awaits its next audience in THE THEATRE BIZARRE

“The Theatre Bizarre” is a 2011 anthology project combining some of horror’s best directorial talents. It’s name and wraparound story reflect the days of vaudeville and small theatre performance.

A young lady by the name of Enola Penny (Virginia Newcomb) who seemingly is obsessed with sketching this eerie local across the street, takes things a bit further by paying a visit in person. She is taken aback as freaky mannequin-like performers edge their way across the stage to reveal a series of short film stories. 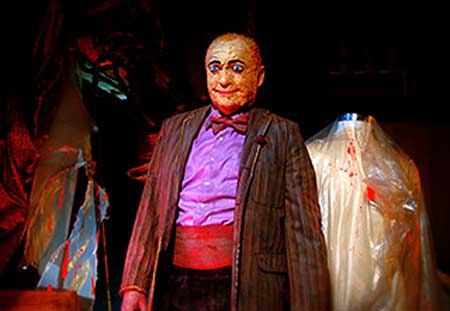 If the stories themselves don’t do the trick, then the wraparound performances by these jittery stage show puppets will. They remind me a bit of those creepy mannequins that appear in the film “The Cell” (akaThe mannequin showcase of murdered women inside Carl Stargher’s head)….ah the good ol days. Udo Kier as Peg Poett is presented like never before. With caked-on makeup, painted eyelids, and a jitter that will get under your skin, Poett introduces each piece. You might even expect some abomination of Marilyn Manson to come rolling out..but then again there is a show to unfold….and that’s the reason you arrived. 6 deadly tales of macabre, erotica, and infidelity.

Director Richard Stanley takes an esoteric direction with his take on the book Necronomicon. No Ash or Evil Dead in sight on this one, though there are alot of frogs to deal with. Necronomicon illustrates an even bigger frog entity that awaits. You might think that old ladies can’t be sexual until you get a load of this white hair dropping out a huge rack (of course she swaps out for a younger hotter vixen…but still…)…short but odd. 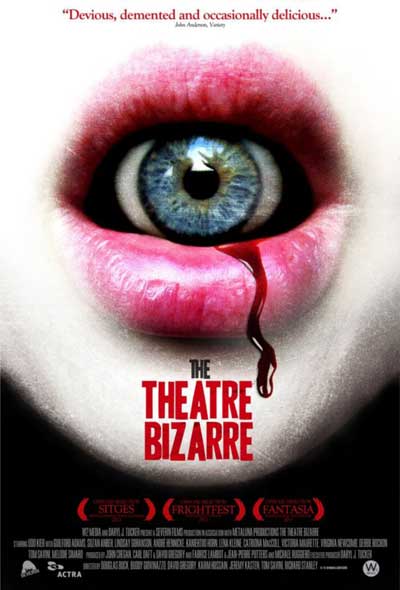 I loved Tom Savini’s “wet dream” piece that pays a slight tribute to the 1993 film “Boxing Helena“. Debbie Rochon is perfect in her role as the vindictive avenging house wife. For a moment, I actually “believed” she might do something like this. Note to self, never scorn Rochon…oouich!

“I Love You” centers on the break up of 2 former lovers, an unfaithful wife and her over-bearing husband. Lets say it ends badly.

In “Vision Stains”, a young girl finds that killing off homeless citizens who are close to death gives her the ability to share a sampling of their whole lives thru eyeball injections. Trouble comes when the girl decides to do the same to an unborn child (thru a pregnant girl’s stomach). 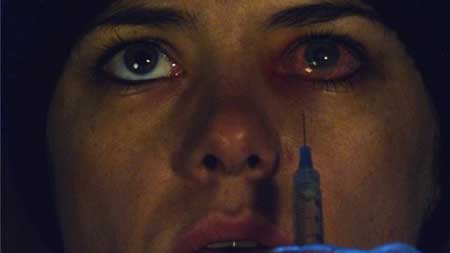 In yet another short, a relationship becomes troubled when the girl announces that she needs to distance herself. Apparently the 2 of them have built a fetish driven coming-together that involves the constant sharing of sweets and sugary items. Its one of the more gory of the bunch, but I won’t spoil the tasty surprise.

Each tale ranges in approach and premise laying a slightly different tone oozed from the mind of each director. There is plenty of nudity, violence, and obscurity to maintain the movie’s succession. I got the impression that the subject of infidelity and relationships were somewhat of a reoccurring theme, though this was not the basis for all.

The production on this looks good while also seasoning the viewer to a helping of horror treats. There is enough diversity here that viewers will most likely favor a couple over the next depending on personal preference. I was most joyed to hear of Richard Stanley making a contribution of whom hasn’t done much in recent years (Hardware, Dust Devil)

“The Theatre Bizarre” rocks its anthology ass with a tasty mix of horror tales. Each story keeps a sense of engagement leading into the next wrapped under this creepy before-mentioned seeding of freaky mannequin performance art.

The film is noted as being released by Severin Films, though upon checking, they have seemed to have disappeared into obscurity for the time being. In any case, “The Theatre Bizarre” is a must have addition for the horror shelves.