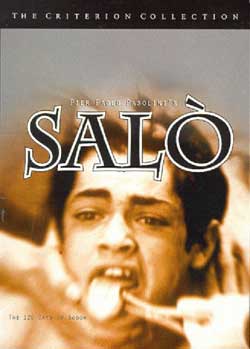 Salò o le 120 giornate di Sodoma (Salò or the 120 Days of Sodom), commonly referred to as Salò, is a controversial 1975 Italian film written and directed by Italian director Pier Paolo Pasolini with uncredited writing contributions by Pupi Avati. It is based on the book The 120 Days of Sodom by the Marquis de Sade. Because of its scenes depicting intensely graphic violence, sadism, and sexuality, the movie was extremely controversial upon its release, and remains banned in several countries to this day. It was Pasolini’s last film; he was murdered shortly before Salò was released.

The film focuses on four wealthy, corrupted fascist libertines in 1944 Nazi-controlled Italy who kidnap a total of eighteen teenage boys and girls and subject them to four months of extreme violence, sadism, sexual and mental torture before finally executing them one by one. The film is noted for exploring the themes of political corruption, abuse of power, sadism, perversion, sexuality, and fascism.

Although it remains a controversial film to this day, it has been praised by various film historians and critics, and while not typically considered a horror film, Salò was named the 65th scariest film ever made by the Chicago Film Critics Association in 2006.

Hell-o, Sickos. If you are reading this review because you have seen the film and just want to see what others think, I am about to tell you honestly. If you haven’t seen the film, be prepared for what you are about to digest, it’s pretty f*cking sick. I, myself was appalled when viewing the first half of this film as a virgin to what it throws in your face… That is saying something. Good or bad, I have no idea. I have seen others like it don’t get me wrong, but this is a bit out there, even for my taste. I love boundary breakers and for its time (and even still today), this obliterates all boundaries of cinema and good taste. With that being said, this is still something that I could not watch more than a few times. I’ve seen it twice and that’s about all I can stomach. Of course, I am referring to Salo/ The 120 Days of Sodom.

This film is not all that graphic, especially compared to some of the modern Horror that had surfaced these days. In fact, I would not even consider this a Horror movie. Nevertheless, it is still horrific all the same. It is based off of the novel by Marquis De Sade, which I hear is ten thousand times more f*cked up than this film. Could it even get much worse? Unlike the novel, the film takes place in nineteen forty four. The writer and Director, Pier Pasolini has a verbal introduction read by someone else in English to explain himself as far as the actions of the film are concerned. He claims to have stuck with the novel, except for changing one character and setting the time during the nineteen forties. As to what the rest of the dialog of the film, I have no f*cking clue. There are no subtitles in the version I viewed recently and the first time I viewed it was in two thousand three. I watched it with a double feature of Caligula (starring Malcom McDowell), and at first I got the two confused. I remember now. They are both just as disgusting and disturbing. This film is for the audience with an undying appetite for bad taste. It is effectively made and well done at that, just not something I could call myself a fan of. The violence was cool, but I’ll get to that later. First, I’ll take you step by step through this sick journey of a feature.

The film explains three circles during the verbally read introduction… The circle of manias, the circle of sh*t and the circle of blood. It is not the gore or the acts of humiliation that got to me here, but that it involved teenagers. With a film like this, I don’t see how anyone could bash M-S-P (or any other film for that matter) for “going too far.” I think Salo, even though it is not as graphically violent, goes much further… Especially for its time. Even still today. This is a hard film to rinse from your brain. Another reason why it is so hard for me personally to watch is all of the male genitalia shown throughout the film. There is just as much female nudity, but too much balls and sausage for me to handle. One set is more than enough and this has nine to be exact. Eighteen victims, nine female and nine male.

Each victim is humiliated, tortured and some even worse by the small group of adults which also cross dress while butt pounding one another. There are also adult women involved, but more as ornaments and providers of the soundtrack than participants. I’ll get the sickness out of the way, so I can move onto the good stuff, the violence of course. Other than pure depravity and humiliation, there is not much of a plot here. There is enough sh*t eating and piss drinking to make El Duce and G.G. Allin’s corpses have an erection in their graves. I’m sure this was on their top ten list of the best (probably p*rn) films of all time. One part showed piss drinking straight from the tap and into the open mouth below, G.G. Allin style. That is about the least sickening thing of the film. That should tell you something… Buckle up and beware. This is going to be one f*cked up ride.

There are other films that depict this level of depravity and even in a more graphic manner, yet the disturbance factor does not amount to this. The viewer is subjected to teenage children being forced to have sex. A young boy is ass rammed while another man is ass ramming the man that is ass ramming him. One boy is forced to strip and bend another over as a man checks his hole for sh*t tracks. The teenage men are forced to wear bridal dresses. One girl is forced to eat food stuffed with nails (that scene was cool for the most part. It was more along the lines of what I’m use to watching) Both sexes are put on leashes and forced to beg for a small snack. One victim is teased with an unloaded gun to the head. From there, it only gets sicker. I mean by the “sh*t” loads…

The teens are forced to sit around a table and enjoy a feast of feces as the adults do the same. They are forced to bathe in tubs of oozing sh*t. A huge bowl, filled to the brim with feces is the main course. Did someone say sh*t? Yes, this film is full of it, literally. This brings us to my personal favorite part (and believe it or not, the most subtle of the film), the circle of blood…

The Gore Score is not too high, but effective all the same. As many will say, it’s what you don’t see that is disturbing. Here, we see the beginning and basic gist of the full blown torture that is unfolding. The Special Effects are nicely done and very realistic.. The effects were skillfully provided by Alfredo Tiberi If we Italians know about one thing, it’s the usage of gore. Although Mario Bava, Dario Argento or even Lucio Fulci fail to show it in this light… or darkness. Their’s seem to be over gored. This film is not, which makes it all the more realistically disturbing.

There is an execution style shooting by multiple guns, followed by the immediate killing of another by one person. This is proceeded by a boy being watched through a window as he is outside getting a lighter held to his penis. After his painful burning, a female is shown the same pain infliction, but on her breasts. There is a brutal scalping as several hold a girl down and peel the top of her head clean off. This was my favorite effect of the film. One young man has his eye cut right out of the socket. It can be seen at the end of the blade as he screams in pain. I would have been as well. Another one of the boys are branded with a heated metal cattle brand. Some of the victims go from what seems like moods of enjoyment to painful agonizing torment.

The acting is very believable. The direction is nothing more than point and shoot. Nothing to get worked up over. Pier is no Dario Argento in that department. He just wanted something that was to the point and in your face. That, he accomplishes just fine. This film is absolutely an acquired taste for those who can stomach the savagery as it is forced down your throat. Watch at your own risk. Again, this is a warning. All in all, I think the film was well done as far as what it was going for, but as I mentioned before, not really my thing. I’m more along the lines of brutal Horror. This is somewhat beyond or not in the same realm. Just by me saying this, please do not think it lacks horrific qualities all the same. It does not. It is without a doubt one to disturb the most hardened Horror fan, such as myself, even with its lack of the genre. I love the rape/ revenge genre, because there is the redeeming factor of revenge at the end.

This film is absent of the revenge and goes far beyond rape. This is a film that stands on its own, or maybe beside Caligula. With film makers such as Lucifer Valentine that are out for shock value and sickness, he does not hold a candle to this. Then again, who is to blame (or in some eyes, reward)… the film adapter, or he who wrote the book? I give this film, Salo or The 120 days of Sodom (for the effort and for making even me sick) TWO HORNS UP.