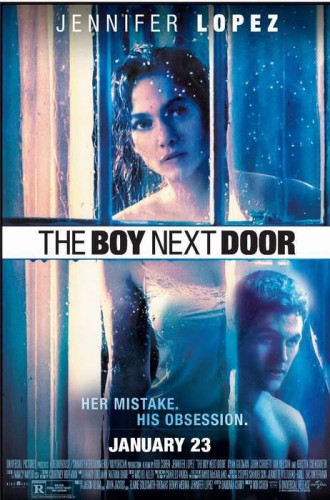 SYNOPSIS:
A newly divorced woman falls for a younger man who has recently moved in across the street from her, but their torrid affair soon takes a dangerous turn.

REVIEW:
There are bad movies, then there are BAD movies. Rob Cohen’s The Boy Next Door is a miserable failure. The film is destined to elicit roars of laughter where none are intended. It is filled with painful, dreadful dialog, droll acting and predictable plot twists and turns. The film sets up Jennifer Lopez as a single mother and high school literature teacher struggling to raise her kid and keep her composure while dealing with the decision to divorce her cheating husband whom she is now separated or believe his claims he has changed in order to take him back. When hunky 19 year old Noah (Ryan Guzman) moves in next door, she falls to her own desires and loneliness. After a night of misguided passion, she finds herself being stalked by the young man, not the type of “danger” she was looking for. Cohen works hard to bring his audience a modern twist on Fatal Attraction or Basic Instinct. The film’s plot is riddled with issues of conflicting ideas and morals finding itself buried by its own plot devices. The Boy Next Door toys with the sexual innuendos for a brief period mid-film providing some rare authentic chuckles and giggles but once it realizes the true dilemma it has placed its lead into, the film trades the campy elements for unintentional laughs as it spins out of control. The film is an early contender for worst of the year. 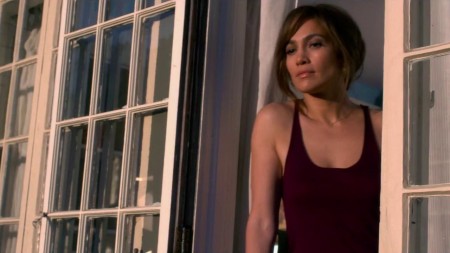 The plot is mind numbingly simple: a struggling single mother in a highly respected position makes a mistake, succumbing to the sexual advances from someone who fills her repressed desires and embodies an exciting air of danger. Jennifer Lopez is Clair Peterson who has the inappropriate tryst with young Noah (Ryan Guzman), the boy next door. When Clair rejects Noah the next morning exclaiming it all to be a horrible mistake, Noah begins to spiral into a homicidal maniac. He twists everything out of context, places Claire’s home life and professional career in jeopardy, turns her own son against her and, finally, become physical placing everyone around her in her assailant’s cross-hairs. 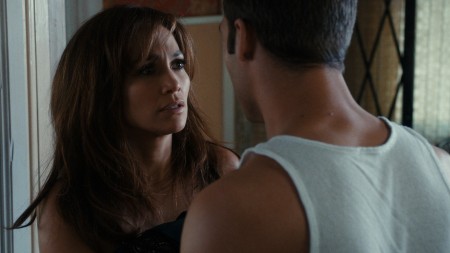 The film attempts to avoid the moral issues of a teacher hooking up with a student by making Noah a 19 year old student with a troubled past trying to complete his final year of high school. He is no longer under age. But, this does not entirely remove the context the relationship implies, despite Ryan Guzman never, ever coming across anywhere near 19 years old. Sorry, not in the slightest. But, that’s never stopped films before. Whatever. The script often feels like it wants to address the teacher/student thing head on but never truly does. It is there, he is in her class and the threat of his revealing the affair is a card well played; however, Claire has an ace in the hole, her best friend is the high school vice principal. So, when “coming clean” is finally addressed, the film cops out by having the authority figure in the film being entirely sympathetic to the situation. Bah. The script has its most fun with the situation at home when Noah continues to insert himself into the broken family dynamic which includes clever, for this type of film, sexual innuendos and awkward moments with flirtations when the family is only yards away. But that is short lived. 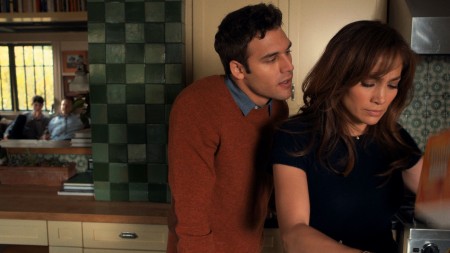 By the end of the movie, it has degenerated into a killer on the loose film with Noah offing anyone in his path leaving Claire, her son Kevin (Ian Nelson) and her estranged husband Garrett (John Corbett) fighting for the lives. It becomes a slasher film even to the point of sliding in some gruesome gore effects – especially an entertaining, for all the wrong reasons, eye gouging effect. The trouble is that everything by this point is predictable and cliche. Claire calling her friend’s phone to warn about Noah only to hear Noah on the other line. Obvious misdirections where Noah is supposed to be in one place only to be in another. Suddenly discovering everyone you care for tied up in a single location. The dialog is “Mystery Science Theater” bad too delivered without authenticity or emotion. The opening credits sequence cuts establishing the Peterson household are presented in a jarring exposition-like manner with Corbett’s dialog laughably off set. In this respect, The Boy Next Door is a disaster. 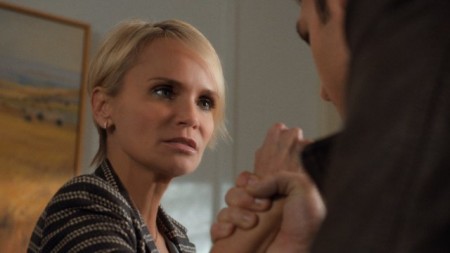 The film is full of problems. The script from screenwriter Barbara Curry never takes the audience somewhere new or unexpected nor does it provide any unique or interesting characters. The direction from Rob Cohen is dull and lifeless which is odd coming from the talent who started the Fast And Furious films. Cohen never gets much out of his cast either even though Kristen Chenoweth marvelously chews the scenery as Vicky Lansing, the vice principle, especially in a scene where she encounters Noah asserting her authority. Jennifer Lopez is wasted here, she is intended to bring a female version of Nick Curran or Dan Gallagher, but she is no Michael Douglas. Part of the problem is that her character is weak and the script never takes advantage of realistically presenting her “bad” side – the side that would fall victim to Noah’s advances or, better yet, take advantage of them. Ryan Guzman eases into the charm factor of his character playing the boy-toy to full tilt; but, when it comes to the darker turns the character needs, he falls flat. Guzman is never convincing at the troubled teen or the raging maniac. Admittedly there is a reasonable amount of chemistry between the Lopez and Guzman. But it is as weak as the film’s script. 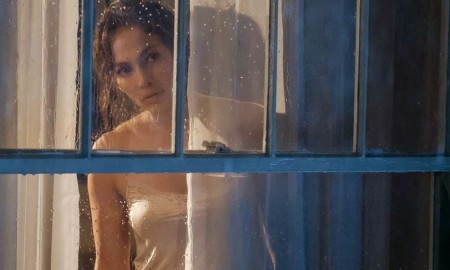