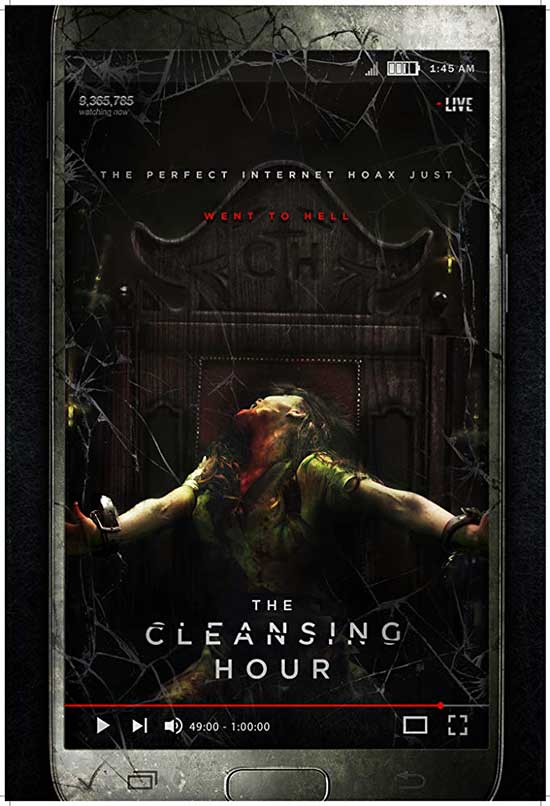 Another successful “exorcism” streamed online – or so it seems. Can the “exorcist”, producer and their team bring the ratings up? Ratings skyrocket, when a real demon gets involved.

Here we have a film that is a behind the scenes look at fake exorcism. The young “father” with a hot internet show attracts more than just the possessed people. In a sentence I would rate it this way: Predictable priest of the rock star variety gets a bland taste of his own medicine.

Exorcism movies are are mixed bag in horror. While some are repulsed and scared, others remain skeptical and indifferent. For my adult watching years I have been more the latter. That might be why I wasn’t thrilled with the premise here. But this film had what it takes to keep my interest, if not scare me just a little.

On the set every night there is an exorcism. We are let in n the bluff quite early as we see the cue card holder and the smoke machines. It’s pretty clear what is happening but altogether impossible to believe it. I will note here at the get go they got an Abercrombie model type for the main role. The Father is hot and for that reason, many will be pleased. His partner is also well cast. Together they remind me of Knoxville and Steve-O from the “Jackass” franchise. The priest’s partner/manager Drew must appease Father Max’s ego and alcoholic escapades.

I found the subtitle machines and computer engineering station highly interesting in the sci fi sense. I got the humor there as well showing how easy it might be to fool droves with the equipment. But this isn’t a church-folk audience so I had problems believing it would be this successful to be accepted.

When Drew’s girlfriend is asked to sub for a no show actor on the exorcism spot, all hell breaks loose. We aren’t meant to see it’s fake until later. When the fake blood isn’t needed because there is enough of the real stuff, the set gets taken over by hell and that’s the high tension area of the movie. And THEN of couse, there’s the fire.

Max ends up getting his coveted million followers and his viewership explodes as a result of this actual demon. What kind of director creates such a film? Let’s take a look. Damien LeVeck has 3 directing credits to his name. None are world class but he has spent a lot of time behind the camera in other ways. It can be said this film is dark and atmospheric. In my view, that s a strength. Perhaps more attention to characterization would have helped this film seem more real. He has an excellent female acting in this. Drew’s girlfriend is the scariest thing here and she goes into the regular character flawlessly. She is played by Alix Angelis and appears to have the most pro work under her belt. I hope to see more of her in horror.

The acting is good but even the best acting can’t save a flawed premise. For me, this one just wasn’t believable and so it lost a few points for that. Hoprror fans will enjoy the blood and effects but ac far as the scares go, they aren’t. Because of this I would have liked more humor, though there is some.

In conclusion, “The Cleansing Hour” is a small screen enjoyment for horror films as well as fans of the possession genre. I might warn those in the latter group there is nothing truthful or austere in this story. It is meant to poke fun at social media and shock television. I thought it wasn’t credible enough but I did enjoy it most of the way through. I give it a rating of 5/10.