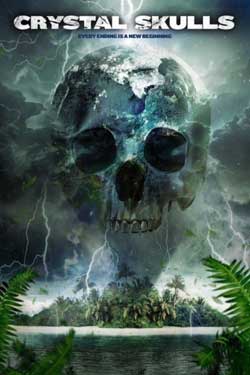 It is 2020 and the apocalypse is inevitable. 12 of 13 Crystal skulls are united causing catastrophic events. Only the 13th Skull can theoretically restore order before the Earth is destroyed from within by their power.

I’m going to break it to you right now – depending on where you look, the synopsis of this film is nothing like what actually happens. There are a few floating around online, and they all vary slightly. Some of them even make the film sound good! But if those are what prompts you to watch Crystal Skulls, then you should prepare to be disappointed. It’s all downhill from here.

So, with that out of the way, I’ll do my best to summarise it. The plot goes like this: it’s the year 2020 (apparently) and a millionaire named William S. Hadden (David Rintoul) has, for some unexplained reason, united twelve of the thirteen crystal skulls for the first time in the history of humankind. Exactly why Hadden chose to unite the skulls without knowing the consequences is beyond me – but without him, there’d be no film, so we’ll let it slide. 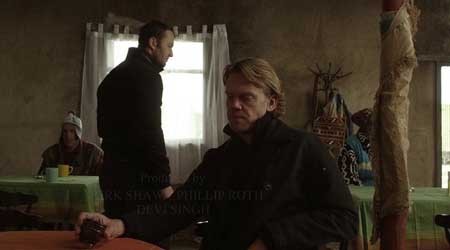 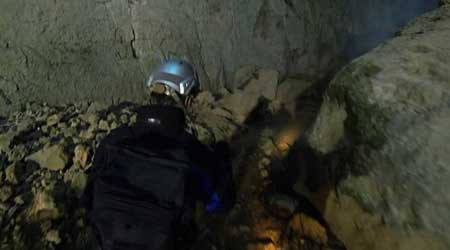 Anyway, he sends one of his employees, Mitchell (Sam Redford), a hard-faced Cockney bloke, to retrieve what he believes to be the thirteenth skull. However, unsurprisingly, it turns out to be a fake, and the twelve remaining skulls begin to cause chaos, vaporising two unfortunate lab workers in the process. Without the genuine thirteenth skull, the other twelve generate a dangerous electromagnetic pulse, causing a huge storm and shutting down most of Western Europe.

Meanwhile, two brothers, John (Richard Burgi) and Terry Winston (Matt Rippy), are exploring some underground ruins in Sweden. It’s revealed that these ruins are the last place their father visited before his mysterious death, and they’re looking for answers. The resulting electromagnetic pulse from the skulls opens up a secret passage within the ruins. 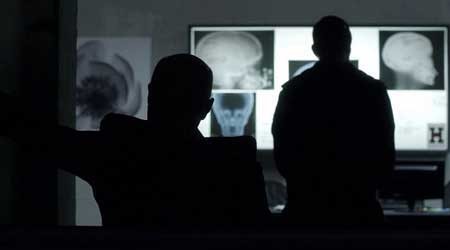 Once inside, the brothers discover that whatever artefact was hidden away there has long since been moved, and only a pile of rocks remain in its place on the pedestal. However, among the rubble, John discovers his father’s ring (which looks like something straight out of a cereal box). Presumably because he’s a complete moron, Terry decides to pick up one of the rocks, setting off an Indiana Jones style booby trap which anyone with half a brain could see coming from a mile off. They escape into the cave outside as the ruins begin to collapse around them, only to find that their equipment has been damaged by the cave-in. Ever the tragic hero, Terry remains behind while John ascends the mountain just in time to see the entire cave collapse, sealing his brother’s fate.

After the funeral, John returns to his job as a college professor, only to find out that his classes have been cancelled. The college, rather inconsiderately, have done so in order to give him time to properly mourn the loss of his brother. How rude. As he’s drowning his sorrows in a bar in Connecticut, he’s approached by Hadden’s daughter, Sienna Mallory (Wendy Glenn), along with Mitchell, who inform him that Hadden wishes to speak to him about a book which he’s published regarding the crystal skulls – it’s revealed that both he and his father have devoted their lives to the ‘theory’ of the skulls. He agrees and together they set out for Vienna, Austria, the location of Hadden’s headquarters. They’re not alone, naturally; they’re pursued by an unnamed terrorist organisation whose goal is to stop them from retrieving the thirteenth skull at all costs. 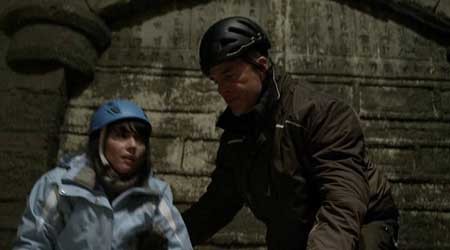 While this is happening, the military, having discovered the source of the electromagnetic pulse, move to take over the very same building. They attempt to destroy the skulls, to no avail, causing yet another pulse. The storm above Europe continues to grow, forming a vortex. As they’re flying over a mountain range, the military chopper containing John, Mitchell and Sienna loses power and, in spite of their best attempts to MacGyver their way out of the situation, they crash down in the middle of nowhere. They emerge, unscathed, before the helicopter explodes into a ball of flame.

By some miracle, the military are able to retrieve the group from the forest where they crashed in no time at all. How they managed this is never explained – we can only assume that, with it being 2020, technology has advanced leaps and bounds (the intelligence of the general populous, though – not so much). Finally, almost fifty minutes into the film, we find out exactly why Hadden has collected the skulls: he has cancer, and for whatever reason believes that they can help him.

Once again, Hadden sends John and Sienna out in a helicopter (you’d think they’d have learned after the first time) to find the location of the thirteenth skull. Despite a complete lack of chemistry on screen, they suddenly have the hots for one another (perhaps now that he realises her daddy is rich). They return to the aforementioned ruins in Sweden, though the whole place is looking suspiciously rubble-free, considering the recent cave-in. There’s even a nice little path for them to walk along. 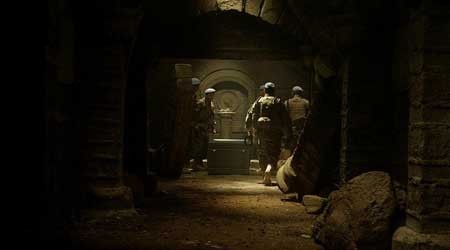 Meanwhile, at Hadden’s headquarters, he drops the little bombshell that the electromagnetic field generated by the crystal skulls will, if unchecked, tear the Earth to pieces in little more than a day. In typical military fashion, Colonel Bailey (J.R. Esposito) threatens to use nuclear weapons on Hadden’s headquarters if the final skull can’t be found. A reasonable course of action.

Back at the cave, John and Sienna’s search has been unsuccessful. As they’re about to return to the helicopter, a member of the terrorist group shoots it down with a missile, leaving them stranded. As they’re trekking through the nearby forest, they come across Mitchell, who has been sent to help them by Hadden himself. While they’re hiding from the terrorists, tensions among the group rise, but they’re somehow able to figure out the location of the thirteenth skull using some of John’s father’s notes. It turns out to be the Visočica hill, referred to as the ‘Sun Pyramid’ in the film.

However, when they arrive, they’re captured by terrorists. They believe, because Hadden was foolish enough to unite the twelve crystal skulls in the first place, that he deserves to bring about the end of the world. It’s man’s destiny. As one of the terrorists, Hussein (Velislav Pavlov), is about to execute John, one of the hooded figures reveals himself – surprise, it’s John’s father, John Sr. (Hugh Fraser), who wasn’t so dead after all. He believes that it was his destiny to join the ‘brotherhood’ (as he calls it) and protect the thirteenth skull.

Having been reunited with his son, it doesn’t take long for John Sr. to turn on his ‘brothers’, delivering Hussein a knife to the gut. John Sr. escapes along with the others, and they finally obtain the thirteenth skull. Of course, the pyramid begins to collapse around them, and John’s father insists that he stays. However, it doesn’t take much to convince him otherwise. Conveniently, he pauses just long enough for a wounded Hussein to shoot him in the chest. Hussein is immediately killed by Mitchell, and John Sr. dies in a rather pathetic fashion before being abandoned inside the ruins. Magical. 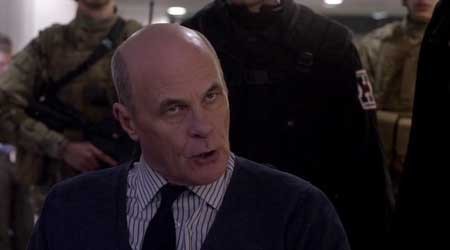 Just as the military are about to detonate a nuclear weapon at the site of the crystal skulls, the trio arrive back in Vienna just in time. Again, we can only imagine that people are able to travel at lightning speeds in the year 2020. I took a minute to look it up, and travelling from Sarajevo, the capital of Bosnia and Herzegovina, to Vienna, Austria would take an hour and twenty minutes by plane, or a whopping eight hours by car, yet it seems that they were able to make the journey in the blink of an eye. I too look forward to being able to zoom around the world in the near future.

So, John suits up and places the thirteenth skull along with the others. The storm vortex, which has been growing exponentially throughout the film, suddenly disappears, and everyone is cool with that for some reason. Hadden dies suddenly, having both brought about and prevented the end of the world in a matter of days, and his body is sealed, along with the thirteenth crystal skull, in some ruins (it’s not specified whether they’re in Sweden or the Sun Pyramid – conveniently, they look exactly alike from the inside). And that’s the end.

Or is it? For some reason, the knuckleheads behind Crystal Skulls decided it would be really great to throw in a clip of William Hadden waking up inside his tomb at the very last second. Let’s just hope that any television executive who’s unfortunate enough to be pitched the idea for a sequel has the good sense to say no. 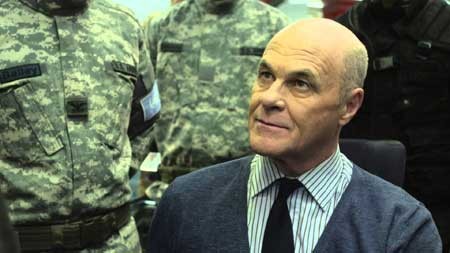 I can’t get my head around this film. The ending left me wondering whether I had totally misunderstood the premise that the film attempted to hammer home throughout. If the thirteenth skull is the only thing that can control the electromagnetic energy being generated by the other twelve, then why would you separate it from them at the end of the film? After all the effort they went to in order to retrieve it, you’d think it would be entirely necessary for the skulls to remain together in order to prevent the end of the universe. Given all of the daft nonsense they spouted throughout the film, it seems stupid to have removed one of the skulls to be buried with Hadden. Plus, if Hadden believed that the skulls would cure him, why did he die in the first place? Couldn’t the skulls have gotten rid of his cancer before he kicked the bucket? Who knows? The number of plot holes in Crystal Skulls is making my brain hurt.

The film wasn’t all doom and gloom, as hard as that may be to believe. There were some unintentionally funny moments – a supposedly serious funeral scene was let down by some really bad acting, and the on-screen ‘romance’ between John and Sienna was completely out of the blue, not to mention laughably awkward. I was quite amused to find out that there’s only an eight year difference in age between Hugh Fraser and Richard Burgi, who play a father and son on screen. (He must have started young.) There’s a lot of pseudo-science and meaningless jargon throughout, which leads me to believe that the writers, Denyc (a pseudonym, I guess?) and Rafael Jordan did little to no research before diving headfirst into this hot mess.

I love a film that’s ‘so bad, it’s good’. But Crystal Skulls is beyond all that. I’ve watched it two or three times now because it’s just… I don’t know. They were obviously going for something serious, but it was a complete flop, even for a television movie. The acting was, for the most part, terrible, and the special effects were just as bad.

Unless you’re a glutton for punishment, give this one a wide berth.