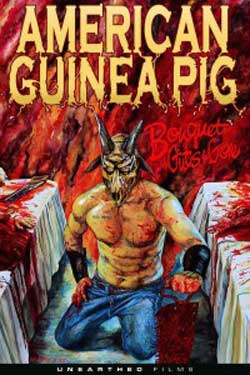 If you’re reading this review, you’re no doubt already familiar with the legendary Guinea Pig films from Japan. If not, long story short, they’re a group of hardcore gore films from Japan, made in the 1980’s, definitely not for the squeamish, that pretty set new standards for how disturbing and depraved a horror film can be. The story of Charlie Sheen contacting the FBI regarding watching a snuff film is synonymous with these classics. They were distributed by Unearthed Films, a film company known for being one of the kings of disturbing cinema (they’ve also released films like Red Room, Slaughtered Vomit Dolls, The Coma-Brutal Duel, and a couple of Ryan Nicholson’s most recent films). To make this story go full circle (and to finally get to the review at hand), it’s only fitting that president of Unearthed Films, Stephen Biro, make his directorial debut with a very brave effort, American Guinea Pig: Bouquet of Guts and Gore.

But he’s not alone. Biro, who obviously knows a thing or two about the disturbing, teamed up with James Vanbebber (Deadbeat at Dawn) and special effects master Marcus Koch (see his work in everything from 100 Tears to Rot to Circus of the Dead) to try and bring all of you sick and twisted extreme horror fans something special. Do they succeed? Let my review here add to the collective “Yes!” 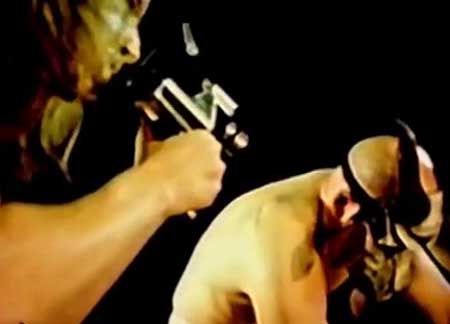 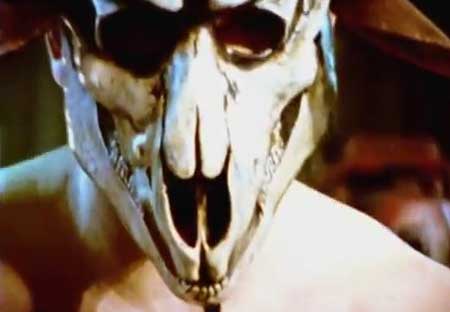 Start with two girls (Amy, played by Caitlyn Dailey, and Erika, played by Ashley Lynn Caputo from Amerikan Holokaust and Naughty, Dirty, Nasty) being followed by someone the we don’t see. They reach their car and get in, and then a guy appears in the backseat with a gasmask on and unleashes some kind of smoke/gas combo that knocks them out, and he drives them away. And it’s at this point that we get a version of the title screen from the original Guinea Pig films, but reworked to show this as the American edition. I imagine at this point, had I watched this in a theater with a bunch of like-minded sickos, there would have been a minor eruption of applause. But slow down, fellow viewers, as those nostalgic butterflies floating in your stomach will soon be coated in bile and working their way up your throat.

To say this is disturbing is an understatement. Let me paint you a picture: two women and chained down to tables by their throats. A long table covered with an assortment of tools, weapons, drugs, and video equipment is at their feet. Four men wearing masks circle the tables, three of them with cameras, the fourth, the one known as ‘The Actor,” a hulking beast with a Baphomet mask on (played by Eight the Chosen One). While the others keep the cameras rolling, The Actor’s job is simple: carve the women up into pieces amidst a barrage of The Director’s (Scott Gabbey) instructions (lines like “do it slower, make me hard” and a constant and impatient demand to “start on the left, never on the right” are the closest to the very darkest of humor you’ll find here). And that is exactly what you get for the next hour +. 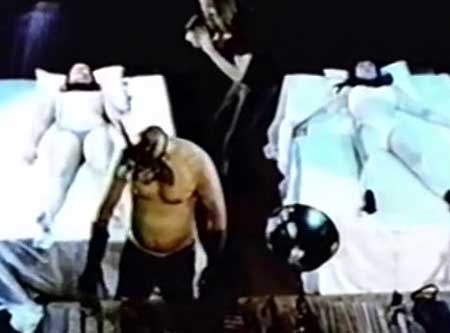 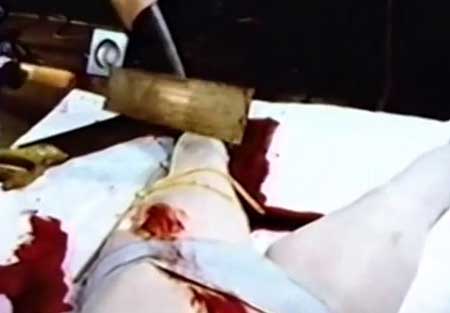 There are some very well made effects in American Guinea Pig: Bouquet of Guts and Gore, with a couple parts that made even this jaded reviewer either look a little closer to make sure it wasn’t real or, during a certain scene involving an eye, watch through a gap between my fingers (eyes do it to me every single time). I’d compare the work to the original Flower of Flesh and Blood as well as to Niku Daruma, but with updated effects, new twists, and what, to me, seems like a more sinister storyline. The women are butchered one by one (starting at the left, of course), with the help of a drug that numbs them and a few drops of LSD that takes their minds elsewhere. Limbs are severed, bones cracked and crunched, flesh torn from muscle, teeth broken out. About one third of the way through, we find out that one of the cameraman, the one referred to as “VHS” (played by David Hood), is not there of his own free will, but The Director reminds him that they have his children.

As I said, the gore in American Guinea Pig: Bouquet of Guts and Gore is extreme and constant; as soon as the first cut is made, we’re not leaving the room until we’re finished with not one, but two victims. And personally, I don’t even think that’s the horrifying part. What’s more horrifying is the idea of what they’re doing, and why they’re doing it, as we get little bits of info here and there, as well as a little bit of behind the scenes at the end (which is where “The Editor,” played by James Vanbebber, makes his appearance). Well, and of course, there’s the hint of something far worse just after that, but that’s for you to find out for yourself. 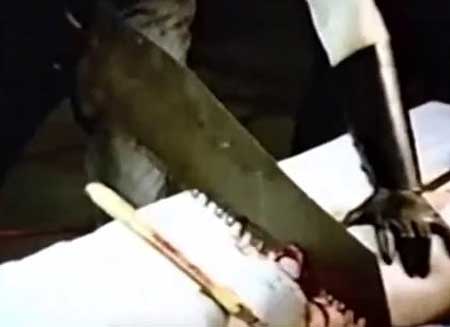 I’ve been reading a lot about this movie for some time now. It’s had a lot of hype surrounding it, and a lot of early reviews have been very favorable. So I went into it with an open mind, but knowing it had a lot to live up to, not only in current hype, but also in tradition (see previous Guinea Pig films). To Stephen Biro, cast, and crew, congratulations. You lived up to all expectations, and even surpassed some by creating something so sick and twisted, so respectful to the past, while also still breaking some new ground. At the same time, you’ve also set a bar of your own: there were multiple films within the original Guinea Pig collection. I’ll be anxiously awaiting the next American chapter. Twisted as all Hell!