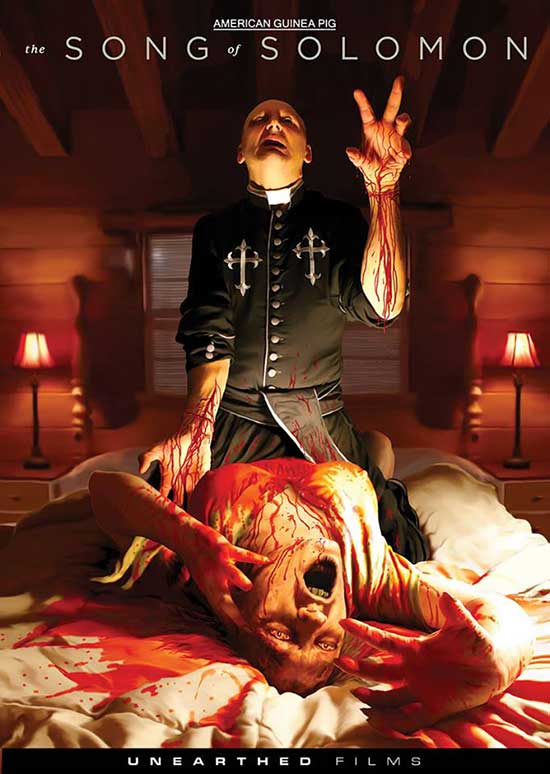 The Catholic Church is trying to save an innocent soul from the ravages of satanic possession. Wave after wave of holy men are sent to confront the possessed.

The third in the American Guinea Pig series, AGP: The Song of Solomon sees the return of Stephen Biro in the role of writer and director (head of Unearthed Films, he also wrote/directed AGP: Bouquet of Guts and Gore and wrote AGP: Bloodshock). With the Guinea Pig films, whether we’re talking the Japanese or American series, a major draw is the blood and guts and gore, the makeup and special effects, so right alongside Biro come two of the modern-day masters: Marcus Koch of Oddtopsy FX (see his work in Rot, Circus of the Dead, and We Are Still Here) and Jerami Cruise of Toetag EFX (see Tales of Halloween, Murder-Set-Pieces, and, oh yeah, August Underground’s Penance and Mordum). Add in an exorcism theme and it’s no wonder there has been such a buzz around this film ever since it was announced, which in turn has given it some pretty high expectations to live up to. 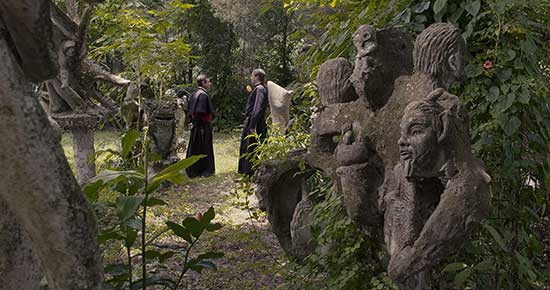 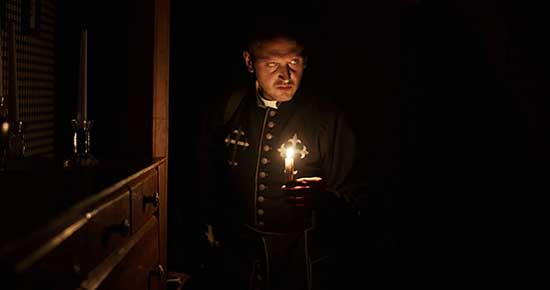 The story seems simple at first, the classic possession/exorcism tale, but it quickly becomes obvious that this is a very detailed and obviously well-researched plot. We open in Mary’s room (filmmaker and actress Jessica Cameron; Truth or Dare, Mania, The Sleeper); her father is pleading with her, asking why she is telling people that he molested her, a very strong accusation with no truth behind it. As he begs and cries, Mary seems to relish the psychological torture she’s inflicting on him. She likes it even more when he cuts his own throat open, then reaches inside and pulls his tongue out through the new slit. Mary tells her screaming mother that he did this for what is to come, and as the title hits the screen, the audience can only begin to imagine, based on the first few minutes, the nightmares that are in store for them.

Biro’s latest gorefest focuses on the various experts who attempt to help Mary…and the horror that befalls them. The family therapist, Dr. Richardson (Scott Alan Warner), is quickly spooked by Mary’s stories of dreams of fire and hell and suggests calling someone else, perhaps a man of the cloth. And so we meet the holy men tasked with what a mysterious, behind-the-scenes figure known as The Ordinary (Andy Winton) proclaims to be the most important exorcism ever. Father Blake (Deadbeat at Dawn himself, Jim Van Bebber) and Father Lawson (Scott Gabbey; see also Gewdner’s Pazucus: Island of Vomit and Despair and AGP: Bouquet of Guts and Gore) are sent in first. Next up, Father Corbin (Gene Palubicki, who in addition to his role also put together some of the music for the film; see also AGP: Bloodshock), a priest who had walked away after an exorcism went wrong. Finally, there’s Father Powell (David E. McMahon; Bonehill Road), a priest who lost his last exorcism, along with which he ended up losing his own soul. 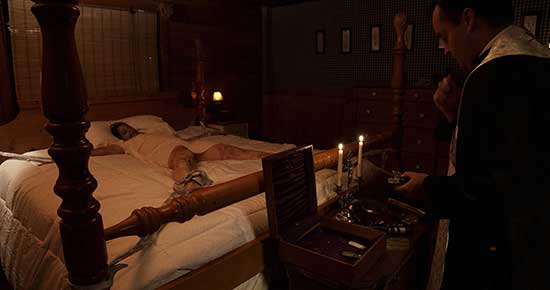 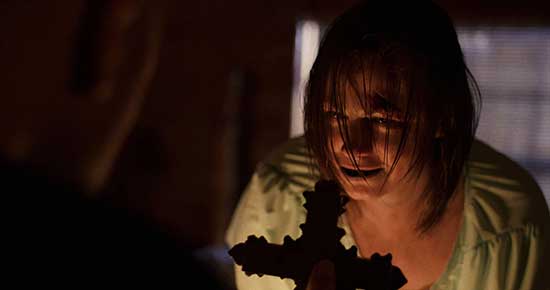 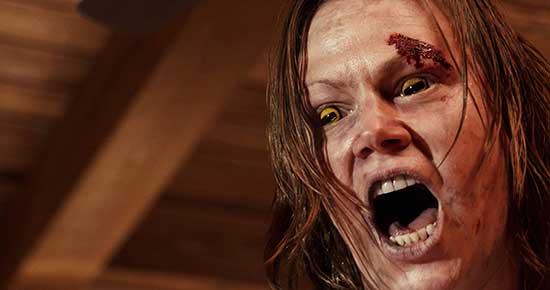 AGP: The Song of Solomon is probably the most plot-heavy of all of the Guinea Pig films, delving deep into Catholicism and religious rites in order to present a very detailed exorcism story. There is talk of the Golden Bible of Antioch, the Rosary of Death, which is said to be made from the bones of saints, and the Key of Solomon, among other things. The rites and rituals performed by the priests as they attempt to save Mary are based on the actual rites taught by the Vatican. These things will no doubt be of some interest to a portion of the audience. But this is Guinea Pig film, so right along with the twists and turns and intricacies of the plot is an absolute onslaught of blood and gore. Tongues are torn through throats, arms and legs are broken, some faces are ripped off while others melt away, and there’s even a Fulci/City of the Living Dead moment of internal organs coming up and out through the mouth. And thanks to the mastery of Koch and Cruise and their teams, it’s all enough to make you a little queasy. 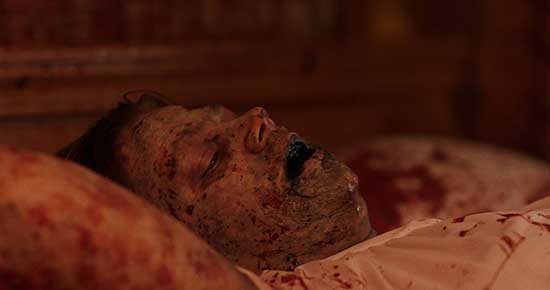 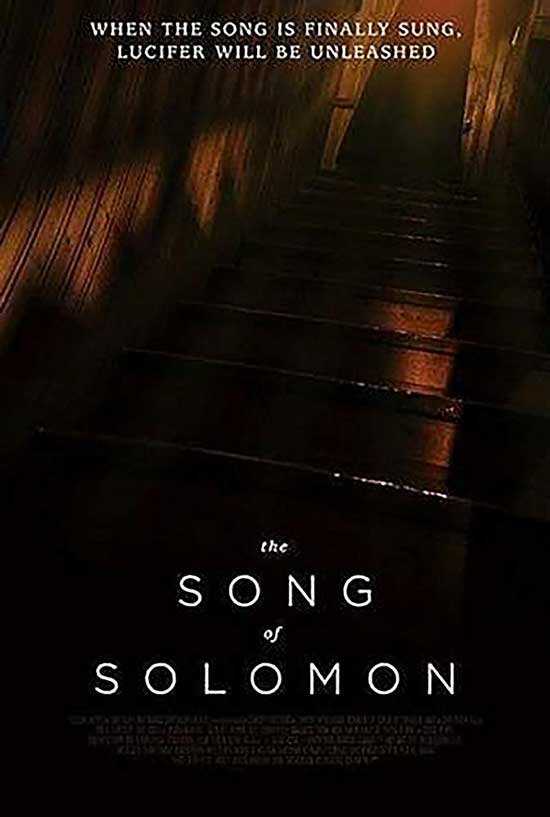 American Guinea Pig: The Song of Solomon isn’t a perfect film. At times it feels a bit long – although an argument could also be made that each and every scene is integral to move the story toward its shocking conclusion – and some of the acting is a bit rough. But at the same time, the gore effects are really well done, and the film brings a new depth to the Guinea Pig franchise. Jessica Cameron plays “crazy” well, channeling both sweetheart and evil demon whenever necessary, sometimes rapidly back and forth between the two. And it is very clear that this movie was a labor of love, a film that, based on some of Stephen Biro’s past writing, has no doubt been in the making for quite some time. This is a must see for any Guinea Pig fan as well as any horror fans who aren’t afraid to learn something new while their thirst for gore is being quenched.

American Guinea Pig: The Song of Solomon – bluray is available at Unearthed Films

Song of Solomon is available for purchase at MVD