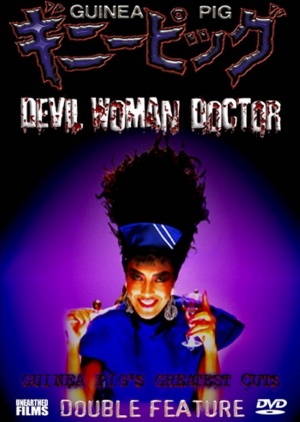 A mad doctor displays a selection of her more gruesome case studies. Starting with one family whose heads explode if they get angry and a woman whose heart explodes if she’s surprised, the doctor then presents us with a man whose right half wants to kill his left. Other subjects put on display are the effects of going to a sauna if you’re a man who sweats blood, the possibilities of romance between woman and zombie, and a game of one- upmanship between hospital patients.

The Guinea Pig series is widely known as one of the more grisly, upsetting, intense displays of blood and gore around. The series is highlighted by Devil’s Experiment and Flower of Flesh and Blood, two movies that could easily be mistaken for snuff films if you’re not paying attention. Mermaid in a Manhole, He Never Dies, and Android of Notre Dame continue the tradition, adding in bizarre, twisted stories to the extreme gore content. And then there’s Devil Doctor Woman. The fourth of the series, this film was directed by Hajime Tabe (the only other film he’s been a part of is Star Virgin as a co-writer, a quirky, straight to video sci-fi film from 1988) and written by Tabe and Satoru Ogura (see also Devil’s Experiment). And while this might not be a very popular opinion – in fact, I know it isn’t – I have to say that Devil Doctor Woman is an amazing experience. 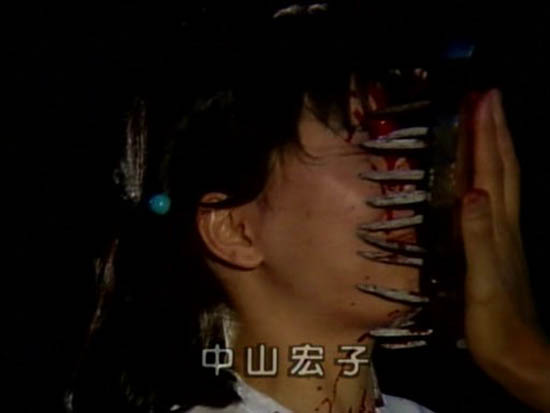 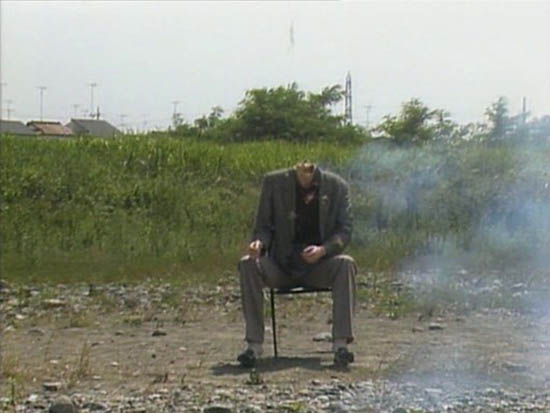 The film opens with a woman (who appears to be a man in drag) cutting a baby doll open, blood spraying out like a geyser. She quickly explains that she is an underground doctor, one who treats the more abnormal maladies. If this one already feels a little different than the other Guinea Pig films, there’s a reason for that. Guinea Pig 4: Devil Doctor Woman is absolutely hilarious. It is very rare that someone calls Devil’s Experiment “hilarious,” and when someone does, well, maybe keep your distance from them. But this one takes a dramatically different tone right from the beginning and sticks with it. This doesn’t mean that the gore is diminished, but it is different and, at times, completely ridiculous.

The first patients we meet are a family of four. According to the doctor, they all suffer from a rare disease that affects their brains: when they become too irritated, their brains explode. Luckily, they have been going through treatment, and the doctor is testing how well they have responded. She begins insulting them, and very quickly, one by one, their brains explode. By the time she scares a woman who suffers from a similar sickness, but one affecting her heart, and the patient’s chest explodes, we’ve already figured out she’s not a very good doctor. Things only get crazier from here. 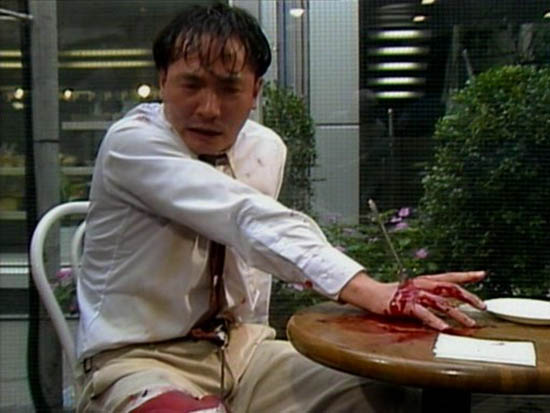 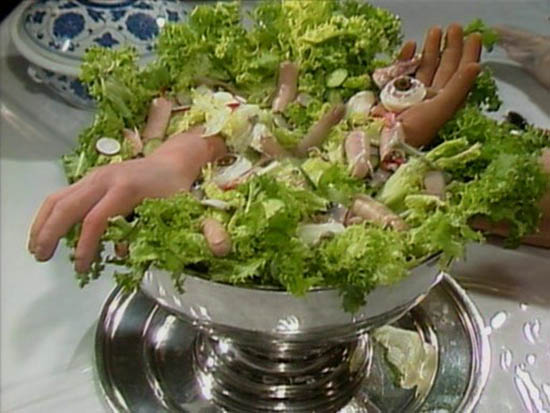 Devil Doctor Woman continues forward with a handful of mostly unrelated scenes (aside from the doctor’s presence, of course) showing a variety of bizarre, bloody, and batsh*t crazy events. We meet a man who suffers from a Jekyll and Hyde disease in which he has two personalities that seem to control each half of his body simultaneously, leading to painful results. Another man has a tumor on his stomach in the shape of a human face, one that happens to also be able to talk. We drop in on a human flesh eating party, scanning over the various delicacies like something out of a Mondo film (or maybe Indiana Jones and the Temple of Doom). Other “sicknesses” include the bloody face disease, which causes the sufferer to sweat blood, and a tattoo that manages to move around the body and change form. We also get a short skit featuring a woman and her recently deceased husband. He is slowly decaying, not exactly a zombie, but a guy who stopped living but refuses to die. Right after that short story, we get a warning about dangerous pets, and are shown an example in the form of a pile of bloody organs following a woman home. I mentioned that this whole thing is ridiculous, right? 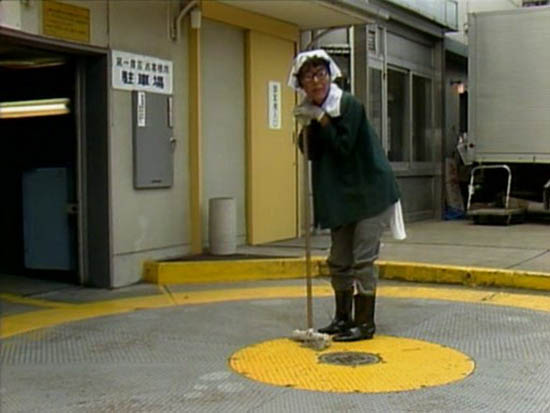 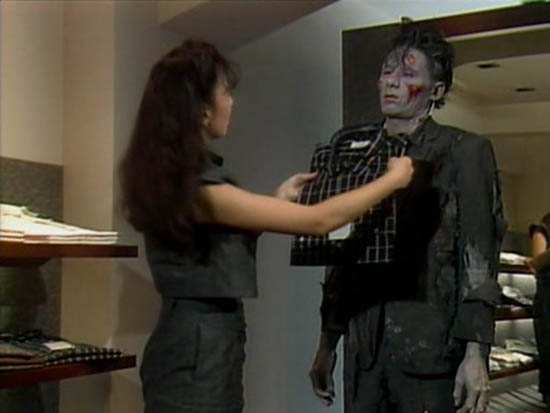 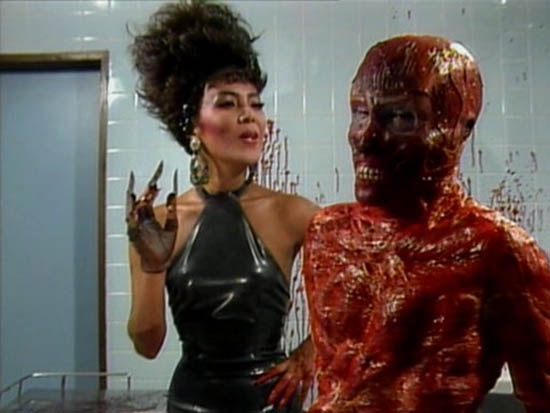 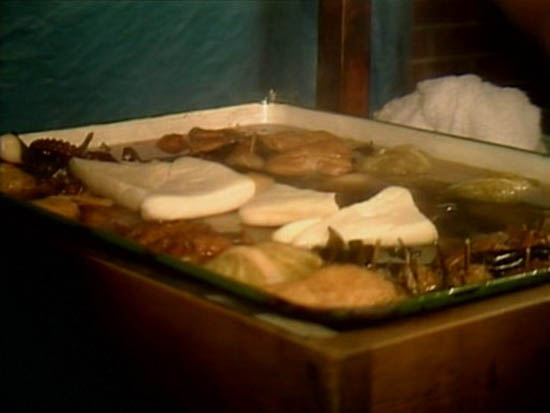 There’s something special about a movie that is able to combine horror and comedy in a way that actually works. I’m not talking about that Scary Movie garbage here, where cheap jokes are made at the expense of movies that someone saw the trailer for. Is Devil Doctor Woman scary? No, not really, but it is violent and very bloody. And even more than that, it is absurd, from beginning to end. Those two aspects combined, in this case, equal something special. It’s important to point out that at no moment does this film take itself too seriously, and I feel like all the silliness really builds well to bring us an ending to remember: It’s not only the four guys sitting around bragging about who has the worst (and most bizarre) condition, but add in the end credits pie throwing contest (with a twist). 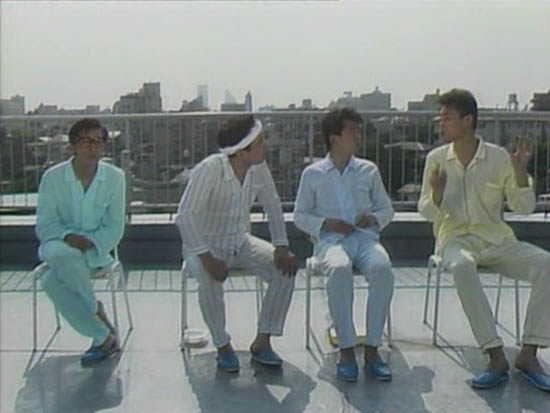 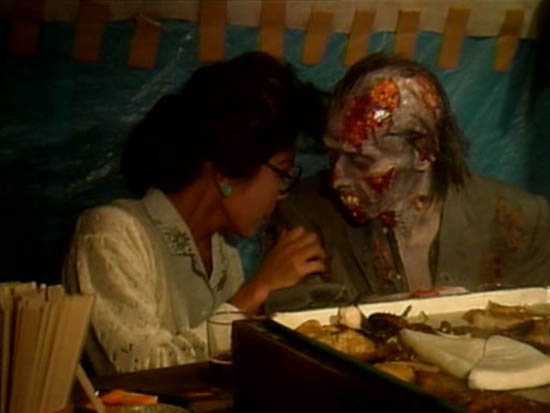 Devil Doctor Woman isn’t what you’d expect to see from a Guinea Pig film. Instead, it provides a moment or two of levity to an otherwise ultraviolent, sadistic series of gory movies. It still brings the nasty stuff, but in a very light-hearted kind of way. I wouldn’t recommend this film to people who are only looking for another pseudo-snuff film or to anyone who doesn’t enjoy fun. But if you like a bizarre edge to your horror, check this one out. I wish there were more movies like this.