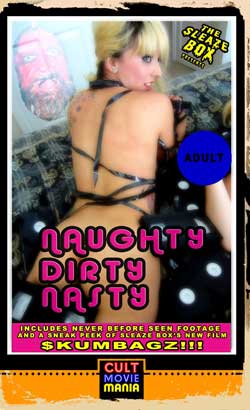 Naughty, Dirty, Nasty, as a title, is a rare moment of truth in advertising, because this movie is exactly that. It’s also a little weird, but I have to assume that adjective was left out because it would throw off the flow of the title. The movie was released in September, 2014, put out by The Sleaze Box, the same folks who brought you Amerikan Holokaust and Make Them Die Sleazy, among others. It is directed by Chris Woods and co-written by Woods and John Miller. This is a different kind of movie, so I had to think about how I wanted to review it for you fine followers of my reviews. It doesn’t have a traditional villain, it’s not packed with special effects. There’s not really that much dialogue. In fact, there’s really not too much traditional acting either. 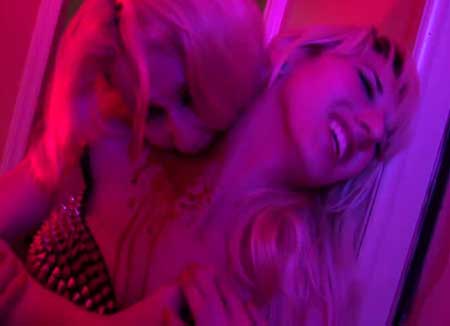 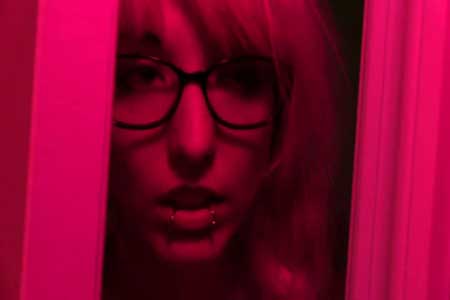 The film opens with Krystal Pixie Adams (a relative newcomer, she can be also be seen in Die Die Delta Pi, House Guest, and Amerikan Holokaust) waking up to find her room tinted red, a demon standing at her bed. Well, he’s not just an average demon, but according to the credits a sex demon, played by Bob Glazier (a veteran actor, and a familiar face around The Sleaze Box). She gets up and goes down her hall, which is now full of smoke. Mysterious hands reach out from doorways and tear her clothes off, and then two women in masks grab her from behind. And then things get naughty, and dirty, and, yes, nasty.

There isn’t really a linear story here, it’s more like a confusing, segmented nightmare (hers, not the viewers’). But what it is even more than that is about sixty minutes of pretty girls with little to no clothing on. The main girl, as mentioned, is played by Adams. You’ve also got Ashley Lynn Caputo (who you might remember seeing dismembered in American Guinea Pig: Bouquet of Guts and Gore), Sabine Von Katchen (also from Amerikan Holokaust), and Alice Reigns (her film debut). They don’t have character names, they really don’t have many lines. But we will see a lot of each of them, in various settings, throughout the film.

Naughty, Dirty, Nasty is a little bit Russ Meyer film (think more Pandora’s Peaks than Faster Pussycat! Kill! Kill!), a little bit Bettie Page, and a lot bit filthy. The girls have a more “alternative model” look (do they still call it that when a girl looks real?), dyed hair and pierced lips and tattoos all over. And the scenarios they find themselves in throughout the movie pretty much cover the spectrum of fetish and perversion. Really, that’s what this is, a collection of scenarios set to music. 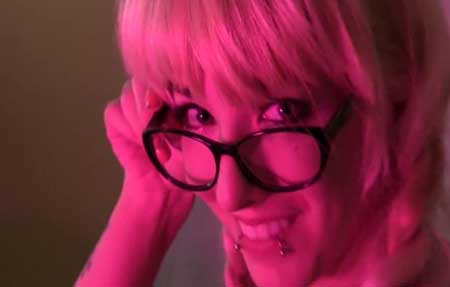 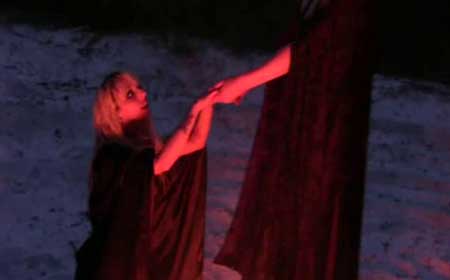 In one of the more tame scenes, a black and white one, the girls pose among gravestones, covered only by thin bikinis and black hooded cloaks. Eventually they dance around a fire, slowly removing what little they are wearing. And then out comes a knife. It is a dark setting, possibly the beginnings of a satanic ritual. In another scene, two girls giggle and “fight” over a popsicle, employing spanking, whips, ticklers, and handcuffs. Later, we see two girls rolling around naked in VHS cassettes and unspooled video tape, presumably a collector’s dream. We see the same girls later dancing and stripping in a room with horror and exploitation film posters covering the walls.

There are darker scenes as well. There’s a vampire scenario, complete with heart staking and neck biting. A scene with two girls in a bubble bath goes from sexy to sick when a bucket of blood, guts, and eyeballs is added to the mixture, inducing cannibalism. A similar scene appears later when Caputo, wearing a uniform reminiscent of that worn in Germany in the early 1940’s, has Adams on a leash and forces her to lick her boots, then shares a bloody shower with her.

The question is: is it all a dream, or is this real? We get an answer at the end, along with a climactic finish (pun intended). There’s some blood, some gore, some nudity (okay, a TON of it), all the components of a B-horror movie, but without actually being a B-horror movie. Naughty, Dirty, Nasty is quite a trip of a movie. I can’t really judge it as I normally would a horror film, so I’ll say this: if you’re into sleazy movies, and you like to watch pretty girls with tattoos dance in assorted horror-type scenarios, this is for you. If you insist on a clear plot and dialogue-based action, maybe try a different Sleaze Box release. If you aren’t into any of this, I’m not really sure why you’re reading this review… 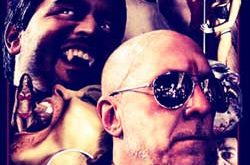 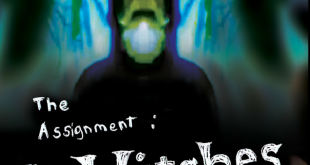 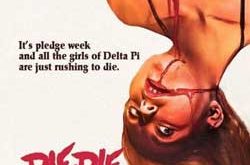