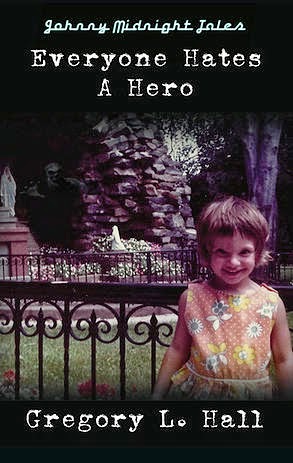 You probably know Greg Hall. He’s the Friday night piggy-petter and grand poobah of the no-pants zone who gives out 80’s headshots with the, ahem, personalized inscription stating that you are indeed his favorite writer. He gets some of the biggest names in horror on his podcast, the Funky Werepig, but never forgets to leave room for those writers struggling to get noticed. Also, he’s torn up the floor at  the big boy dance off every time I’ve seen him do it. But did you know he’s a writer, too? Yep, and Johnny Midnight ain’t his first time at the table, kiddies.

We have here a tale of a certain celebrity paranormal investigator, Johnny Midnight. A lude, crude and reckless individual whose antics draw ratings and groupies galore. But the song and dance routine lays a thin sheet over a world where the vamps and ghouls and things that go yippee-ki-yay in the night are all too real. It’s a world he has found a bit of comfort in, if not quite happiness. Until his ex-wife shows up on his doorstep with a demon on her heels that wants to crunch-n-munch on the daughter she never told him they had. This time, it’s personal…

Put aside, for the moment, that we are inundated with stories of paranormal investigators and a world full of paranormal creatures that are hidden from public view by a shady shadow cartel that is trying to run the world. Put aside, for the moment, that the “fighting evil is all good until they come after my family” routine has been done a million times. Or that the regular guy standing up and spitting at the huge organization that is trying to control him thing is even more played out. Put it aside because I really meant that cheesy “personal” comment.

That’s what makes this story, in my mind. First, Hall’s giddy dork-and-dick joke personality, which positivly glows every Friday night, is saturated in every word on the page. This is an old story told in a way only Greg Hall could tell it and that voice makes a huge difference for me. Further, it isn’t all “Not my Dickie!” and cracks about furries peppered with demons and chupacabras and blood. You’ll find plenty of that here, but he doesn’t stop there. This is, at its heart, a very personal tail of coming to terms with past sins and the harm we cause to other people with our own selfishness and how that regret never truly leaves us. There were some points, wrapped in grief and regret, that hit me square in my ouchy spots.

Special points are awarded for a particular pair of scenes, which flit back and forth between each other. Juxtaposing giddy sensual pleasure with abject agony and horror. It serves to underline the fundamental differences between the lives of the two characters, the fallout of that difference and subtly gives the reader everything they need to grasp the eventual twist of the knife that comes at the end.

In all truthiness, if you get turned off by rote plots you’ve seen far too many times before, you probably won’t make it past the blurb on the back. But then you’d miss a quick, breezy read full of more one-liners than you can shake your bacon at with a solid sense of personal honesty and heart at its center. That, my friends, is what completely sold me. Not that the gratuitous sex, blood and big-ass mobster zombie hurt.