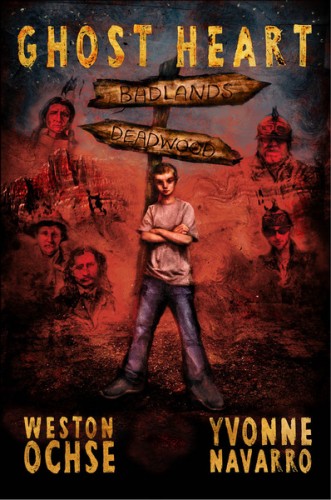 From the depths of night, the thing creeps along the ocean of imagination, pulling itself with talons jagged from too much murder. Hunger fuels the hunt as it searches for the light. Its hiss drowned out by the rock and roll music that thunders from man-sized speakers. A Human throng sways to the primal rhythms. Here and there are the lights it craves. With a cry, it launches from the back of its human host and falls upon the crowd, enveloping a being of light.

The dancing continues as it feeds.

And the murder goes unnoticed.

Weston Ochse has been on a lot of tongues lately, with the Seal Team 666 movie in the works, but I haven’t had much opportunity to read anything by him. There have been a few short stories I’ve stumbled across in anthologies and podcasts, but that is about all. I’ve never read anything by Yvonne Navarro. After reading Ghost Heart, I want to kick myself in the face for those personal faults.

Let’s get to the book: Matt Cady is about as typical Midwestern young’n as you can get, up to and including the impending divorce of his parents. Except maybe for the fact that his imaginary friend, a grizzled biker named Jacket, is actually a guardian spirit and he can see and talk to other spirits, both guardian and otherwise. When he runs away from home in a desperate bid he runs afoul of a giant bull, befriends a witch and a troll and comes face to face with both spiritual and human evil. Needless to say, Jacket was not particularly fond of the idea.

Comparison to Something Wicked This Way Comes immediately comes to mind, as Yvonne and Weston bring in that same comforting yet engaging style of prose that his the eyes and ears like the rumbling voice of Grampa in his rocking chair on a slow twilight eve. They had me full-on from the first paragraph and I dug every second of it. It’s hard to come across people who can mimic the feel of the oral tradition, but these two do it admirably.

While not complex, it is also not condescending. The story deals with loss, violence, drugs and a slew of other ugly issues of life with no wincing or whinging. The drama is a bit over the top at times, but in the way that all minor tragedies seem cataclysmic for the age of our main character. The big issues hit hard. I appreciate that. I also appreciate the lack of pure good/evil in some of the characters. Sure, Ali Baba is a douche and the Bull is a pretty crappy human being, but there are several that initially seem horrible who may not be quite be so and the dynamic duo here never stop the tale to tell the reader what to believe. And there is the way they drop the odd bits of weird with no immediate explanation, just letting the reading figure it out in their own time. Loved that.

And there are Motorcycles. Vroom Vroom, baby.

On the down side, I didn’t really like that our boy, Matt, shows very little agency in the course of the story. After he initially runs away, most of the story is about things happening to him. The conflicts are almost all resolved by others for him, both to protect him and by the all powerful Deus Ex. I would have liked it more if he had more of a place than an observer in so much of this. Also, the story and characters feel a bit dated, like this is more of an eighties tale than a modern one. No time period is given, so that may actually be the case, but modern kids may have a hard time relating.

Ghost Heart wears its YA proudly on its sleeve. A fairly straight-forward and relatively simple tale that has a ton of heart and a powerful voice.  Also ghosts and motorcycles and cowboys and Indians and trolls and giant bulls and witches and ghosts riding motorcycles, which are all pretty nifty on their own. I had a fun time with it.