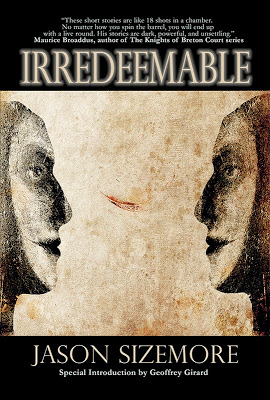 She is perched high above the ground on a tree branch near the top of a weeping willow, swaying in the chilling riverside breeze. She watches the watcher through shimmering leaves, a set of hidden eyes participating in a feast of perversity. -“For the Sake of Pleasing”

I had high hopes for Irredeemable. Sizemore has proven himself a man of impeccable taste as a publisher. He knows what works in literature and makes solid use of that knowledge. However, I have a tough time giving the categorical high five I expected to his first collection of short fiction.

The big problem that Irredeemable runs into is that it is incredibly uneven. There are some damn good stories here, to be sure, but there are just as many forgettable and bland bits as well. The first three stories came across as clunky, meandering and lacking in focus, with no real impact to them. To be honest, if not for the credit Jason’s reputation has built up, I would’ve stopped reading by then. That isn’t mentioning the overused Zombie-as-Divine-Retribution trope and a frigging Dream Ending in later stories. This was not the side of Sizemore I was hoping to read.

But, with “For the Sake of Pleasing”, the collection turns around a bit. The prose is every bit as personable, the characters as in depth and engaging and the ideas as complicated as I had every reason to expect from the man. It is, however, hampered by truncated novel idea syndrome. Aliens and psionics and other supernatural and superpowers with international spy conglomerates, beings who cannot feel emotions on their own and have to thrive on the pheromones and feelings of others and that huge history hinted at with the aliens are all too much to work in the slightly less than 40 pages given here. “Sonic Scarring” has the same advantages and problems, but if they are turned into novels that give them the room they need to build on what is introduced I will be throwing money at the man.

Then there are “Pranks”, which pleasantly reminded me of R.L. Stine, “Special Delivery”, a fun and painful approach to employee motivation, and “Ice Cream at the Falls”, that had the feel of an old time ghost story told on the porch at dusk. Damn good yarns, those. “Mr. Templar” really kicks the door off the hinges, though. Such a wonderful way of dealing with the desperate grasping for hope and religious truth that uses the androids to terrific effect. More so with “Yellow Warblers”, that really nails the feel of backwoods Kentucky while playing with the issues of anthropologists going into tribal areas in a way that socked me square in my dangly bits. Why the hell was this one buried all the way at the end?

Irredeemable shows a variety of interests, ranging from intimate Gothic horror to grand science fiction, as well as some quite interesting ideas behind the stories. It’s too bad that it is hampered by far too many mediocre tales that fall so far below the level of talent and insight shown in the quality stories.