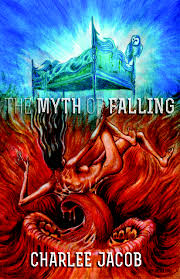 It’s everything you never wanted to hear or that perhaps you or somebody you knew suffered through, whether from the human misery of this universe or a criminality intruding from the supernatural.   -from Essay I: The Myth of Falling

I’ve been known to mutter that one of the best reason to create art, to spin the patently unreal out of vapors and dust, is to process the incongruities of reality. To reflect and refract this perpetually shifting blob of experience into something a bit more reasonable. But what do we do when the mechanism of collection itself becomes twisted, when the funhouse mirrors begin to buckle and shift like slow-pulled taffy, in unintended and unreasonable directions. What, then, becomes of the product, the art?

I ask because I’m having a particularly tough time reviewing this work in a coherent fashion. This product of a woman whose work has always moved and often changed me. If you don’t know what I’m talking about, read Soma or Vectors. Even if you do, read them again. But, due to an abominable conglomeration of illnesses, I was sure I would not have the opportunity to travel through her mind again.

What does that have to do with The Myth of Falling? Nothing and everything, as the cliché goes. It is a collection that is inseparable from Charlee herself. From a past steeped in the types of things no one should have to even be aware of, let alone experience. From a present mired in alien flesh and misfiring nerves. The lens warped enough to show the fissures in the firmament we try so hard to tell ourselves is solid.

This isn’t something that can be dealt with in the manner of most collections. There are stories here. Tight, concise bits of prose that do more in three pages than most writers can pull off in a series of thousand page novels. But there are more of what I would tentatively call prose poems, though they likely squirm their way free of that tidy cage. These beautiful and terrifying and heroically horrific tangles of words that would writhe and wrap and slink just out of the grasp of my feeble mind. Waves of emotion and sensation that I had to read three or four times just to begin to sense the outline of reason. Like walking on that putty you can make with cornstarch. And don’t be fooled when you catch that “essay” epithet; those hold some of the slipperiest thoughts of the book.

On several occasions, I was brought to tears. On others, filled with elation. Quite a few times, I got angry and frustrated while overextending myself grasping at a meaning I was sure lurked just outside of my reach. Worse, all of these experiences have blurred into each other so that I can barely distinguish what pages brought about which emotion.

What that means for you, oh dear reader, is that you will likely either consider this a work of genius or absolute bullshit. I don’t see any middle ground on that. It certainly is not a book that will engender apathy.