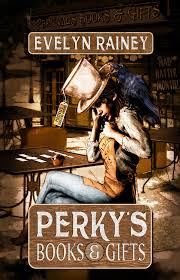 I’ll never forget what I saw. Blood splattered the books and dripped from the shelves. Chunks of –something- globbed the carpet.

“What is that?” I whispered.

“Looks like an ears,” the Colonel replied, staring at the globby thing by his foot.

“No, not specifically, Colonel.” I swallowed and swayed. “What is that, in general?”

“A dead body.” The Colonel snorted. “Or parts there of.”

Usually, I am pretty clear on how I feel about a book. I had a good time or I didn’t. Simple. This one, though, I’m a bit torn over. SO, I apologize for any potential confusion in advance.

I submit, for your approval, Percival’s Books and Gifts, better known as Perky’s. It’s your average chain bookstore, down to the expected café in the back. As long as you ignore the corpse of the café manager behind the werewolf display. Or the sales clerk, er ambassador, who carries on conversations with ghosts about potential purchases that can’t quite make. Or the new nigh manager who spews latin when she gets nervous. Wait, is that lady a crow? And the Colonel really needs to relax some. SOMEBODY please clean up the body over in romance!

Here is what I definitely liked: Evelyn Rainey writes smoothly and personably and with a solid sense of personality. I moved through the pages like I was skating on butter. And the characters, while fairly flat, are highly entertaining. I dug the crazy guy who was always an inch or so away from killing pretty much everyone. Also, the action flew by and kept coming. You could not ask for a more kinetic tale than this. I had fun reading it.

But, look back at that flat character issue. The Colonel is no nonsense and loyal. The crazy guy is crazy. The new GM is nervous and determined. The Wiccan is angry most of the time. The Crow lady is mysterious. You get it all right from the first moment you see them and not much depth is added. Similarly, there really isn’t any growth that occurs, even within Madison, the person in whose head we are placed. That ties into the biggest sin for me, I couldn’t find a story here. Sure, among all of the other occurrences, there is the mystery of the deaths and that really strange new Café manager and the blossoming relationship between Madison and the new GM but none of those are given any more importance than anything else that happens and the whole lacks a sense of cohesion. That frustrates the crap out of me and would usually be enough for me to abjectly pan any book.

But, look back at my use of the “f” word. I read for a glimpse into other lives or a new perspective on my own or to feel a common voice echoing in the dark or to simply have my heart and mind rended. I also read for fun. And I had fun reading Perky’s. Take that for what you will.

By it directly from Bedlam Press here.