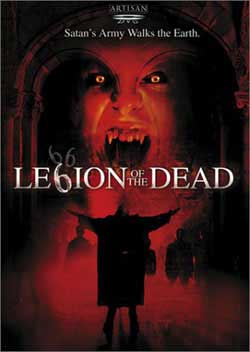 Two guys, William and his side kick Luke have just started their trip through the beautiful California desert when they’re kidnapped by the notorious Psycho Mike, The Kern River Killer. Securing their escape through hilarious means and the aid of an old friend they soon stumble into a small desert town where unbeknownst to them a mysterious tall Blond Man and his sadistic henchmen are killing people to create a Legion of the dead. Here’s where it gets tricky. William falls in love with Geena, the beautiful waitress at the local restaurant and Luke spins out of control hormonally.

The restaurant is suddenly attacked by the LEGION and the tall Blond Man gives an ultimatum to hand over Geena within two hours or he will personally come in to get her. What is the mysterious secret that Geena and the Blond Man share? The clock ticks as the ultimatum draws near. The fight against evil has just begun…

You might recognize this title that occupies the Block buster shelves. Though my recollection of the film was that it was severely edited down, not featuring alot of the extreme elements that the original cut does. So I returned to the film with new expectations and the knowledge that it was directed and written by one of my favorite extreme filmmakers Olaf Ittenbach.  Now I must say this more extreme version felt alot more appropriate than the one I recall. Though the film itself has quite a bit of campy elements as well. First off, to get down to what is going on… a blond man who calls himself Togaio (Matthias Hues) is hot on the trail to round up a band of legion followers that he can build an army from. 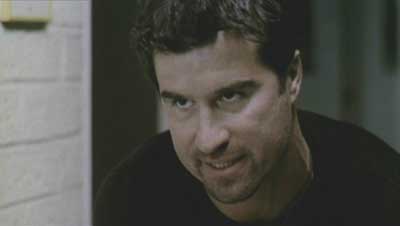 This man who we assume is the devil or some level of, has sent out his derelict soldiers to bring folks in by ringing doorbells, killing them and turning them into demons. The 2 mobster looking men in cheap suits who were granted immortality seem to bicker more than enlisting soldiers but seem to convert a few along the way. The idea is simple..they enter, they tie up the residents and then offer them the chance to pick their execution. The whole approach is sloppy, comedic and bloody as hell rolled up into one. My guess is, many of these scenes were the ones cut out before. As dorky as these 2 are, they still manage to shoot, stab and hack away at the victims. 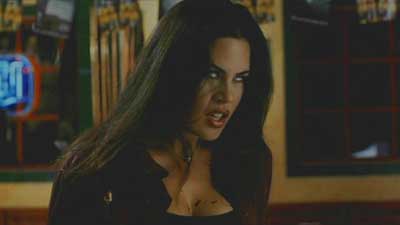 The comedy comes in the way of running into poles, yellow suits and a knack for screwing up every visit. Lucky for them mortality is in effect or we would have lost them at the films start. William (Michael Carr) and Luke (Russell Friedenberg) are the main actors in this film that also bicker, play games and end up a the showdown bar. As they make their way thru the desert, they get picked up by an old man who turns out to be the ‘Kern River Killer’ and torments them a bit in the rather long car ride. The man goes into epileptic shocks and back again as he holds the 2 hostage for the ride. They end up meeting another cowboy on the terrain fella who sort of joins forces with them as they travel. The idea of this and the implementation are a little cloudy at times. The whole root of this film seems to be getting all to this bar where hell can break loose.

Speaking of bar, the lovely bartender Geena ( Kimberly Liebe) seems to be at the object of the devils desire. In fact, the whole final confrontation seems to be about her submission to him. She morphs and forth between hot chick and a no faced demon who also has the power to create more demons. Innocently enough she seems more happy just being a bar waitress than messing with the devil. A few encounters with her prove to be fatal for those who try and one up her. 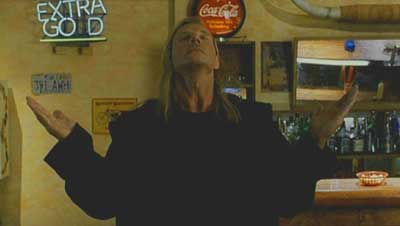 The movie really is an odd version of “Dusk to Dawn” the way it sort of culminates, but it is missing much of the great elements that Dusk had. The demons range from effective to cheesy and the whole film is tapered under a comedic dark tone. We culminate in a bar standoff fight against demons and Togaio which has several just poppin back and forth into demon and non demon mode. The idea was good but still a little confusing at times. This stand off reminded me not only of Dusk to Dawn but of “Supernatural” and the new film “Legion”. Whether it be a bar or road side diner, it seems to be the setting for demon stand-offs. 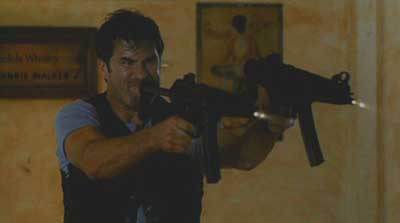 The odd thing here is that when Togaoi finally shows up, he grants the occupants 2 hours to get their act together. 2 hours? Seems a bit long for a anticipated slaughter. What happened to 5 minutes? With 2 hours, they get to hang out, drink a bit and maybe cath a tv show while they wait. Any case, the confrotation is a bit weird and mostly shows Togaio standing against a blue light with his legion beside him.  Now for horror lovers I should point out that the american version which is highly edited, just plain sucks. Though, the uncut original one has those missing gory elements that really make this appeal. The FX are the appeal and when they are cut out, its just pure crap. So my advice is hunt down the unedited one and give it a whirl. The film insn’t perfect and misses alot of marks but has some interesting almost cult like elements to it. The cgi is bad but the practical fx are good. The devil himself is laughable and probably not even needed in this film to work. But that’s not the case.