Okay, so apparently, back in 1999, Andreas Pape (a regular in Timo Rose films) and Oliver Kellisch (an actor almost exclusively in Timo Rose films) got together and made a short (28 minutes long) German splatter movie about a zombie with a chainsaw called Kettensagen Zombies (or Chainsaw Zombies). For whatever reason, in 2010 the same two directors got together, along with their 1999 short, and re-cut, re-edited, and re-packaged the same movie into a new, 34 minute long movie about a zombie with a chainsaw. The new version is called Kettensagen Zombies Redux – the Ultimate Director’s Cut, and while the motivation behind the project seems strange, especially since they could have just as easily made a new movie, the German splatter features are still all in there for the die hards.

Kettensagen Zombies Redux has no subtitles, so we’re working with a strictly German dialogue track here. I can’t imagine we’re missing anything integral to the plot that we can figure out by simply watching, seeing as how the short film has very little dialogue to begin with. The story revolves quite simply around a maniac who, after shooting at a passing car, gets killed by a guy with a chainsaw and buried in a random field. Fast forward one year, when some friends go out camping and drinking, and one of them goes off to relieve himself, coincidentally in the same spot as where the maniac was buried. After “breaking the seal,” he crushes his beer can in his hand, cutting himself and dripping blood onto the ground. Guess who is brought back from the dead by the blood? You’re right, it’s the maniac from earlier, and he seems angry.

There’s not much of a plot to Pape and Kellisch’s movie, but more of a fun weekend shared among friends who decided it would be cool to make a random zombie movie but forgot that plot points are necessary. The rest of the movie is just the chainsaw wielding, undead maniac killing people, mostly by cutting their arms off (seriously, there must have been a sale at the prop store for fake arms, because this zombie just keeps cutting them off). We get a bunch of blood, of course, and by the end the zombie’s face is pretty much dripping with the red stuff. But is this enough to hold an audience’s attention, even if it is for only 34 minutes? My answer to that is “yes.” And “no.”

There is little to no point to this movie other than people getting chopped up and blood spraying everywhere. The directors even have random people appear just so that they might kill them and spray their blood and entrails across the screen. There’s no reason behind the killer’s killings, no motivation other than he is perhaps angry about being dead. The victims are all just random, nameless (and practically faceless) dudes: some friends who were hoping to camp out and get wasted, a hip-hop fan sitting at a bench, a hunter, a bicyclist, and even a random guy driving down the road.

All that said, I can’t say that Kettensagen Zombies Redux isn’t a fun movie. Yes, it is nearly pointless, and yes, it relies on overly familiar tropes. But still, seeing a dude with a chainsaw cut random people up in the blood splattering-est of ways can be kinda fun sometimes. There isn’t any down time, either. Once the maniac digs himself out of his shallow grave, it is non-step killing until the very end of the movie. Lots of limbs and heads are chopped off, a couple crotches are cut through, and even a dude’s genitals are chopped off. It’s almost more fun thinking about the fact that the killer is doing all of this “just because.”

Kettensagen Zombies Redux is classic German splatter. Maybe the plot isn’t very tight, and maybe the budget is lower than low. Maybe the effects aren’t the best ever seen, and maybe we wonder why these guys decided to re-edit a movie that had sat for over ten years.

But, bottom line is you can tell that these people had fun making this movie. And isn’t that way more fun anyway? We could go sit through a fancy art film, not understand a bit of it, and then brag that we saw it and we loved it (even though we didn’t), or we could watch a movie made by a bunch of friends who just love making movies, and watch as that excitement translates through the screen, making a dull, predictable movie that much more fun. That’s what I did, and I recommend going in with an open mind and a happiness to see people doing what they love. You could waste a half hour watching some lame new sitcom with a laugh track, or you could have a way better time watching bloodshed for bloodshed’s sake while checking out Kettensagen Zombies Redux. 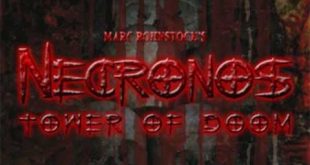