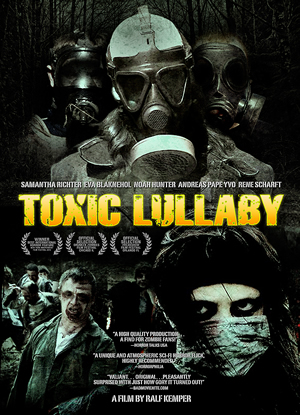 After a night of partying in the countryside with her close friends, Eloise (Samantha Richter) wakes up all alone only to find the world around her is drastically different. The landscape has become desolate populated with zombie-like monsters called “sleepers” ready to chase her down. She reaches out to other survivors, but not all are friendly; many are even more dangerous than the beasts looking to devour her flesh. She struggles to relocate her lost friends and rediscover her lost self as she begins to unravel how she ended up in this unfamiliar world. She may not like the secrets those mysteries hold.

Toxic Lullaby from German director Ralf Kemper is much a unique and captivating blend of Dawn of the Dead and Memento (but without the whole being told backward bit). The film, with its unique title, is a strong, refreshing entry to low-budget zombie fare with decent pacing, great acting and plenty of mood and gore. Kemper pulls together an interesting story that succeeds despite its typical low budget flaws. In addition to the zombie apocalypse and the lead not knowing who or where she is, the characters also have to deal with the air they breathe being toxic and suspect of causing the outbreak. This has many of the characters draped in hoods or wearing gas masks which lends to the film’s industrial feel. This succeeds in setting the film apart from many of its zombie film counter parts giving the characters extra motivation and conflict. 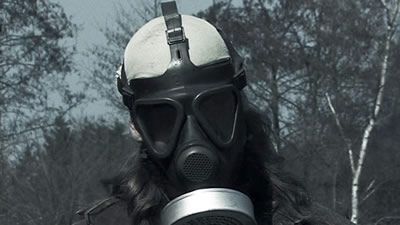 The film’s biggest assets are its direction and cinematography, both handled (along with the editing and scripting) by Ralf Kemper. The film has a distinct style and tone that make it stand out. Kemper resists showboating with over stylized tricks or zany camera angles or shots, instead he keeps things rigid and focused, in a good way. It is very much like an industrial version of 28 Days Later with far more blue and gray tones. The low budget approach keeps the action immediate and authentic as well. Even if the plot has the character and the story going in circles at times, the momentum is always maintained. Unfortunately, the film is somewhat marred by a predictable plot, telegraphed plot twists and a lack of memorable zombies and characters. Some of this may be lost in translation from its German origins. Regardless, the end result is satisfying and rewarding. 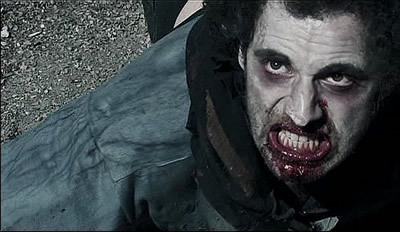 Samantha Richter is the stand out cast member of Toxic Lullaby. As the lead character. Eloise, a lot of the film rests on her shoulders. The story constrains her performance at first making it difficult to enjoy the role; but, once she breaks out of her initial shell and begins to discover more about herself and her surroundings, she wins over the audience gaining the needed sympathy to keep the story personal and interesting. It is to her credit that she creates visual bonds and connections with the other cast members that make their performances that much stronger for it. Noah Hunter plays Bretroia, one of the survivors that stands by Eloise the longest. Richter and Hunter have a natural chemistry that makes their relationship appealing. Eva Belkenhol plays Penny another survivor who befriends and aids Eloise in her journey. Her appearance, dressed in all black with black makeup around her eyes, and her motivations are the most interesting of the bunch. 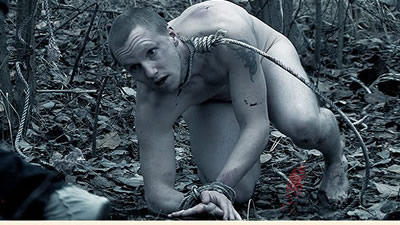 The zombies in Toxic Lullaby, called “sleepers” because they become inert during the day (most of the time), are grittier versions of the running zombies made popular in 28 Days Later and Zach Snyder’s Dawn of the Dead. But, this is only once they jump into action. At other times, when they are ‘”sleeping,” they stand around like a Romero zombie or even those found in Hammer’s The Plague of the Zombies. It’s an interesting twist, statuesque zombies that suddenly spring into action, that the film never fully capitalizes upon. From the onset, the characters consistently note that the “sleepers” are more awake than usual robbing the audience of any potential of seeing the cast sneaking a snoozing ghouls or the witnessing the full contrast between sleeping zombie and attack zombie. The concept is presented enough to make it relevant to the story but seems unimportant by the end. As with many low budget zombie films, the zombies themselves have trouble standing out in the crowded cinematic arena of zombie history. The more memorable zombies are the ones that were once human and have either gained the audience’s sympathy or have harmed Eloise becoming a bigger threat once joining the undead. But they are more memorable because of the impact, not because of the visuals. The films leans more toward the human side of the infection instead of the more sensational gore zombie creations which suits the tone of the story. 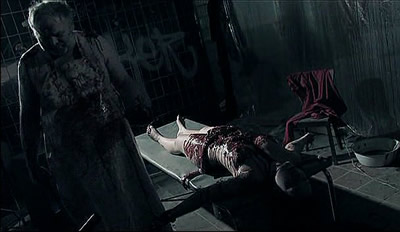 Toxic Lullaby is a creative surprise. It continually tries something new but with a focused story on its lead character, Eloise. The film’s biggest struggle is that Eloise’s character and story never matches the stronger concepts surrounding her. The toxic oxygen, the diverse communities of survivors and the “sleeper” zombies are only touched upon until they fall away to the final reveal of Eloise’s past. At this point, the film becomes much more like Night of the Living Dead than any other zombie film. Still, the journey to the conclusion is rich and interesting with solid direction and cinematography that push the film beyond its low budget. The cast is strong and, while they most likely play even stronger in their native Germany, each actor provides the film with unique and recognizable characters: some to like, others to despise. In the end, Toxic Lullaby is a film well worth watching.