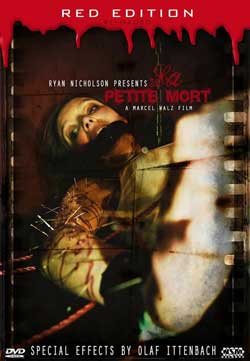 Three friends, Simon, Nina and Dodo fly on holidayы to Spain. On their way happens a delay in Frankfurt, where they eventually have been robbed. Depressed, they stop to drink at the bar, where get to masochists and murderers.

This film has been on radar to view and review for awhile. Mainly because I knew Olaf Ittenbach was handling the FX work but also because these German films tend to be bat-shit crazy at times. I’ve had the film in possession for over 2 years though it was sent to me from Germany without subtitles. So recently obtaining subtitles. I found that they didn’t match up. Frustrated and determined, I decided to watch the film with the subtitles open on my computer to “read along” when necessary. It’s not my favorite method for doing so, but it works “sort of” from a “not any more options” basis.

Nina and her friend Dodo make the mistake of insulting the waitress and her lifestyle which gets then into deep trouble with the club (prompting our nasty violent film to start and take form). While this “wrong place scenario” has been done before more of less with the Hostel films, “La Petite Mort” manages to do it in much seedier (graphic) way. We meet Madame Fabienne (Manoush) who runs an underground business with her maniacal daughters Dominique (Annika Strauss) and Angélique (Magdalena Kalley).

“Maison de La Petite Mort” acts as a front for far more sinister intentions selling victims to wealthy businessmen who want to see them tortured (at a high cost) in the methods they choose (Note: yes we also might remember this approach in the “Hostel” franchise). Seeing that this film arrived in 2009 (after the Hostel films), it’s very well possible that director Marcel Walz was inspired to make his own version. Though as mentioned before, with Olaf Ittenbach on hand, you know it’s gonna be nasty!

In the back rooms of this off skirt club, the facility acts as a torture chamber setup complete with cages, racks, and what not. SPOILER: Simon doesn’t last too long as he is placed within a stand up cage and immediately stabbed in the eye. While this effect is pretty gruesome (and done in a way that feels authentic), it’s what proceeds that ramps up the gore. Simon is castrated while still alive followed by his stomach cut being cut open for the purpose of bathing Dominique in a gore shower.

The 2 female captives are slowly tortured with simple pin insertions and a mousetrap to the mouth. While these tactics are “merely” a warm up, it’s what follows later that delivers this film into nastier segments. The film while assumed to be “slaughter at every stop” takes its time to evolve a bit on screen with lengthier dialogs and some spiel about being “submissive without any control over what is happening” (note: this is portion where you refill your drinks and grab some snacks). The 2 girls are toyed with a bit and made to dress up while horrible acts are being inflicted upon them per the order of some local high paying weirdos.

This “ease in” approach sets things in place for what later comes. “La Petite Mort” is without a doubt, a cruel experience that is enhanced by the FX work of Olaf Ittenbach. The viciousness is kept to a minimum rather than filling every moment with pain. The incidences that “do” occur are painful to watch and see inflicted upon another. But of course this is the reason you bought this film to begin with! 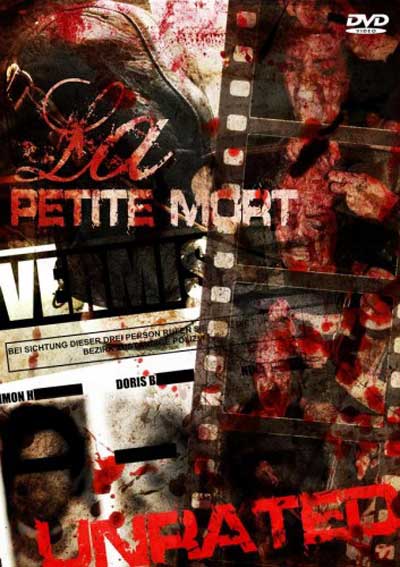 Though what I didn’t expect was the use of gunfire for a few of the sequences. This seemed to be a simple resolve for some of the main characters (which in a full extreme full throttle production would have used every potential death as a reason to drum up something nastier. “La Petite Mort” offers its share of visceral moments that will still satisfy the hardiest gore hound audience members. The ending feels rushed, and much like they gave their FX crew the day off. Oh well, can’t have em all, I suppose.