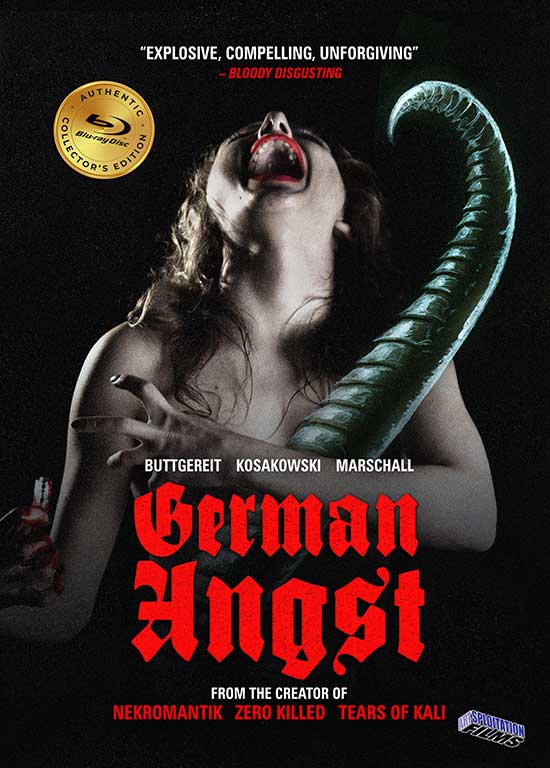 Three German tales of love, sex and death in Berlin from Germany’s most shocking directors.

I have been hearing about and reading about and anxiously awaiting for the release of German Angst for close to two years, and now it has finally arrived. There’s been a lot of buzz about this anthology, and for the longest time it was getting mentioned in a lot of the same conversations as The Profane Exhibit, another much-awaited anthology film with big names from the horror world (a movie featuring heavyweights like Ruggero Deodato, Ryan Nicholson, Richard Stanley, and Jose Mojica Marins, among others, which unfortunately still has not yet seen the light of day). Thankfully, the wait is over for this German horror collection featuring a trio being touted as the country’s “most shocking directors”: Jorg Buttgereit (Nekromantik), Michal Kosakowski (Zero Killed), and Andreas Marschall (Tears of Kali).

The anthology is split into three separate stories, each by one of the three directors. And first up we have “Final Girl,” the much awaited return to horror by writer and director Jorg Buttgereit (believe it or not, Schramm: Into the Mind of a Serial Killer was released way back in 1993). This is a very subtle short film that for brief moments gives us shocking glimpses of absolute horror. We follow a young girl (billed only as “Girl” and played by Lola Gave) as she starts her day. She plays with her pet guinea pig while the radio speaks of a horrific domestic violence incident. As she enters a closed room with large clippers in her hands, and her voiceover describes a veterinarian’s procedure for castrating a guinea pig, we see a man (“Father,” played by Axel Holst) tied down to the bed. “Final Girl” is like a puzzle in that we are given little bits of info, through flashback images and voiceovers about one thing but probably also referring to something else and undertones of abuse (possibly physical and sexual), but in the end we’re still left questioning what is real and what is fantasy. It’s a typical blend of style and substance that fans of Buttgereit are familiar with, and honestly it’s great to have him back.

“Make a Wish,” the second film of the trio, is written by Michal Kosakowski and Goran Mimica and directed by Kosakowski. In this brutal short film, we focus on Jacek (Matthan Harris) and Kasia (Annika Strauss), a young deaf and mute couple, as they take a romantic stroll. They decide to sneak into an old factory and look around. While there, Jacek gives Kasia a gift of an amulet and relays its origin story. We flashback to the Nazis raiding a small village, killing almost everyone in sight, except a young girl, who uses the amulet to switch the bodies and minds of the lead soldier and an elderly relative of hers in order to hopefully save herself. Back to the present, a gang of angry thugs, led by Jens (Andreas Pape) starts messing with the couple, beating on them, humiliating them, and we think back to the amulet that Kasia is holding. Does it really have the powers from the story? This is a brutal and angry depiction of racism and xenophobia, and probably the more upsetting of the three segments of German Angst.

Part three brings us “Alraune,” written and directed by Andreas Marschall. If “Final Girl” is the art piece, and “Make a Wish” is the violent one, then “Alraune” is the deep-thinker of the group. Told as a series of flashbacks of the event, Eden (Milton Welsh) tells his girlfriend, Maya (Desiree Giorgetti), about the time he met a girl through a p**n site and set up to meet with her at a dance club without even knowing what she looked like, just being told “he’d know” who she is. He watches a girl, “his” girl he’s sure, (Kira, played by Kristina Kostiv) dance against a pole, and they quickly end up in the restroom together.

She is frightened when she sees a drawing of a strange creature on the wall, and run out, which of course means he follows her…and we see what he does not, that the girl he was supposed to meet is still sitting at the bar, waiting for him. He catches up to her at a private club, where he is given a pipe to smoke, then tied to a bed and blindfolded and directed to never look at what is happening, no matter what. He then experiences the craziest, most intense sex he has ever had, and he is instantly addicted. But not all is as it seems, and all of the mysteries behind the intensity of it all might hold an unknown danger. There’s a lot more to this one, of course, but to tell too much is to spoil the fun. This segment is darkly sexual and mysterious. It feels a little bit Cronenberg, a little bit Jacob’s Ladder, and a little bit “Lover’s Vow”/Tales from the Darkside: The Movie, all of that being complimentary, of course.

As a horror anthology, German Angst works very well, even if it is a little different from the norm. There is no wraparound story to tie the segments together, but instead a common setting (Berlin) and a common theme: angst, as the title suggests, whether relating to addiction or hatred or domestic abuse. Unlike some anthology films, all three of the shorts in this one feel like they belong together, they share a common mood. I really like the way the titles are given to us for each segment as well; each is incorporated into the film. For example, “Final Girl” is the title of a magazine in the main character’s bedroom, while “Make a Wish” is seen as graffiti on a wall. It’s the little things like that that help make a movie stand out. Then again, the stories speak loudly for themselves here, and each does its own part to make German Angst a great film to check out.

German Angst is now avalable on bluray per Artsploitation Films