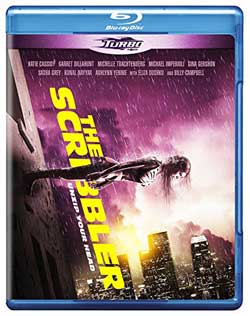 A young woman is facing her destructive multiple personalities using an experimental new procedure known as “The Siamese Burn.”

In most cases where a graphic novel is translated into a film, you end up with something unique. Especially for those of us who have never read the graphic novel. I get the same feeling when I’m viewing those Sin City movies. In other words, the viewer is submerged in a new experience. A world that they have yet to discover. “The Scribbler” was my new discovery. Though sometimes with discoveries also comes confusion.

The film is directed by John Suits and written by Daniel Schaffer, the British author of the graphic novel (of same name). The film’s characters all appear to be “mostly” social misfit mental patients of one sort or the other, now residents to a large hospital called Juniper Towers. Juniper really is more like a confined apartment complex that allows its inhabitants to roam freely about the building. In the journey of Junipers Towers we are introduced to Cleo (Gina Gershon), a bipolar sex addict, Emily (Ashlynn Yennie), pathological fashion nut who has a fear of clothes, Bunny (Sasha Grey), Hogan (Garret Dillahunt), the only male resident and house “stud”, Alice/Veronica (Michelle Trachtenberg) a territorial bitch who loves to push others down stairs and Suki (Katie Cassidy).

Suki (Katie Cassidy) is our main character of the film. She suffers from a multi personality disorder more clinically titled “associate identity disorder”. Suki also has a knack and obsession with writing backwards. The side effect sometimes prevents her from talking without writing, thus her given nickname, “the Scribbler”. There is much more to this “Scribbler” identity than just mirror reflective paragraphs. As the film builds we begin to discover that one of Suki’s personalities, The Scribbler may in fact be the core personality using Suki as a go-between. Suki also appears to possess powers such as climbing walls, increased strength and telekinesis. The effects are rooted to a treatment device they call “the Siamese Burn Module” of which Suki is actually recommended to use to rid her of unneeded personalities. 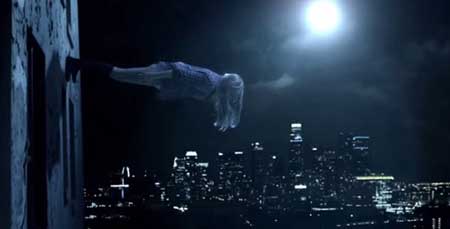 The film, plays out very differently than others (in the way you might feel if you stepped into a room discussion that was already 1 hour in). Due to this, it does take a bit to get the feel of where things are going. As a super hero film, “The Scribbler” is  somewhat of a horror film. The horror aspect is much lighter left to only the mass suicides and freaky changes that occur within Suki. So for those expecting traditional “horror”, it’s just not that kind of film. 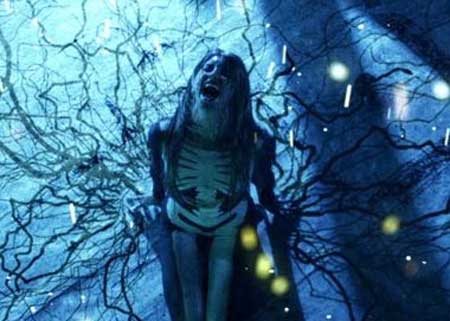 Other characters we encounter include Dr Sinclair, Suki’s primary physician responsible for placing her at Junipers. Jennifer Silk (Eliza Dushku) is the criminal psychologist, who in combination with Officer O’Reilly, is trying to get to the bottom of what’s been occurring recently at the Towers. Mainly the excess amount of jumpers.

The film “The Scribbler” does have its flaws. Basically it’s a matter of what the budget allows under the confine of shooting. The film was mostly shot at the famed Vista Community Hospital located in Los Angeles, CA which provides a decent setting for the film. The Vista Community Hospital is used quite alot in L.A. based horror films (in case your taking note)

The FX is as good as most but personally I thought it could have ramped things up even further on a bigger budget.

Actress Katie Cassidy who has appeared in quite a bit of films as of late (including Arrow and Supernatural TV Series…) plays the Suki character like she was born for it. Her half-whacked aggressiveness combined with her stunning beauty makes for quite the femme fatale. I really couldn’t think of any other choice to fill the role in quite the same way, however with that said she also is ready for bigger roles. Fans of Katie will also get some pretty racy scenes to enjoy in the journey which might be worth the price of admission alone. 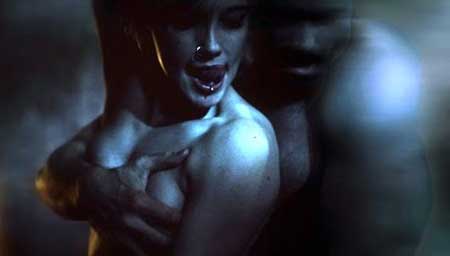 The film does ramp up to a confrontation which at “that point” quickly bring us into the comic book flavor of this film. Nice action scenes, great female confrontations and some general weirdness getting there are the highpoints of “The Scribbler” 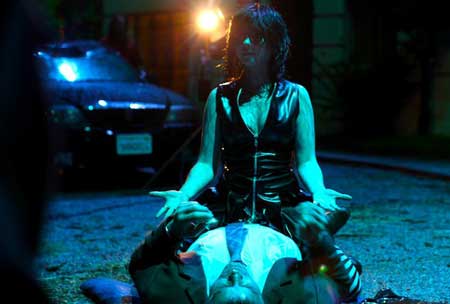 “The Scribbler” is a film I’d watch again. It’s got a unique coolness to it that still stands alone in its debut. Great acting, trippy effects mixed in with some sexual tension make for a well rounded movie experience. Hey……..now that I’m up to speed, the next viewing round will be “that” much more satisfying,.

The film arrives under the distribution of XLrator Media. You can pick up “The Scribbler” on bluray.