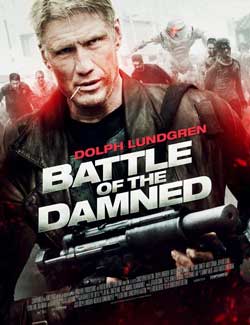 Following a deadly viral outbreak, private military soldier Max Gatling leads a handful of survivors and a ragtag band of robots against an army of the infected.

I’m pretty convinced that at some point in my seventh year on this earth I was approached by some guys in suits who sat me down and said, ‘Now look here, kid. We wanna make a picture, see. What are the kind of things you like?’ Immediately, I spouted off a list of things including zombies, killer robots and at least one of the three boxers from Rocky IV. As soon as I was finished, the two men disappeared in a blinding light. I never had the evidence to prove this had happened. But now, finally, I do. The film that I sold to those (clearly) time travelling film execs was Battle of the Damned. 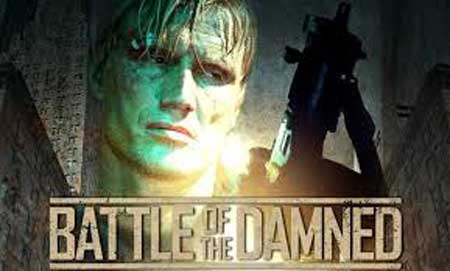 Joking aside, I approached this little DTV with my sceptical hat well and truly on and c**ked to one side. It’s very easy for films of this ilk to promise the world on their covers but deliver next to none of those promises. Whilst there are no real battle to be seen, Battle of the Damned actually delivers on most fronts.

At some point in the future, let’s say tomorrow, a manmade virus spreads through out an unnamed city in Asia, splitting the populace down the middle into survivors and those who like to snack on survivors. Dolph Lundgren plays a mercenary hired to rescue a rich industrialist’s daughter trapped within the confines of the now quarantined city.  When we meet Dolph, he and his team of ‘expendables’ are hotfooting from the city’s zombie populace, having well and truly blown the first part of their mission. Not that Dolph is going to let that get him down. Working to that old maxim ‘If at first you don’t succeed, send the rest of your team home and get on with it yourself’, Dolph ventures off into the city alone with nothing but a gun for company. And well he would, as his name is Max Gatling; a name that recalls memories of Homer Simpson changing his moniker to Max Power. People called Max Gatling walk away from nothing. When a zombie bites one of your team, Max Gatling doesn’t mope, he growls ‘tough luck’ and produces a hunting knife. True story. 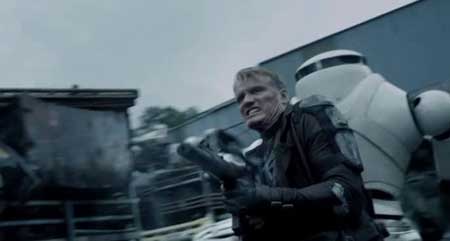 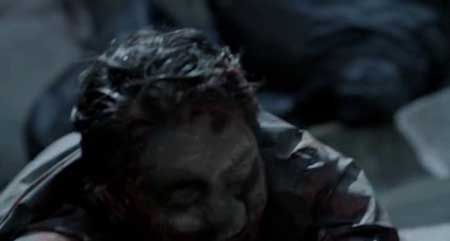 The film does begin to lose traction when he finally catches up with the wayward sprog who is shacked up with a group of survivors, with no desire to return home. These new characters are characters in the broadest possible sense. They are facsimiles of shadows of characters. Yes, characterization is hardly the meat and potatoes of the garden variety action movie, but Battle of the Damned’s approach is akin to your drunk friend telling you a story and having to go back and add bits in. The leader of the survivors, Duke (David Field), has it worst, coming across as someone who is evil because… the script said so? He feverishly chews away any and all scenery. At one point, he even falls to his knees, pounds the ground with his fists and cries ‘Betrayal!’ This is the level of subtlety we’re on here, people. 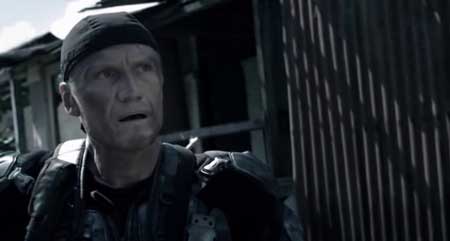 But let’s put all that in a box and push it to the back of the attic, because for the rest of the time Battle of the Damned is running on Fun Factor 9. Writer and Director Christopher Hatton (Sammyville) manages to squeeze in some great set pieces, even at the expense of your usual cinematic conventions. For example, and with no apparent reason, the beginning credits don’t happen till around the 15 minute mark! It’s not just the bombastic though; Hatton manages to work in some tense, low-level scenes. A stand out being Max Gatling – the name must always be said in full – handcuffed to a lamppost and fight off several zombies. It’s a cracking little moment that will teach you it is more than feasible to punch a zombie in the face… with another zombie. 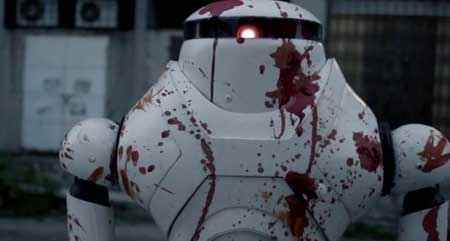 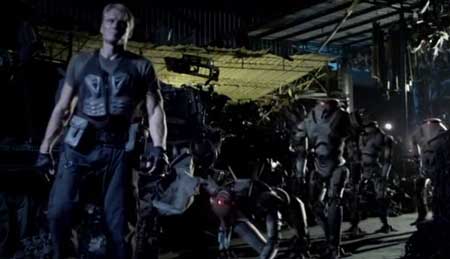 Whilst by no means the greatest addition to the zombie canon, Battle of the Damned has enough going for it to surprise even the most jaded of viewers. Once the killer robots come out to play (a nod to Hatton’s previous film Robotropolis), your action thirst should be well and truly sated.